Like Cayman Islands, Belize will reintroduce travelers with wearable tech

Island reopening plans are complex at best. Often, it is two steps forward and one step back, given the fluid developments of the COVID-19 saga. In the Caribbean, both Belize and the Cayman Islands have postponed their airport reopening dates though reopening plans are similar. Stricter entry requirements can be expanded or, in worst cases, the borders again close to U.S. residents as happened recently in the Bahamas, a decision that was reversed just three days later (but with forced quarantine restrictions added). When Belize and Cayman Islands do reopen to international travelers, both Caribbean nations will deploy a health monitoring device as wearable tech.

The game plan for one destination, Belize, drastically changed on August 5 when the government announced the postponement of its airport reopening. The announcement came just 10 days before its pre-set August 15 date, which marked Phase 3 of Belize’s Travel Reopening Plan. Just two days later, the Cayman Islands followed suit to extend its border closures to October 1; a reopening date was previously set for September 1. Both announcements came within one day of the U.S. State Department advisory lifted its blanket warning against foreign travel.

For Belize, the decision to delay reopening comes after a recent local spike in COVID-19 cases, particularly in the tourism hub of San Pedro Town, Ambergris Caye. Citing the continuing spread of COVID-19 particularly in the U.S., Cayman’s tourism minister Moses Kirkconnell shared their reason. “It is unfortunate that this decision had to be taken; but, we believe it is the most prudent thing to do given the environment beyond our shores”. Even so, Cayman Islands will not open for tourism in October. Commercial flights are not included in Cayman’s first reopening phase; instead, will apply to government-arranged repatriation flights of returning Cayman workers as well as home and property owners. Despite border closures, Belize continues repatriation as Phase 2 of its Travel Reopening Plan. 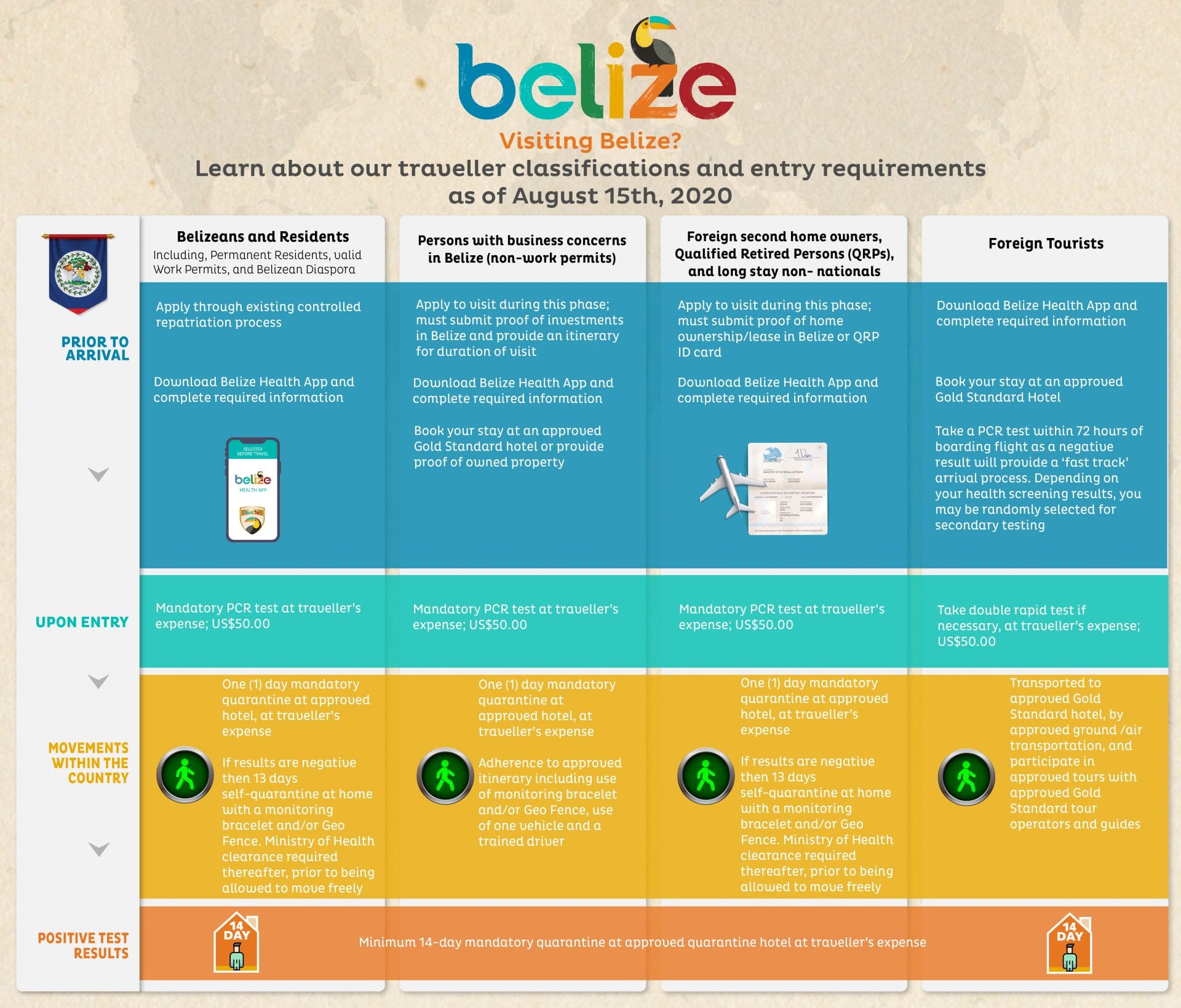 When the borders do reopen to international travelers, both Belize and the Cayman Islands will deploy a health monitoring device; each device will passively monitor incoming travelers while in country. Based on your traveler classification in Belize, your daily health monitoring will include wearable tech and a self-quarantine at home. That is, once testing negative on arrival; this classification applies to all else beside foreign tourists, who will be restricted to their Gold Standard Recognized Hotel while in country. While all foreign tourists will not be required to wear a monitoring bracelet, they will need to check-in daily on the Belize Health App. Similarly, Cayman’s wearable tech will monitor for early COVID-19 symptoms; this timeline is from when they arrive and during their time spent on Grand Cayman, Cayman Brac or Little Cayman.

A Doctor’s Tips on How to Stay Safe While Traveling

Why Choose Belize As Your 2023 Travel Destination

How to Satisfy Your Hunger for Authentic Belize...

Why the Hummingbird Highway is the Best Route...

Best Places to Travel in Belize in February

Why the Hummingbird Highway is the Best...