Belize, with expanses of dense jungle, craggy mountains, and the Belize Barrier Reef—the largest barrier reef system in the Northern Hemisphere—has long been closely connected to its natural endowments. Those diverse ecosystems are not only home to an array of flora and fauna, but they also help to sustain people and their communities. Belize’s coastal wetlands—namely, mangrove forests and seagrass meadows—along with its coral reefs provide many services that benefit humans, biodiversity, and our planet. For example, these habitats help buffer shorelines from severe storms and flooding, offering protection for front-line communities that are vulnerable to the catastrophic effects of climate change. But these vital coastal ecosystems are also under threat. Half of the world’s coastal wetlands have been lost in the past century, and without action to reverse that trend, it will continue. That’s why Belize’s recent move to protect coastal wetlands is so encouraging, and why other countries should follow that lead against climate change.

A crocodile meanders through mangroves in Turneffe Atoll, Belize, where the national government may soon protect these coastal forests as part of its climate commitment to the Paris Agreement. Photo by Michael Melford

A Climate Commitment under the Paris Agreement

Specifically, Belize is drafting plans to include coastal wetland protections as a tenet of its commitment to reduce greenhouse gas emissions and adapt to climate impacts under the Paris Agreement. Coastal wetlands absorb atmospheric carbon at three to five times the rate of terrestrial forests per hectare, and under the Paris Agreement, countries may use such nature-based solutions to offset emissions. The move is just one part of Belize’s broader efforts to ensure sustainable development and reduce emissions while maintaining economic growth, which is particularly pertinent during the COVID-19 pandemic.

Belize is one of 155 countries that have committed to signing the Paris Agreement, which was approved in Paris on December 12, 2015

Parties to the Paris Agreement are required to submit an update to their domestic commitments to combat climate change through a nationally determined contribution (NDC) every five years. Now, in 2020, countries including Belize are working to prioritize policies and actions to increase the ambition of their revised NDCs in a collective effort to better achieve a global reduction in emissions.

As a regional leader, Belize strives to set the bar for enhanced climate action—and coastal wetlands are no exception.

“Through an inter-ministerial working group, with representatives from government, academia, and civil society, the National Climate Change Office is exploring ambitious options for including coastal wetlands as a nature-based solution in its updated NDC. We hope that our effort will inspire both investment in coastal wetlands protection as well as peer learning for countries ready to harness the power of nature as a climate change solution.”

Currently, coastal wetlands such as mangroves, salt marsh, and seagrass beds are the only marine nature-based solutions that the Intergovernmental Panel on Climate Change recognizes for their measurable contributions to a country’s mitigation commitments. The Belize government, with technical support from partners including the World Wildlife Fund and The Pew Charitable Trusts, is exploring a variety of ambitious options to include coastal wetlands in the updated NDC.

According to Arlene Young, director of Belize’s Coastal Zone Management Authority and Institute, “Right now, [Belize] is looking to design strong measures that will help shield our coastal communities from severe storms and flooding, protect valuable nursery habitat for important marine resources, and mitigate against climate change. We have the unique opportunity to provide much-needed protection for mangroves and seagrass beds; both to ameliorate the impacts of climate change as well as to ensure that the environmental, economic, and social benefits are preserved for generations of Belizeans to come.” 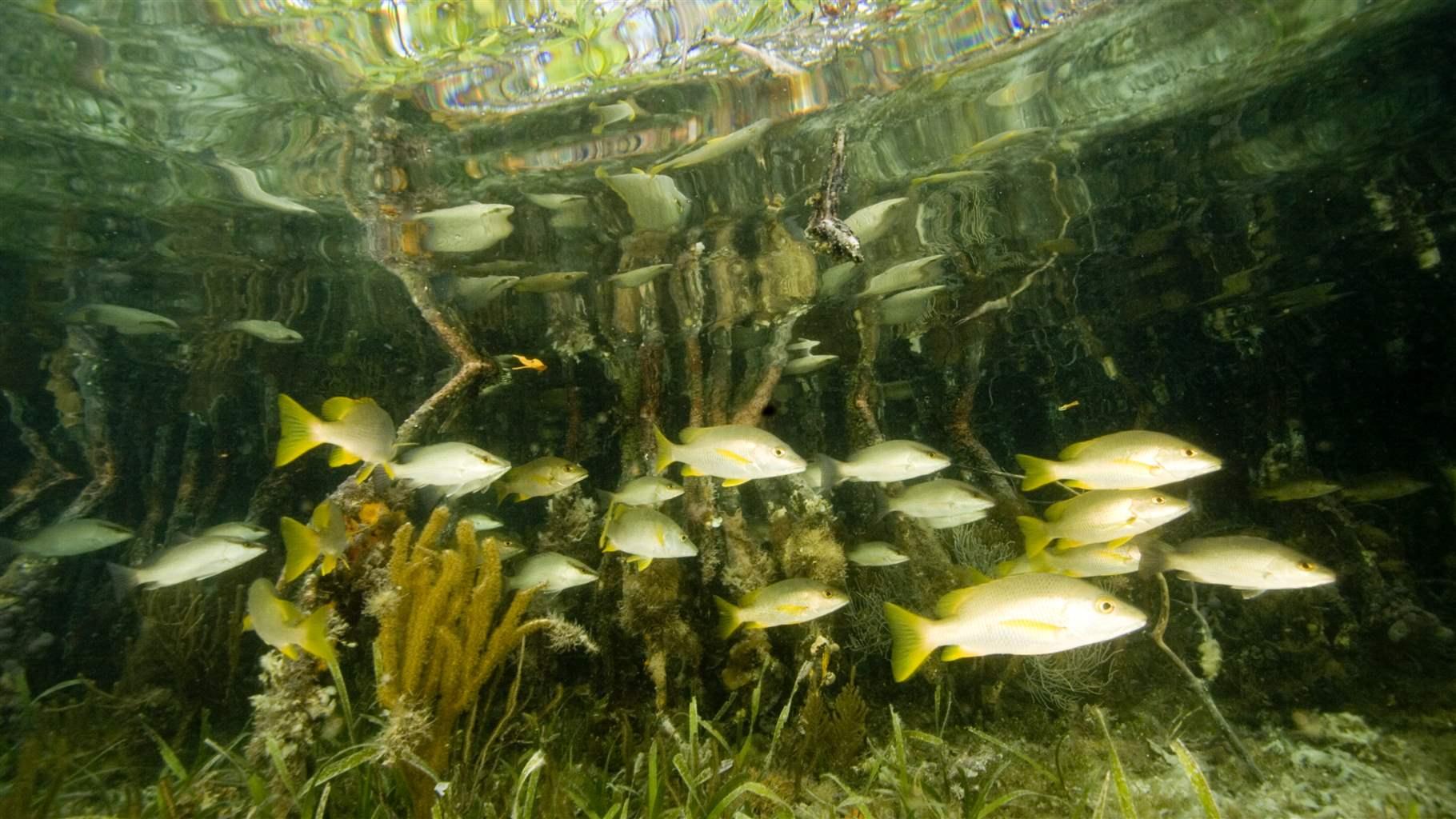 Mangroves provide many services, including nursery and feeding grounds for a variety of species, such as this school of snappers sheltering in Tunicate Cove, Belize. Photo by Tim Laman

In the coming months, Belize officials will consult with stakeholders before finalizing the NDC, which is subject to approval by the country’s Cabinet before formal submission to the United Nations Framework Convention on Climate Change. While the details are still being refined, the government’s ambition and determination for protection of both its people and the planet are clear. Even with already-low emissions levels, the government is striving to make a positive impact, demonstrating commendable leadership on climate policy. Other nations working to update their NDCs should be doing the same.