The Great Blue Hole from Below

Located within Lighthouse Reef Atoll, the Blue Hole Natural Monument is Belize’s most iconic image. Since this tranquil abyss was first revealed to a global audience in The Undersea World of Jacques Cousteau – Secrets of the Sunken Caves (1971), the mysterious geological wonder has been on every diver’s bucket list. The almost perfect circular chasm of deep blue measures 1,000 feet across and is more than 400 feet deep, making it the only “Blue Hole” visible from space. Though its aerial perspective is breathtaking, it’s true wonders lie underwater.

What you’ll see below the Great Blue Hole

Giant stalactites, dripstone sheets and limestone columns (all scientific proof that the cavern formed above sea level) are now inhabited by inquisitive Caribbean Reef Sharks and Black Groupers. Descending through its thermocline is an expedition into darkness. The limestone wall is a calming reference as you slowly sink to the recreational diving limit of 130 feet. Here, an eerie hue of dusky cobalt illuminates greyscale columns carved by erosion during the last ice age. In just a few minutes of immersion, it becomes impossible not to be in awe of nature’s handiwork.

A quick glance down reveals a sandy shelf at 170 feet – the only visible marker until the dark abyss below. Bringing wonder and just a hint of trepidation, the dive certainly makes you wonder how majestic the cave formations must have looked before submersion. During ascent, air bubbles race ahead of you, seeping through the cavern’s cracks to the surface as sharks curiously eye their visitors. As the dive boat’s silhouette reappears in the turquoise tints of the surface, you realize that the 30–minute dive, like time travel, took you back thousands of years, offering a surreal and unique glimpse at the geology of the glacial period. 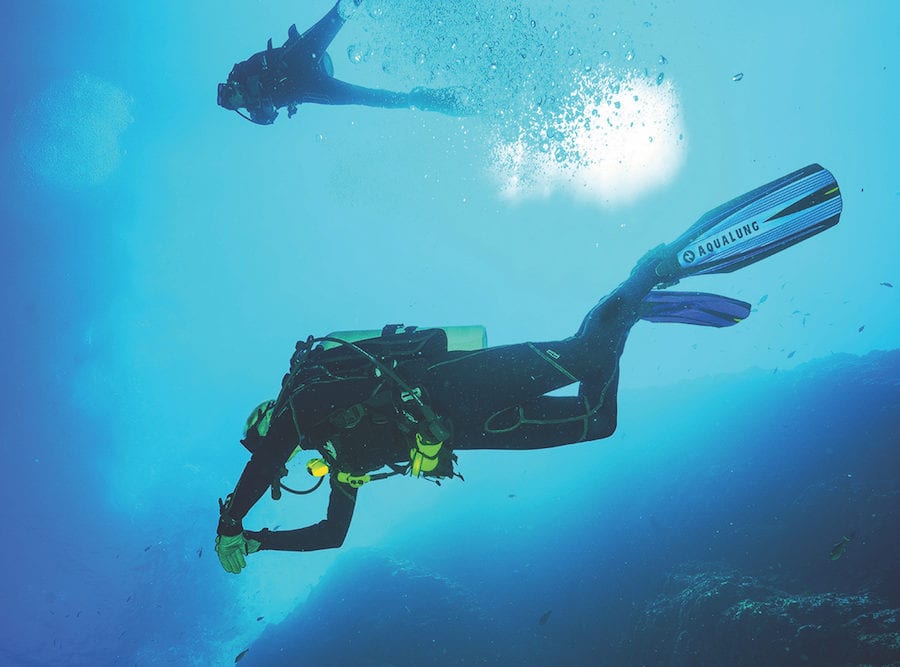 Differing from other high-ranking dives in Belize like “The Aquarium” at nearby Half Moon Caye Wall, the Blue Hole dive is not a colorful coral dive but rather an otherworldly novelty and as close of an experience to cave diving as beginners can (safely) get. It’s easy to appreciate why the Great Blue Hole is the crown jewel of Belize’s Barrier Reef Reserve System (BBRRS) and one of the seven composite locations that comprise the United Nations Educational, Scientific and Cultural Organization (UNESCO) World Heritage Site, designated in 1996. The Blue Hole Natural Monument and its sister site, Half Moon Caye Natural Monument, are proudly co-managed by the Belize Audubon Society.

Do Not Miss the San Pedro Gran Carnaval