North America is smack in the middle of winter, which means it is safe to say the weather is cold and gloomy. So the recent announcement by Condé Nast Traveler of the Best Resorts in the Caribbean, voted as part of Readers Choice Awards 2020, is a warming distraction. And whilst, the resort scene in the Caribbean may have been on pause this year – they have definitely still been on travelers’ minds. From lux beach hideaways to secluded private island getaways, readers share the top 40 resorts that should be on your radar for 2021 Caribbean escapes.

Here are the top 5 in the Caribbean: 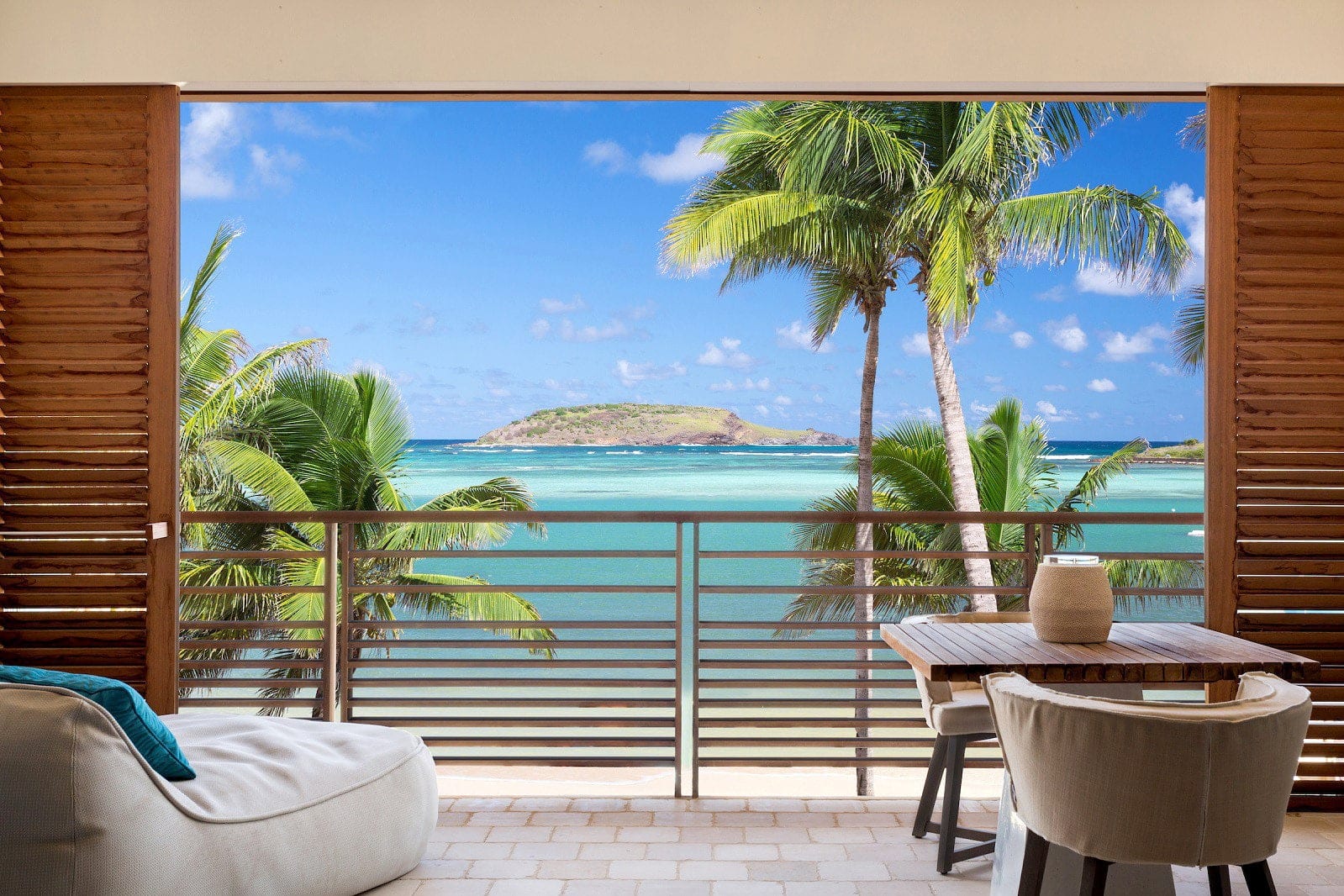 Fairly new to St. Barts’ luxury hotel scene, and in keeping with the island’s low-rise sensibility, Le Barthélemy is a sophisticated winner. Set between a lagoon and Grand Cul-de-Sac beach along the island’s northeastern shore (with views of offshore islets and the distant St. Maarten), the hotel is an education in understated elegance. Rooms are spare and enormous, with lots of wood and one or two pops of bright color—some even have small, rectangular plunge pools. The food at Aux Amis is unabashedly modern French. Water sports enthusiasts have an expanse of calm shallow waters for kayaking, kite-surfing, and snorkeling. Fellow jetsetters aren’t your only company here—a flotilla of a dozen sea turtles that survived the storms of 2017 remain in residence and are easily visible. 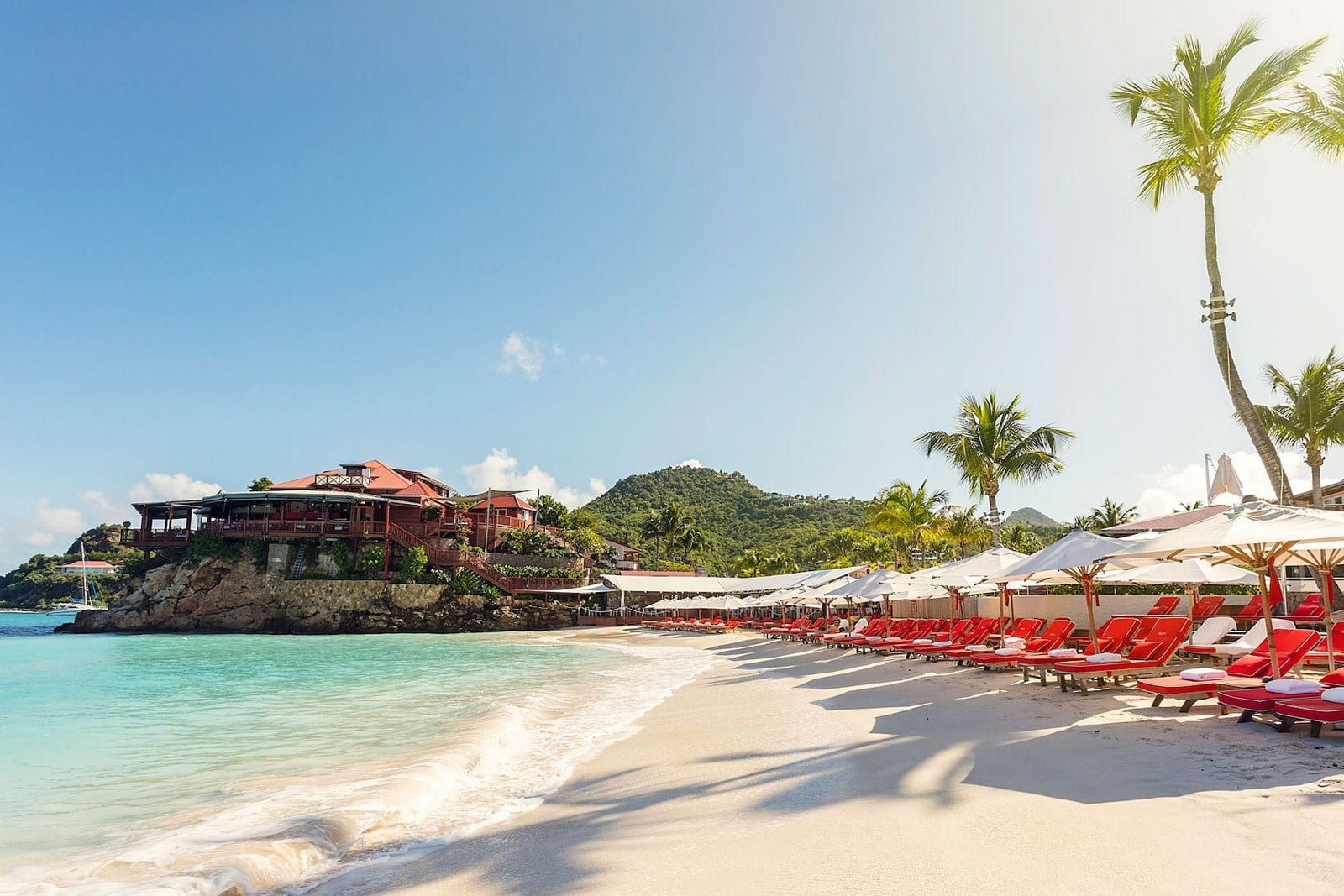 If Bianca Jagger were a hotel, she would be Eden Rock. The hotel sits on a point and is almost entirely surrounded by calm, gin-bottle blue water. Many of the rooms are built into the rock and are simultaneously elegant and cozy. The guests range in nationality—lots of elegant French couples and families, as well as well-heeled American newlyweds and older travelers who have been coming to Eden Rock for decades. Rockstar chef Jean-Georges Vongerichten is in charge of the menu at the main restaurant, Sand Bar, which takes cues from Vongerichten’s ABC and ABCV restaurants. It sounds silly, but you feel a little famous when you’re there. 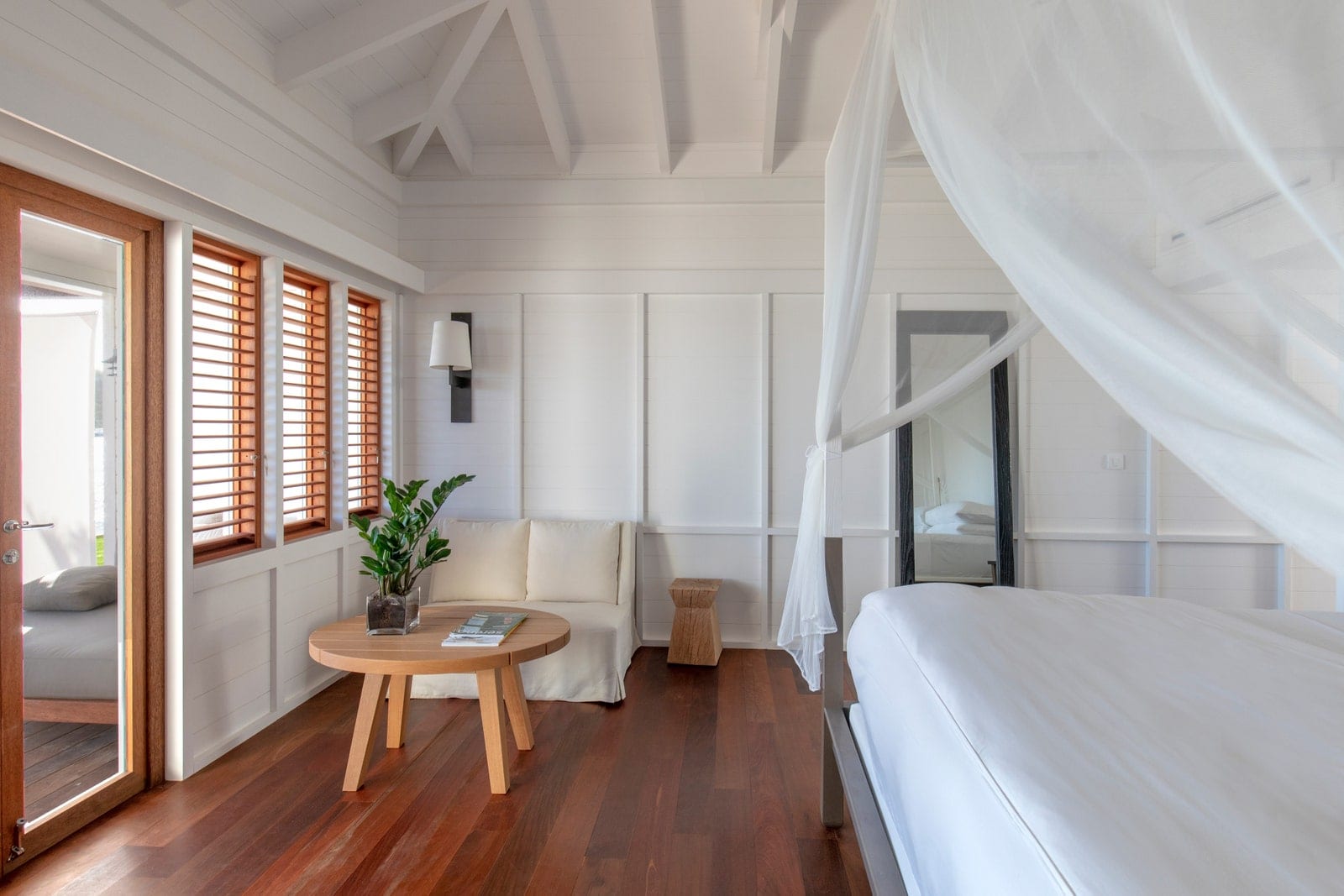 At the quiet end of an idyllic cove in Grand Cul-de-Sac, this cottage colony was utterly remade by master minimalist Christian Liaigre. The decor is elaborately sparse—bare white walls, dark wood floors, and nary a rounded edge or flourish in sight—but with no sacrifice to comfort. The suites and waterfront villas have buttery linens and walled gardens (Grand Suites add settees and bathtubs), and cushioned banquettes make up most of the restaurant’s seating. The resort sustained some damage from Hurricane Irma in September 2017, but has been completely rebuilt with a new beachfront extension to the resort’s namesake restaurant and an expanded spa facility with exclusively curated Valmont products for treatments. 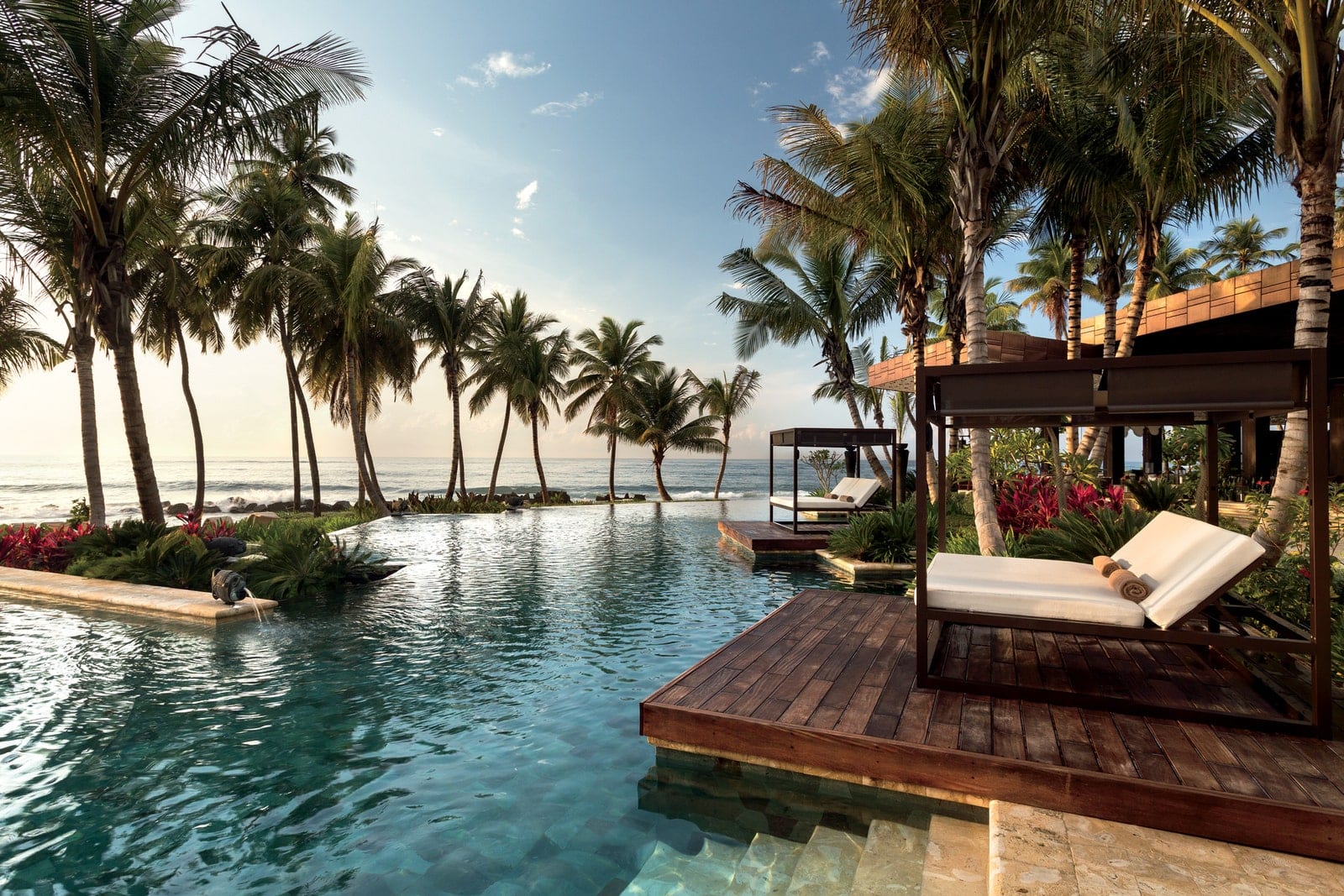 The emphasis at this Ritz-Carlton Reserve—one of four in the world—is on setting. The hotel has undergone many transformations, including after Hurricane Maria in 2017, but ever since Laurance Rockefeller built a sanctuary here it has been all about sea, sand, and lush greenery. Beach-facing terraces and outdoor showers bookend rooms, and museum-grade artwork is scattered on tree branches. But it’s the Spa Botánico, a tropical wonderland, that really fits Rockefeller’s approach. After visiting, you’ll remember the 95-year-old ficus at the entrance most clearly. That, or the treehouse in the canopy where you had the greatest massage of your life. 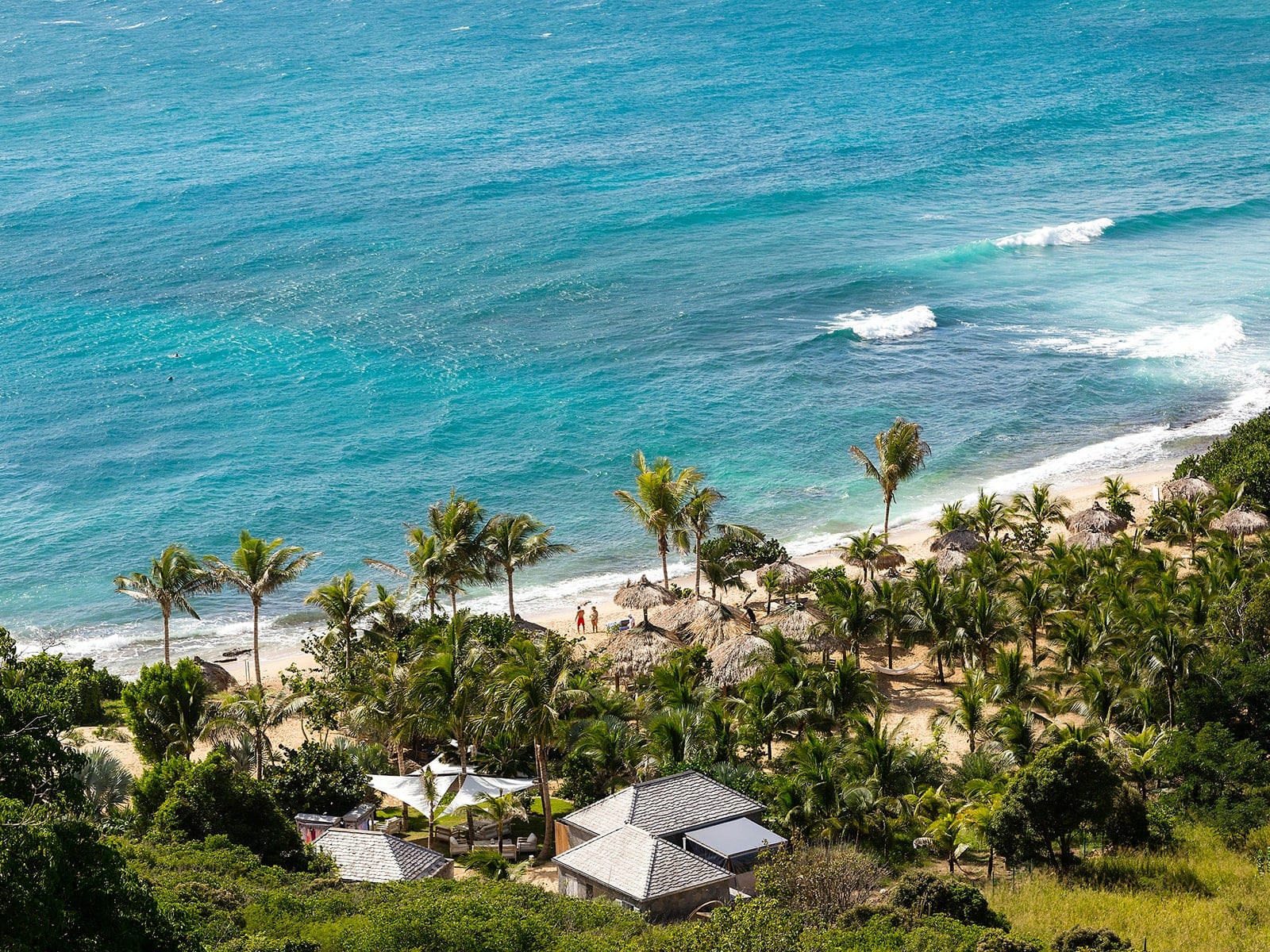 One of the most exclusive resorts in St. Barts and the Caribbean, Hôtel Le Toiny comprises just 22 suites—making it a true getaway for those seeking total privacy. It would be understandable if you never even made it to the beach—each suite has a heated pool with ocean views. The resort’s mega villa, Nureeyev, is a 1960s gem outfitted with modern amenities and a 3,000 square-foot outdoor space, complete with a tiered sun deck that appears to float over the ocean, a private Jacuzzi, and a steam bath.