Eta rapidly grew Monday into a major hurricane and is expected to become a Category 4 storm as it slowly crawls toward Nicaragua. “Eta has become an impressive November hurricane as it continues to undergo rapid strengthening,” the National Hurricane Center (NHC) said. Hurricane Eta is the 28th named storm and the 12th hurricane in a dangerously active season that has brought destruction from Central America to the northern Gulf States and beyond. With Eta, 2020 has tied a record set in 2005 for the most storms that have grown strong enough to be named. The center said in an advisory at 1 p.m. Eastern time that the storm was about 85 miles east of Cabo Gracias a Dios on the border of Nicaragua and Honduras and had sustained winds of up to 120 miles an hour. A hurricane warning is in effect for parts of Nicaragua. Belize also issues a Flood Watch, which is in effect for the Cayo, Belize, Stann Creek and Toledo districts.

Hurricane Eta ties record for the most named storms in an Atlantic hurricane season; threatens 35 inches of rain 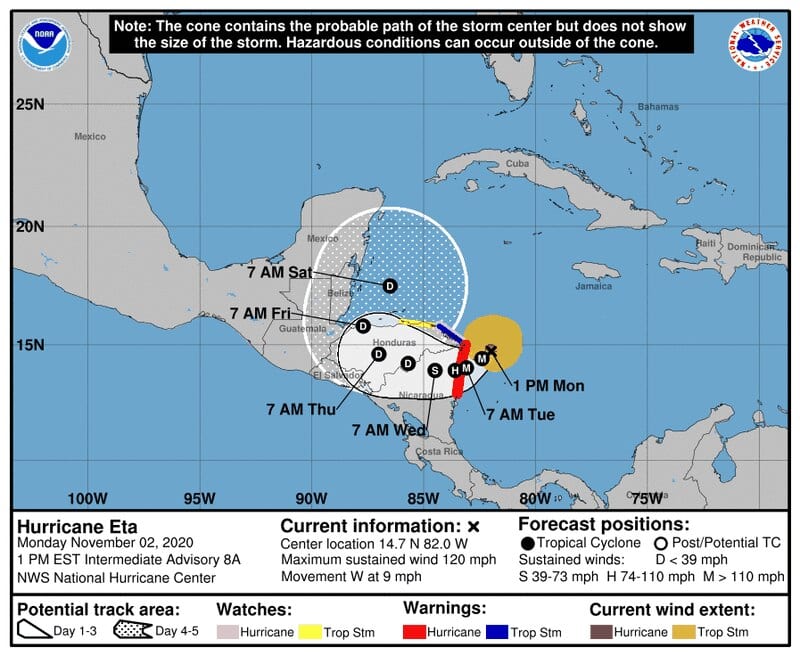 Eta, which formed as a tropical storm over the weekend, was expected to move west throughout Monday morning and turn west-southwest by the afternoon, possibly strengthening to a Category 4 before making landfall in Nicaragua early Tuesday. The storm is then expected to weaken when it moves inland over the northern part of the country through early Wednesday. As much as 25 inches of rain could fall in Nicaragua and Honduras, the hurricane center said, warning of isolated amounts of up to 35 inches. Life-threatening storm surge, damaging winds, flash flooding and landslides across parts of Central America were expected. Some preparations in the region have already begun. The Nicaraguan authorities have issued certain alert levels in the country to help with responding to the storm.

Eta is forecasted to slow down and to start moving to the west-southwest this afternoon and is expected to make landfall along the north-eastern coast of Nicaragua on Tuesday.

At 1:00 pm on November 2, Belize issued Advisory #2 for now Hurricane Eta. Within, the National Meteorological Services of Belize and the National Emergency Management Organization (NEMO) issues a Flood Watch in effect for the Cayo, Belize, Stann Creek and Toledo districts. Southern Belize must brace for and be prepared to respond to severe flooding. Additionally, the NEMO warns those living along rivers and creeks to move to higher grounds, move away from streams and from riversides. Tropical cyclone watches or warnings are not required for Belize since landfall will be well south of Belize over Nicaragua.

Eastern Guatemala and Southern Belize may see between 10 to 20 inches through Thursday, thanks to Hurricane Eta. In the Caribbean, 5 to 10 inches of rain, with a potential for 15 inches, will fall across parts of Jamaica, the Cayman Islands, and southern Haiti over the same period of time.

More Belize Hotels Reopen This Week in the Caribbean