History of the Jankunu Dance

Jankunu, also known as John Canoe in English, is the HABINAHAN WANARAGUA Festival of the Garifuna of southern Belize. According to tradition, this festival is rooted in male secret societies of West Africa, Poro, and Egungun, which was where most of the African slaves were taken by the British and forcibly brought to British Honduras to fuel their exploitation of the logwood trade.  The name comes from “Alusi”, a deity of the Igbo people.

Until perhaps the last decade or so, this exotic ritual was almost a well-kept Belizean secret, and mostly only in southern Belize. This impressive art form is an amalgam of music, dance, mime and cultural symbolism in a formidable display of male supremacy, likely to reinforce their resistance to slavery. It is exclusively for males who dance and play drums. Females are allowed, but only as singers.  In the old days, the dance was reserved for the rest days of the laborers, mostly Christmas night or New Year’s Eve. 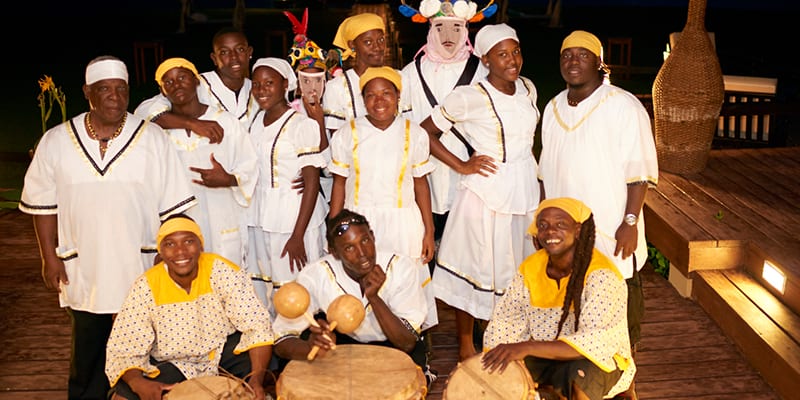 As an ethnic group, the Garifuna resisted slavery, and successfully preserved their language and culture. The Jankunu dance is a satirical dance.  The men dress in English colonial garb and wear a white face mask, mocking the English slave master.  The dance is very demanding and looks excruciating as it is performed on tiptoe with a lot of power coming from the knees. But their skill and discipline are evident. The Jankunu chief does a preliminary short dance and approaches the drummers, there is lots of twirling with outstretched arms. The men take turns in a taunting challenge to display their male prowess. 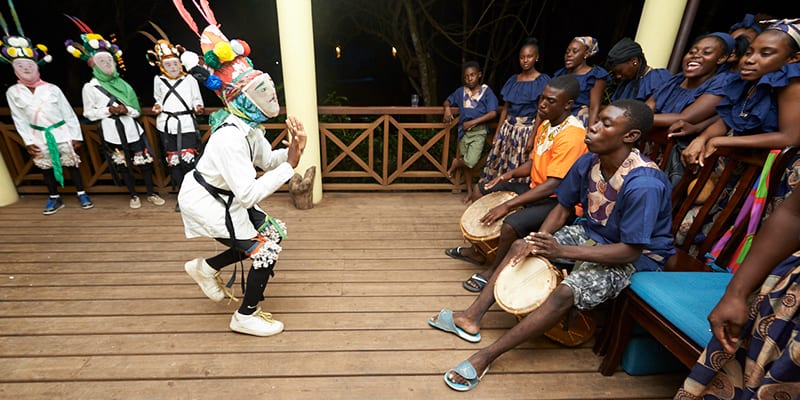 The costumes are spectacular. Pants are dark, and the shirts white or light-colored, embellished with cross ribbons, reminiscent of the cross- gun belts of British military uniforms.  The entire head of each dancer is under wraps, turbans, in African, Arab, Bedouin-style. The headdress is a royal crown embellished with paper rosettes, small round mirrors, and brightly colored feathers. The dancing men wear leggings with bands of hundreds of small seashells. The shells rattle and shake in time with the call of the Primero and Segundo Drums.  These blend with the almost hypnotic singing of the women to create a mesmerizing effect. 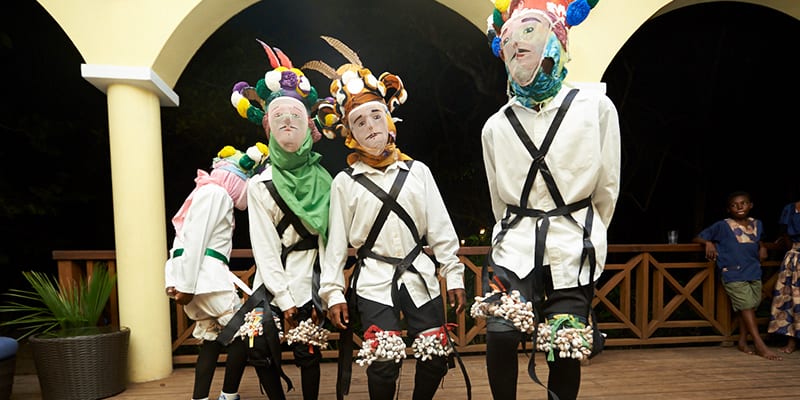 Where to see it?

Today this festival is seen as a competition among the senior Jankunu groups in Southern Belize.  The on-going rivalry is between two powerhouses—Dangriga and the village of Seine Beight, and they take great pride in their participation.

Over the past decade or so, the Festival has become more commercialized.  Tickets are sold usually for the Sunday after Christmas, and it is held in the auditorium of the Ecumenical High School, located at the entrance of Dangriga.