Birthplace of a Culture

The ruins of Santa Rita in Northern Belize are believed by researchers to be the central structures of the ancient Maya city of Chetumal, and the legendary birthplace of the Mestizo culture.

Santa Rita is a small archaeological site just outside Corozal Town, near the Mexican border. A small but impressive pyramid with a grand central staircase rises at the site’s center. From the central platform at the top of the pyramid, one can gaze out over the vast blue-green expanse of the Chetumal Bay.

This vantage point would have been perfect for the ancient Maya as it is strategically positioned at the intersection of two critical trade routes; the great Rio Hondo to the North, and the New River to the South.

The Relationship with Neighboring Countries

Though current day Chetumal is located just over the border in Mexico to the north, evidence found at Santa Rita and the surrounding areas leads researchers to believe that the site is, in fact, the center of the famed Mayan city of Chactemal (Chetumal). Trade objects of foreign origin such as jade, obsidian, and gold, link the site with nearby regions including Northern Yucatan, Highlands Guatemala, and Central Mexico.

These foreign treasures were likely traded for locally produced goods such as cacao, honey, and wax. 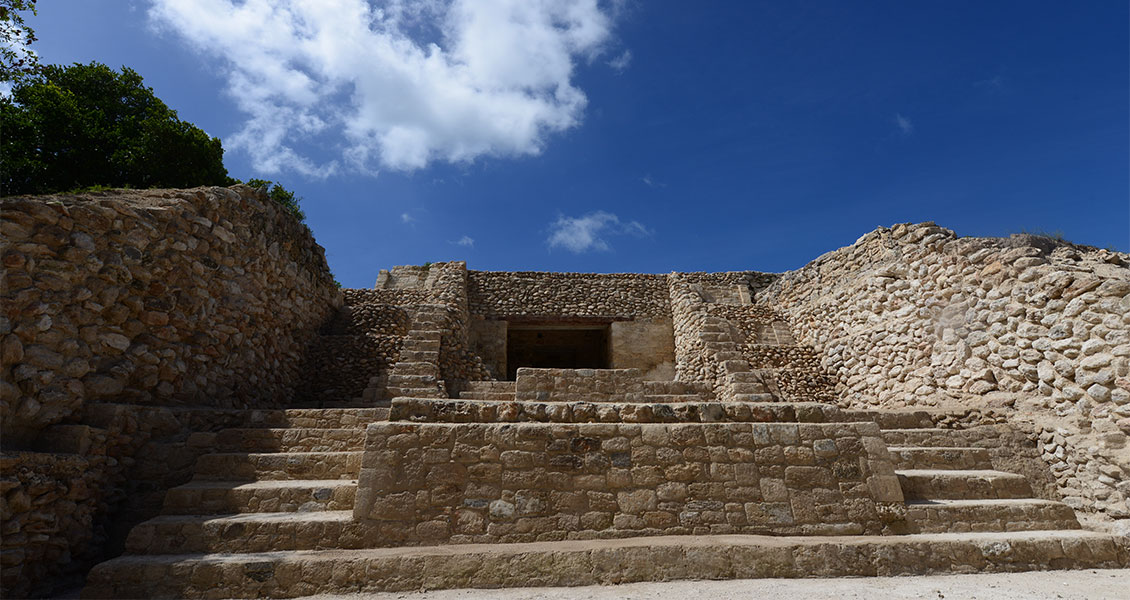 The Birth Birthplace of a Culture

In recent years, the pyramid at Santa Rita has become the stage for a series of wedding reenactments, depicting the famous union of the Mayan Princess Zazil Há of Chactemal, and her Spanish husband, Gonzalo Guerrero.

Guerrero was a Spanish soldier and sailor who was shipwrecked off the coast of the Yucatan Peninsula in 1511. He and one of his mates survived the wreck, but were captured and imprisoned by the Mayans and sold to King Nachán Kan of Chactemal.

Legend has it that Guerrero battled a river alligator in order to protect a local lord, thereby impressing the King, and earning his freedom. Guerrero soon assimilated. He also worked with the warriors of his new clan and taught them European war techniques.

He learned the language, pierced his ears, and even tattooed his skin.

Eventually, Guerrero integrated fully into his new community and was encouraged to marry the King’s daughter, Princess Zazil Há. The children born to Gonzalo Guerrero and Princess Zazil Há are the first recorded children of the ethnic group known as Mestizo.

Making up roughly half the population of Belize, the Mestizo are a mix of American indigenous (often Mayan) and Spanish bloodlines. Mestizo people are spread across the Americas and make up the majority of the population of Latin America.

Today, Santa Rita is mostly quiet, except for the few times when wedding reenactments or other events take place. Across the Rio Hondo, modern-day Chetumal has grown into a bustling border-city marketplace, living up to its ancient namesake.

The Mestizo culture, however, transcends borders – and the story of Gonzalo Guerrero and Princess Zazil Há lives on.

Santa Rita is located on the outskirts of Corozal Town, just off the Northern Highway that leads to Mexico. Take the highway through town heading north, then take the first left after the Mayan pyramid roundabout (traffic circle). The site is one block down on the right.

Maya RuinsOur StoriesWhat to Do in Belize

Mixing Adventure and Luxury In Cayo’s Most Convenient Locale

5 Of The Best Things To Do In Northern Belize

How To Have A Not-so-typical Family Vacation in Belize

What You Should And Shouldn’t Do When Visiting A Maya Site in...