Meet “Short-Tail”, the adult male jaguar nicknamed from his partially missing tail, who is caught on camera in both Belize and Guatemala! This new photo makes him the first individual confirmed to cross the international boundary between the two countries. Wildlife Conservation Society (WCS) scientists published this observation in CATnews, the newsletter of the Cat Specialist Group, a component of the Species Survival Commission of the IUCN. The researchers say this finding highlights the importance of international, transboundary collaboration to study and protect jaguars. Jaguars (Panthera onca) are listed as near threatened on the IUCN Red List. According to the big cat conservation NGO Panthera, the species may be elevated to “vulnerable” in the coming year.

Short-Tail was first photographed in Belize in 2009 with his whole tail, and then with most of it missing (for unknown reasons) in 2011. Later, he was capture on a camera trap in Guatemala in 2013 before returning to Belize in 2014. But, it wasn’t until a conference in 2018 that researchers realized this was the same individual, and the first recorded transboundary jaguar in the region.

“We were surprised and delighted when we saw that ‘Short-Tail’ was photographed by other researchers,” Rony García-Anleu of WCS’s Guatemala program and the paper’s lead author, said in a statement. “This highlights the importance and potential for collaborative work between Belize and Guatemala and across the Maya Forest region.” 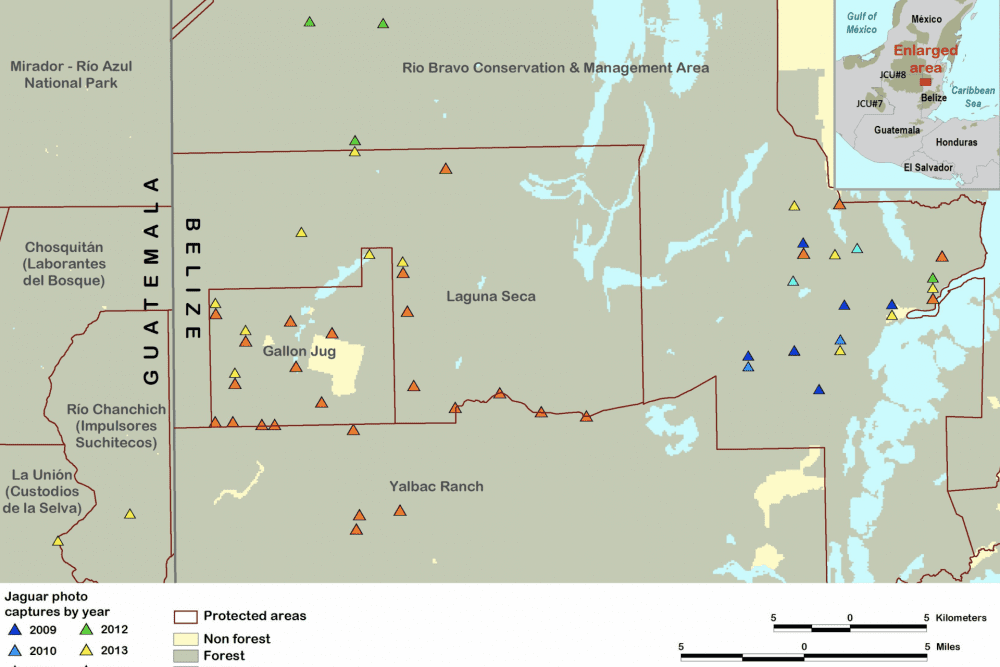 The Maya Forest spans from Colombia to Mexico, covering an area three times the size of Switzerland. One of the five great Mesoamerican forests, the region is a critical area for jaguars and other wildlife, including the endangered Central American spider monkey or Geoffroy’s spider monkey. Not to mention, Belize’s national animal, the Baird’s tapir, as well as the critically endangered Central American river turtle, known as Hickatee in Belize. In 2019, the Government of Belize approved a proposal to protect the Maya Forest corridor; if secured, it would be the largest contiguous area of forest in Central America. 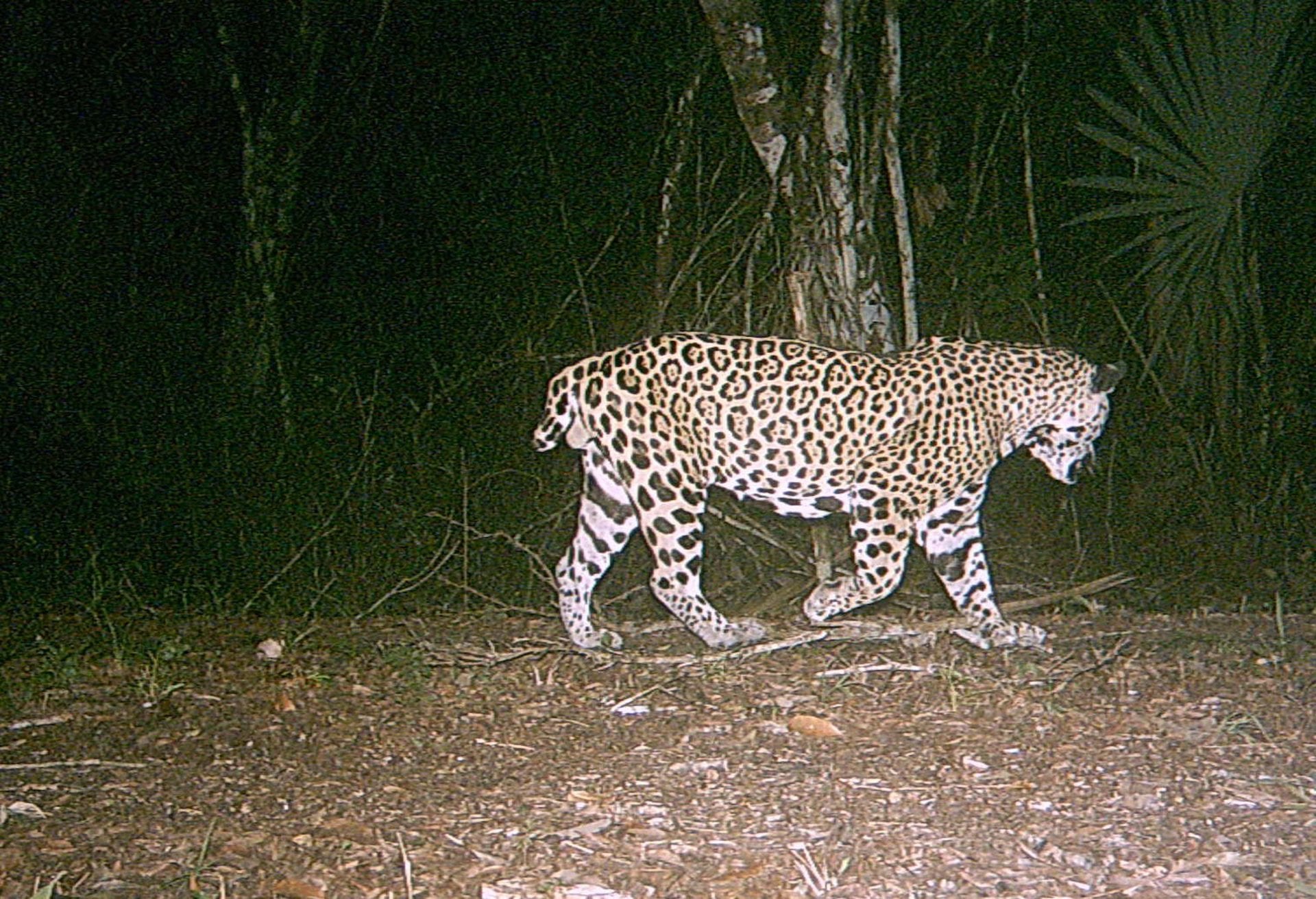 Short Tail in Belize in 2014. Image courtesy of Marcella Kelly/WCS.

“The fact that jaguars have been more resilient and, in many ways, more lucky in their survival than other big cats is EXACTLY why we should focus our attention and conservation efforts on them.”

– Alan Rabinowitz, the late co-founder of Panthera, the big cat conservation nonprofit, said in a 2014 interview with Mongabay.

After all, Dr. Rabinowitz’s pioneering work on big cats began right here in Belize; this later led to the establishment of the world’s first jaguar preserve – Cockscomb Basin Wildlife Sanctuary. His legacy lives on today, globally, through the passion he shared for wildcats and their wild spaces. In Belize, jaguars are one of five wildcat species, who have a large range across the region. However in 2018, 14 countries in the Americas signed a plan to protect 30 high-priority jaguar conservation areas and corridors by 2030, including the Maya Forest. Conservationists hope to protect jaguar habits well before the animal reaches the endangered status of some of its relatives such as tigers and some subspecies of leopards. 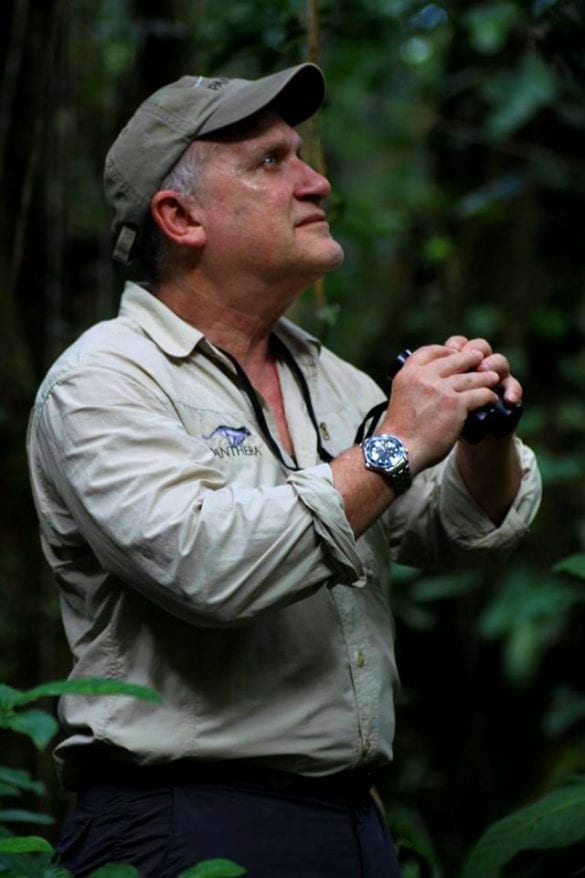 Alan Rabinowitz on his last visit to Belize in 2014, at the Cockscomb Basin Wildlife Sanctuary. 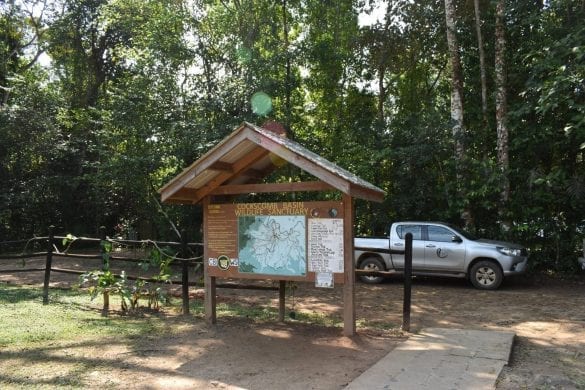 “The jaguar can teach us valuable lessons about how we can save other more threatened species. And, how humans themselves can better survive a very uncertain, turbulent future.”

Article adapted from www.MongaBay.com. Read more on ‘Short-Tail’ the jaguar in Belize here.

What It’s Like to Visit the Caribbean Right Now

Planning a Wedding? You’ll Rethink Plans Once You...

We could spend all day here 🌊 Located offshore

How early is too early to plan your 2023 Belize va

If you’re visiting for the first time and worryi