Astonishingly, some of the largest animals to have ever roamed Earth are still alive today. That includes the world’s largest fish, the whale shark. Growing up to 60 feet – or as long as a school bus – with a weight of 50,000 pounds, these endangered giants are considered a part of the shark family. But, no, whale sharks are not dangerous. With mouths up to five feet wide, whale sharks are actually very docile and extremely agreeable to swimming alongside humans. Leisurely grazing at about 3 miles an hour with gulps of entire schools of krill and plankton, a whale shark can be found in all tropical oceans. Although massive, whale sharks are only one of three known shark species that filter feed; in Belize, they do so in the southern tip of the country. Between March and June, visitors of the Gladden Spit Marine Reserve have a unique chance to swim with these gentle giants.

Preferring warm waters, the movements of whale sharks are slow but powerful. And for this reason, visitors of Southern Belize can experience the awe of human’s humble size next to whale sharks by snorkel or scuba offshore Placencia. Grab your gear and book a tour during their seasonal appearance in Belize with a local tour operator, like Splash Dive Centre, and jump in with the world’s largest fish. And with Splash Dive Centre, multiple monitoring systems, including direct collaboration with the marine park rangers, ensure the best possible whale shark experience in Belize. Splash Centre’s captain yells out there’s a large school of snapper below on his fish finder – an excellent tool to indirectly track whale sharks who migrate in pursuit of Belize’s spawning aggregation of snapper. 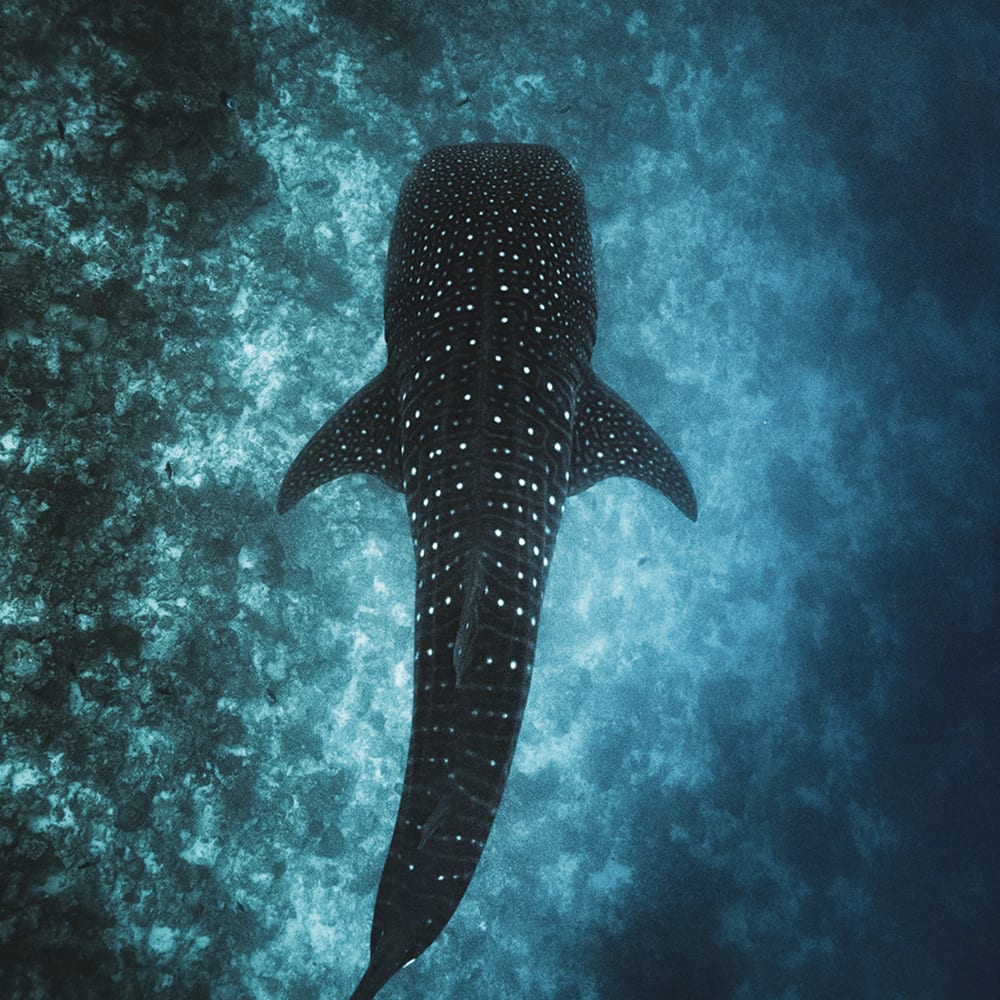 Armed with flippers on and excitement deep within, dive into the aqua waters of the Gladden Spit Marine Reserve. Divers descend to a maximum depth of 80 feet, huddling close in a circle for their air bubbles help to mimic spawning snappers. As soon as the bubbles clear, if you’re lucky, inhale before peering down with excitement: a whale shark lies directly under you. Instead of fear, feel awe. Admire the lateral ridges along its back, which gives its body a muscular grace. Five long vertical gills on each side flap open and closed, expelling water. Its grey skin—about 4 inches thick—is patterned with yellowish white lines and spots. Each whale shark has its own spot pattern, like a fingerprint; this allows scientists, like Belize’s Whale Shark Working Group, to recognize and track them.

How to Admire Whale Sharks in Belize

On your excursions, the whale sharks will descend – making its elegant silhouette growing smaller and smaller. For a moment, it seems the enormous fish will vanish into the dark blue depths. Then, suddenly, it comes back to the surface and pauses, opening its mouth wide to feed. Each of its eyes is only about the size of a silver dollar. In Belize, most whale sharks spotted by Rangers of the reserve range from 25 to 35 feet long. Underwater, the giants seem to emerge from nowhere, sometimes three at a time. Up close, you can see minuscule, sandpapery bumps on its pinkish grey skin. Not only does booking a local tour with Splash Dive Centre support responsible operators, but each visit to the Gladden Spit Marine Reserve helps to fund conservation. Hand-in-hand, this involvement of the local community in stewardship means future generations can continue enjoying this authentic experience in Belize.

What To Expect When Grocery Shopping in San...

Culture, Cuisine, Adventure: You Can Pick Your Own...

What To Expect When Grocery Shopping in...

The Rise of Celebration Travel: A Belize...