Caye CaulkerTravelingWhat to Do in Belize

All The Best Ways To See Caye Caulker, According To A Belize Local

The pocket-sized island of Caye Caulker is easily one of the most photogenic cayes in all of Belize. Rainbow-colored houses and storefronts pepper the landscape and the ever-present stark-white sand with abounding palm trees truly embody the “beach vibes.” It’s no wonder, then, that travelers choose to explore the Instagrammable island in more ways than one. Here are some of the best ways to see Caye Caulker when exploring the island a short flight away from Belize City.

Paddleboarding around the island. 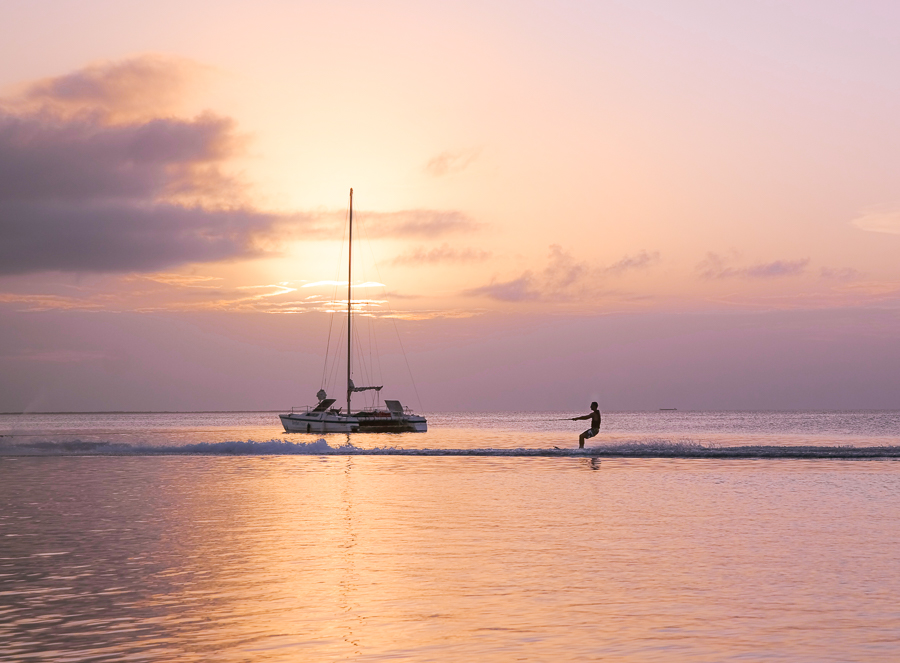 Get around the less than 5-mile isle non-traditionally with wakeboarding, paddleboarding, or kayaking. Image via Little Wanderbook

Arguably one of the most underrated ways to see Caye Caulker from a new angle is atop a paddleboard. You could hop on the eastern side of the island and slowly paddle around through the famed “Split” and make your way to the Western side. Take your time as you weave between cerulean waves – the views will be especially exceptional if you start in the late evening and arrive on the other side just as the sun dips low on the horizon. If you’d rather another notch on your explore scale, head out wakeboarding.

Bicycling from north to south. 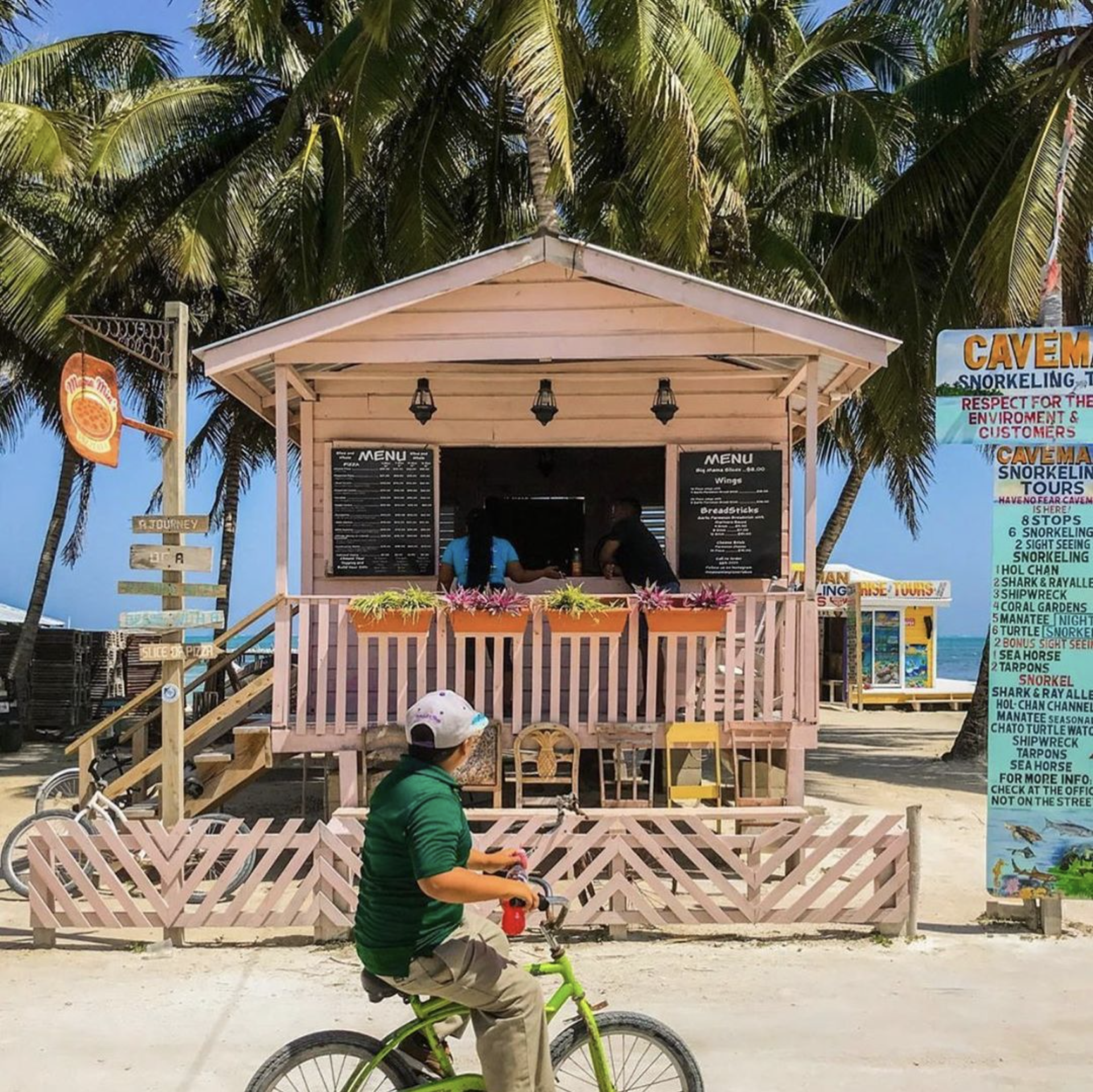 Stretching about five miles from top to bottom, Caye Caulker already is a low-trafficked island. The sleepy caye oozes a carefree vibe and is evident with many residents choosing bicycles as their main transport for simple errands. Most of the hotels in Caye Caulker even offer complimentary bicycles to guests. Pedaling from the southern end to the Split will probably take you about 15 minutes, tops. It’s also a convenient and easy way to move about the island, not to mention very eco-friendly. 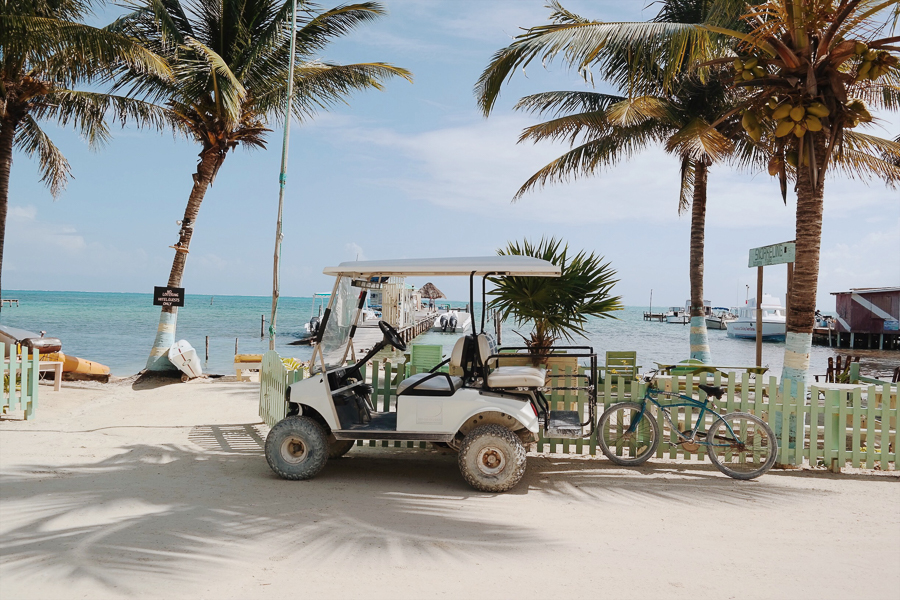 Get around by buggy on Caye Caulker. Image via Little Wanderbook

With Caye Caulker being a mostly car-free destination, island buggies – a.k.a golf carts – are the preferred mode of transport for many locals. You’ll notice them zipping up and down sandy lanes as soon as you arrive on the island. Golf carts are a fast and easy way to get from point A to point B, especially on an island as tiny as Caye Caulker. They are also quite fun and refreshing to drive due to their open-air concept. If you’ll be doing a lot of exploring, you can opt to rent one of your own once you arrive on the island or ask your hotel concierge to assist you in booking one. 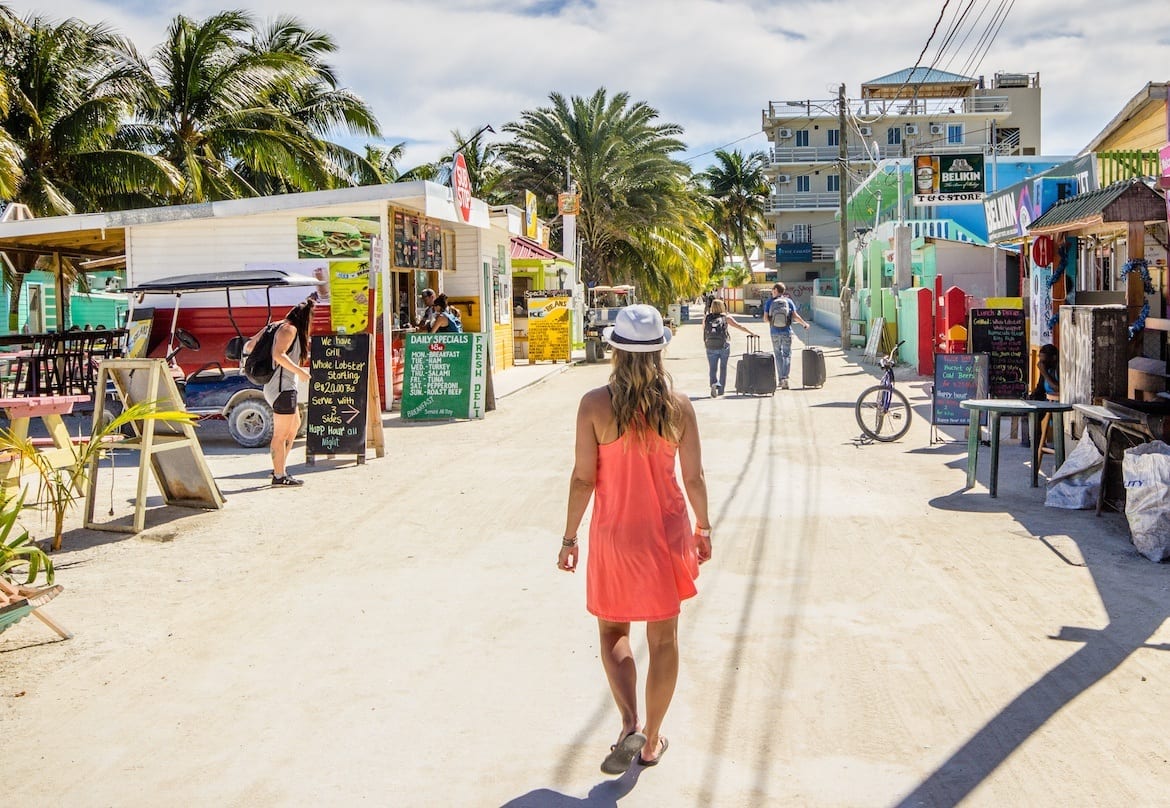 Of course, some may argue the best way to drink in all the beauties of Caye Caulker is to do it slowly. This means doing all your exploring on foot. The island’s motto is “go slow” after all, an adage you’ll be reminded of if you so much as speedwalk past the islanders. Bare-footed and worry-free is the way to go when on Caye Caulker, according to the caye’s locals. Besides, walking across the island – which only takes about a minute – gives you ample chance to get to know the local islanders and the caye’s numerous furry four-footed friends.

Caye Caulker boasts an intimacy rarely seen in islands of its popularity. Out here, everything is taken down a notch, and travelers become embedded in the ecosystem of the island. Whether walking about snapping photos of colorful houses or seeing the island from a new angle on a paddleboard, there are more ways than one to appreciate charming Caye Caulker.

Header image of the Caye Caulker beach via Hey Ciara.

Heatwave: Why A Belize Private Island Is The Hottest Way To Vacation This Summer