All About The First-Ever Belize International Music and Food Festival

Summer has always been a time for live entertainment with concerts and festivals happening across the Caribbean. In San Pedro Town on the island of Ambergris Caye in Belize is no different, where festivities are held to ride out the slow tourism season. This year, a new and dynamic event came into the picture at San Pedro’s Saca Chispas Field drawing large crowds to the caye. The Belize International Music and Food Festival (BIMFF), spearheaded by the Belize Tourism Board (BTB), saw July 30th and 31st packed with the best local cuisine and musical artists from Belize, the Caribbean, Africa, and Mexico. It was an event like no other and here, we give you a summary of how things went.

In previous years, early August would typically be time for the International Costa Maya Festival that would attract the masses to the island, including contestants from fellow Central American countries. But this time it is absent, with plans for the popular festival to take place later this year. Instead, the BIMFF, a brainchild of the BTB, set the record for the event with the most artists on a stage ever held in the country. It was reported that most hotels in the vicinity of downtown San Pedro were sold out, which also included golf cart rentals, as the island was visited by an army of revelers from other parts of the country. 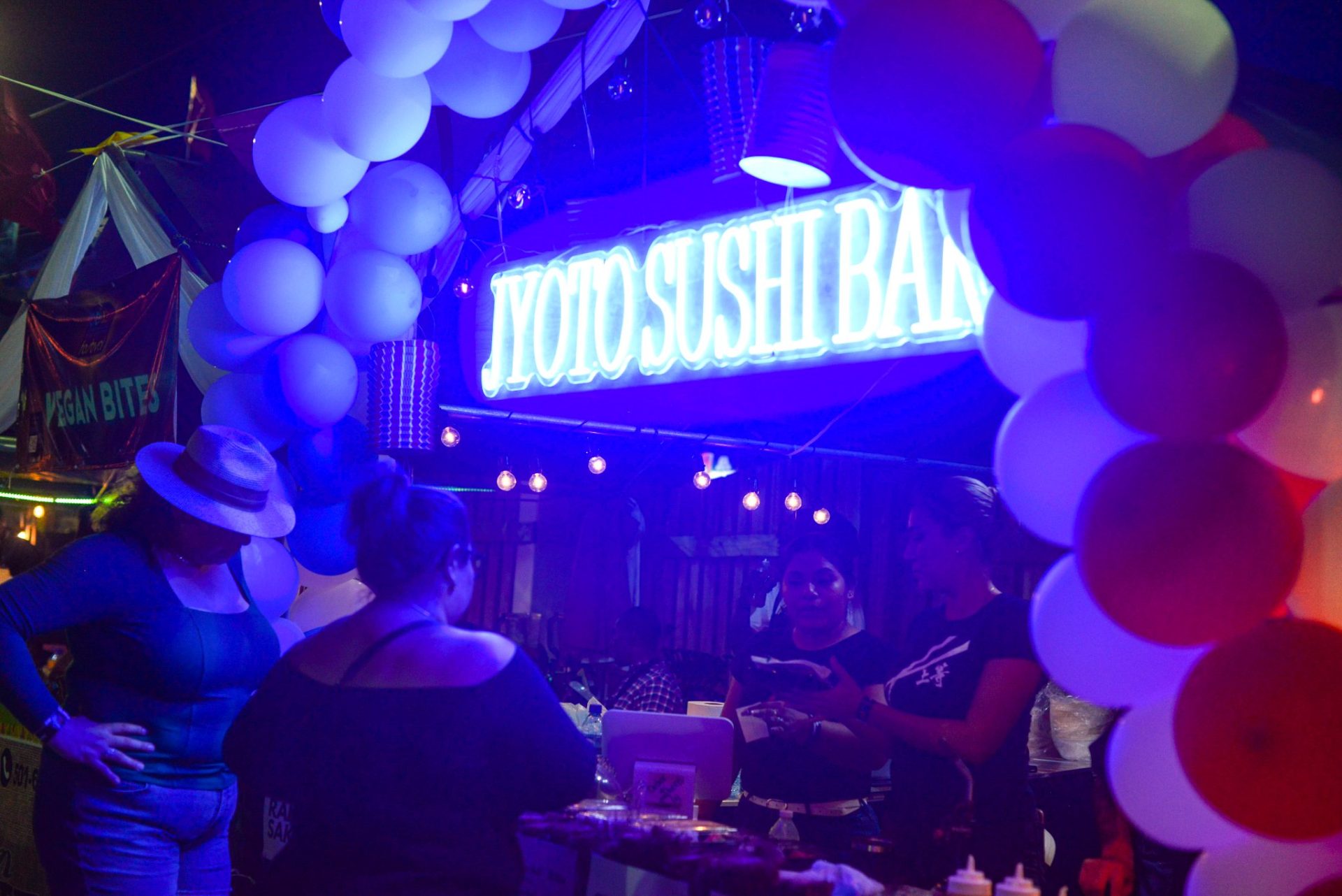 During each day of the festivity, the venue, Saca Chispas field, was open to the public at no charge to visit the various food booths. Over 20 restaurants participated in the food part of the event offering some of their best food delicacies. The grounds were accessible to the public until 3 PM each day. Still, the grub options continued to be available throughout the evening during the music part of the festival for those with a ticket to attend the concerts. The tickets allow people to be in General, VIP, and Ultra VIP admission.

The first night offered a show with a total of 15 artists on stage. Hosts DJ Dalla and TV personality William Neal alongside BTB rep Juel Lewis introduced each one of them throughout the evening. Some of the Belizean performers included Denise Castillo, Stig Da Artist, Britnney Starr, and Dajah. Local DJs like Cloud 9 also serenaded the massive crowd, along with Jamaican DJ Supa Twitch. The artists’ performances highlighted Timaya from Nigeria, plus Jamaica’s Demarco and Barrington Levy. However, the most anticipated performance, essentially closing the first day of the festival, was that of Jamaican Grammy Award-winning singer Koffee.

The second day saw another jam-packed Saca Chispas with 12 total performances. The atmosphere was once again very celebratory as Belizean stars took to the stage. Ernestine Carballo, TLC, Flako Leslie, and Belize’s Punta King Supa G put everyone to dance. Other artists on the roster during the first hours of the evening show included Lil Natty and Thunda, Farmer Nappy, and TR Shine.

As the show continued it was time for the popular Mexican/Colombian band Sonora Dinamita. Ultimately, the cumbia genre had everyone dancing across the field. Performances by St. Lucian Teddyson John and international DJ Int’l Stephen were other numbers on stage that the crowd jeered on. To cap off the night, soca stars Ricardo Drue and Patrice Roberts — who recently got engaged at the end of July — brought hype and interactive performances ending past 4 am.

The first-of-its-kind festivity has been deemed successful by the many spectators as they enjoyed a two-day show with so many artists. Revelers are now waiting to hear if there will be a repeat next year and if the Music & Food festival will be held at a different location in Belize.

All images courtesy of the Belize Tourism Board.

Win A 4-Night Stay To Ray Caye, A Private Island Resort In Belize