Why Belize is a Birder’s Destination

Being both Caribbean and Central American, our tiny English-speaking nation, nestled at the base of the Yucatan Peninsula, is a naturalist’s delight – and birders have certainly learned Mother Nature’s best kept secret. With 85 ecosystems and nearly 600 bird species to explore inside 9,000 square miles, Belize contains a vast diversity of forests from pine savanna to lowland rainforest to ecologically-rich island cayes and atolls. Alongside such flora, incredible fauna lies just within reach for new and experienced birders alike, revealing a neotropical birding adventure.

A #BirdingNation from North to South

Explore fertile wetlands, savannas, and mountainous terrain for avifauna in Southern Belize by waking up within Cockscomb Basin Wildlife Sanctuary. Rustic accommodations place you in the heart of the world’s first jaguar preserve; your alarm is a cacophony of the jungle, like the sweet sounding White- breasted Wood Wren and Northern Schiffornis. Within the 127,000 protected acres of Cockscomb Basin Wildlife Sanctuary, all five of Belize’s wildcats, boisterous howler monkeys, rambunctious game birds, and even the boar-like Peccaries of Belize roam freely. Venture out to the coastline of Hopkins Village for lunch, but keep your binoculars handy for both pelagic and wetland birding. If you’re feeling adventurous, end your day with an adrenaline-pumping zipline in Bocawina National Park.

An early departure out of Western Belize towards Las Cuevas lands you within Belize’s largest national park, Chiquibul National Park, where pristine greenery envelopes you in the Scarlet Macaw’s first choice for their breeding grounds. Grab lunch as you head towards the Mountain Pine Ridge Reserve for an afternoon of high-elevation species, including the critically endangered Orange-Breasted Falcon and the mega-rare Solitary Eagle. Reward yourself with a dip in Rio on Pools and end with the awe of Belize’s 1,000 Foot Falls.

Venture to Northern Belize and explore the vast wetland diversity of Crooked Tree Wildlife Sanctuary by boat to find conglomerations of Roseate Spoonbills, Fulvous Whistling-Ducks, White Ibises. Not to mention, the magnificent Jabiru Strk – the tallest flying bird in Central and South America. Grab a northern favorite fast food, like corn-based street tacos, before ending at the Maya site of Lamanai. Up for more? Book a night boat tour offered along the New River to yield the much-sought after Yucatan Nightjar, Northern Potoo, and Yucatan Poorwill. 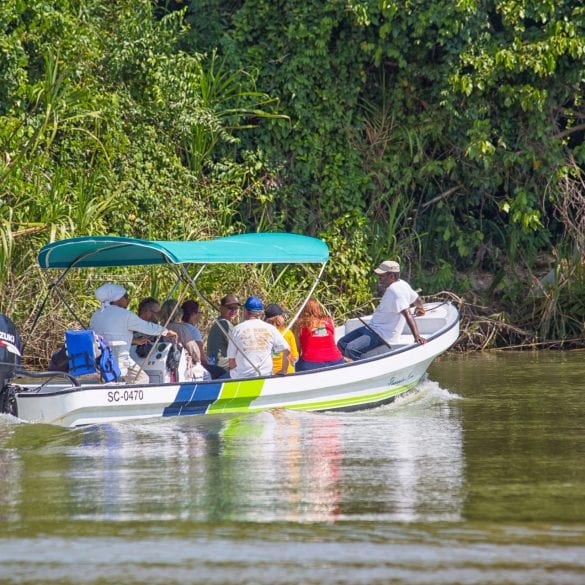 All Photos by Francis Canto Jr.

As eco-tourism in Belize grows, lodges are increasingly catering to birders. Plenty of local guides are ready to jump headfirst into your next avian adventure! Wherever you go, hiring a locally-trained bird guide enhances your birding experience while strengthening Belize’s eco-economy. Birding provides an incentive to safeguard natural habitats for our feathered-friends, while improving livelihoods. Besides, each visit funds conservation – just another reason to make protected areas your new cross-country adventure. So, start planning your bucket list of Belizean lifers in this #BirdingNation!

Ready to plan your next big avian adventure? Save the date for the 2021 Belize Birding Festival!

Written by Carolee Chanona for the 2020 Belize Gold Book.

Feature photo by Belize Tourism Board. All other photos © caption. Article found on page 84 of the 2020 Belize Gold Book. Read more articles from the #BelizeGoldBook below:

Why Belize is a Natural Niche for Investment

Why Belize is a Birder’s Destination

Diving the Doorstep of the Western Caribbean: The Belize Barrier Reef

Belize by Night: Adventures in Belize Brought to Light

Vacationing on the Caribbean Rim in Belize

A Cinematic Experience in Belize: The Family Coppola Hideaways

What to Consider Before Booking a Villa or...

Island time is the best time ☀️ What’s your

Hidden gems of Belize 🌿 Have you been to our Ma

All roads lead to Belize! ✈️ We are officially

Belize, a tiny country that is home to amazing sno

Why Belize is a Natural Niche for...