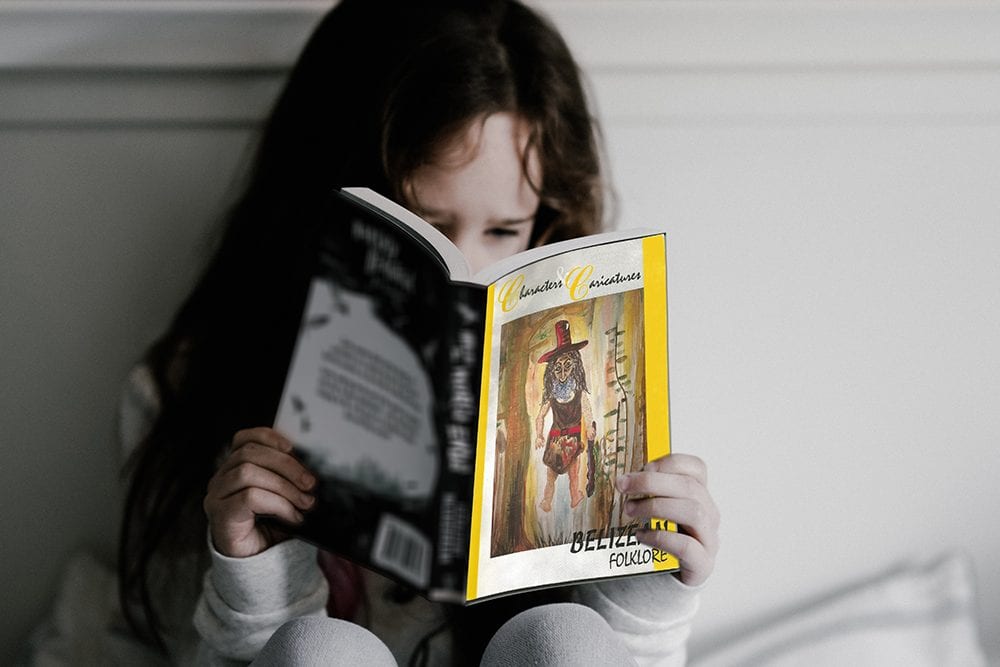 Tata Duende, La Llorona, Anansi, Alux; these are all characters from Belizean Folklore and are familiar to Belizeans, no matter their origin. These stories are part of the oral tradition of village people, and men who toiled in the remote bush camps—cane farmers, loggers, and chicleros. In remote areas, these stories were created to entertain and gather the family, but also served the purpose of deterring men from frequenting rum shops, and to keep children from straying too far from home. Further, they were passed down from myths, legends, omens, and proverbs as part of a belief system that has existed across the years and narrated by every ethnic group.

This is not a literary tradition, nor is it read in school.  This was the lore of the unschooled salt of the earth.  Of course, over the years, the stories have been embellished and enhanced, taking on a different tenor as the teller was inspired. Some tales have one specific ethnic origin, while others derive from two or more groups. These characters straddle the worlds of fantasy and reality and range from the mystical and mischievous to the truly creepy.

The story of the Alux comes from the Yucatec Maya from the western village of Succotz.  He is said to be only one foot tall but stocky, strong, and full of himself because he is guardian of the forest and the weather and forest animals obey him. Farmers who wanted protection for their crops and families visited the high priest of the village with offerings of food and the priest would then fashion a clay effigy of this little man mixing it with fluids and skins of animals so that he would possess the finest traits of forest creatures. The Alux was given corn drink and tortillas, and he would, in turn, bring favorable weather, and keep the animals from damaging their fields. Hunters, fishermen and chicle laborers also used to tell of tiny dwellings they came across which were surely the abode of the Alux.

Anansi is a spider and the most popular Creole folklore personality. Although he is small and possesses the most hateful characteristics, he is outstanding because of his intelligence and sharp wit.  Anansi is a greedy, selfish, arrogant, lying and manipulative thief.  But he has a way of getting his way and making fools of other species much bigger and stronger than him.  He has a “sweet mouth” and is in a constant battle of wits with “Bra Tiger” (Brother Tiger). He manages to humiliate him, even riding him like a horse in front of whole villages.  It is common in Belize to refer to any incredible tall tale as an Anansi story—a lie.

Spanish for crying woman, this legend is part of Mestizo tradition. It is said that this beauty was once married to a wealthy landowner who used to travel and leave her on her own.  She fell pregnant as the result of an illicit affair, and, knowing that she could not convince her husband that the child was his, drowned her baby in the river. Consequently, she was cursed by God and spends her life sitting on a rock crying by the river or wandering the forest in search of men who would pity her or be attracted by her beauty. If she manages to seduce them, she morphs into a serpent and smothers them to death.  This story, more than likely came from the womenfolk as a scare tactic for their husbands who stayed in the rum shops with their cronies until very late.

In rural areas of Belize, very often the fire hearth is a central part of a household, and often in a separate hut from the main house. Moreover, part of every housewife’s evening routine was to check that all sparks on the hearth had been put out and to cover properly all leftover food. Stories arose of little men frolicking in the ash. These creatures are harmless and very tiny, and camouflaged, as their skin was exactly the color of ash.  Their name Hashishi means ash and Pampi means a very tiny creature, much smaller than a duende(dwarf).  They like to wriggle in the ash, with only their little heads sticking out or feasting on leftover food.  Sometimes they ventured to the roadside, glowing and playing and distracting drivers.

One could compare these tales to Aesop’s Fables.  Some have a moral or message, some are cautionary tales.  However, there is no doubt that they are a true representation of Belizean culture.

The Garinagu People Of Belize