Mangroves are a group of trees especially adapted for survival in very salty soil and water conditions, as well as conditions of low oxygen, and even flooding.  Belize is home to three types of mangrove (Red, Black, and White) and subspecies known as Buttonwood.  Mangroves cover 3.4% of Belize’s land surface, occurring in a belt along the coastal zone, also along the Western Highway, 12 miles from the coast. Sometimes they are found near rivers in freshwater, thriving on the nutrients from upstream which collect among their dense roots.

Mangroves are designed to use energy from non-living organic material known as detritus, in the sea, mudflat or river.  Along coasts and cayes, mangroves are nourished by algae and seagrass detritus, deposited among their roots by the tides. Their roots have organs in their roots, which allow them to take in oxygen, even if there is very little in their habitat.  Bacteria requiring sulfur for their life process are so common here that the mangrove smell associated with this habitat arises from a gas they produce called hydrogen sulfide. 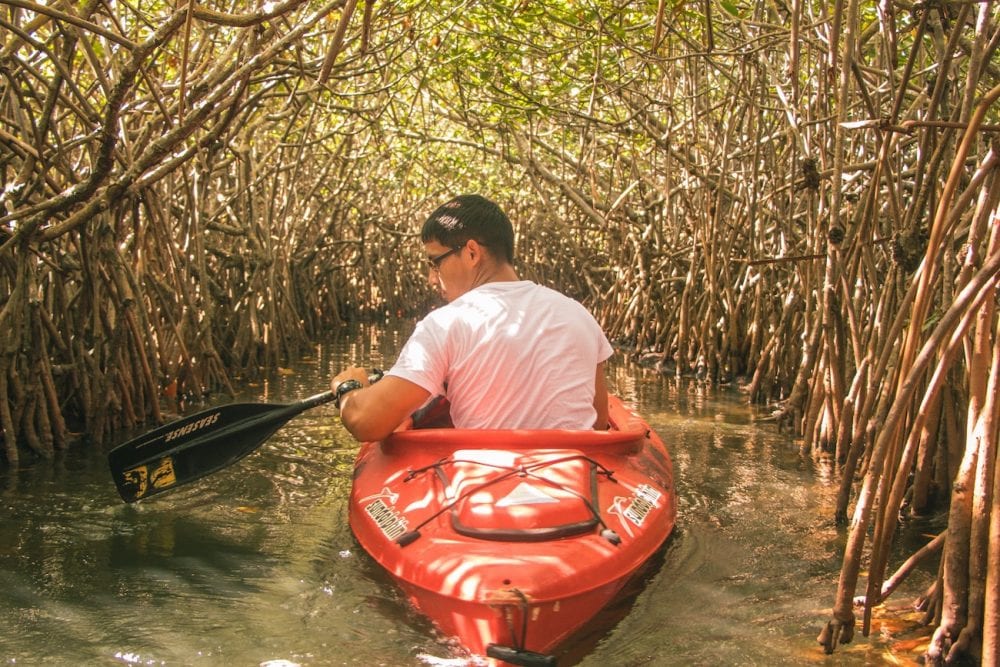 Mangroves are very sturdy and form a protective barrier between the sea and inland areas in the event of severe weather such as a hurricane. Often, they have been called “Mother Nature’s Seawall”. Another amazing fact is that, not only do they defend land, they actually help to build it. Sediment is collected among their tangled roots that can eventually form into small islets, which in turn reinforce coastlines.

Mangroves are extremely productive ecosystems.  All those nutrients and accumulated sediments in their dense root systems are exported to adjacent ecosystems. The result is an expansive web of life revolving around the tightly clumped trees.  The chain continues in that it provides an important habitat for migrating birds, as well as a nursery ground for millions of juvenile forms of marine life, all of which find shelter and food among the roots.

Mangroves are very adaptable to changing conditions along the coast of Belize.  Their roots are firmly planted in water and are a haven for tiny fish, crabs, and newly-settled lobsters. Some of these miniatures make their way to the reefs as adults as amazing Barracuda and grey Snappers.  Up above,   snails, crabs, insects, and reptiles go about their busy lives.  Reptiles and lizards move silently in search of prey. But there’s more: mangroves are also extremely important for long-legged wading birds, which not only nest in their branches, but also feed in the shallow protected waters near-shore.

Hopefully, now you will look at Mangroves in a whole new light. Unassuming as they seem, they work very hard to protect life and land.