Southern Belize may be off the radar for many, but you can’t say you’ve truly seen the country until you’ve ventured down south. Overlooking the Gulf of Honduras, a large brown pelican circles, pauses, does a swift about-turn, then swoops 20ft into the muted blue waters of the Caribbean Sea. A minute later, the same bird is perched nonchalantly on the end of the dock at Asha’s Culture Kitchen, digesting its lunch. Meanwhile, I too tuck into a fish sere and fragrantly coconut white rice. Such simple, thrilling pleasures are part of the daily diet in Punta Gorda on the southernmost edge of Belize. After all, relaxation weaves effortlessly with culture and adventure into an intoxicating love affair; I speak from personal experience—consider this my love letter to the South. If you’re in pursuit of the real Caribbean—unhurried, unpretentious, and undiluted—then look no further than Southern Belize.

Bordering Toledo to the south, Belize to the North, and Cayo to the West, the Southern district of Stann Creek beats strong with an impressive melting pot of cultures. Escape the crowds—naturally—by exploring its sugar-textured coastline and fern-lined wilderness. Especially suitable for road-trip-ready travelers, the strikingly scenic Maya Mountain mastiffs of the Hummingbird Highway wind between rows of citrus orchards and brightly-colored bags of banana plantations into Dangriga. Meanwhile, the Southern Highway stretches to Hopkins and the Placencia Peninsula to eventually lead offshore, where some of Belize’s least-visited cayes remain untouched in impressive marine reserves.

Go a little further to the southernmost district of Belize, Toledo; this magical corner is warm with hospitality and quiet escapes. Bordered by the Caribbean Sea and dotted with the most Maya villages inland, its towns are tranquil and inviting with deep fishing roots. Venture into its primary hub of Punta Gorda, or Peini, for a first-hand glance at Belizean farmers and fishers; abundant reefs and pristine islands, a mere 20-minute boat ride away, contrast bursting adventure against the deep inundations of the Maya Mountains. Instead, time seems to move at a delightfully slower place in Toledo; highways end where roads begin, and its rich, traditional Maya and Garifuna culture is as true as time.

As the reef breaks within a few feet of eyesight, Tobacco Caye is the friendly and sociable Belizean isle reminiscent of Gilligan’s Island. Just 12 miles from Dangriga, Tobacco Caye can be described as the budget destination among the central cayes in the South. Accommodations are rustic and life is simplified: the shimmering Caribbean Sea, hearty meals that fill you with Southern hospitality, and azure-tinged adventures. Amuse yourself offshore the 200-yard long and 100-yard wide isle, which hangs inside Belize’s second-largest marine reserve, South Water Caye Marine Reserve. Tried and true, there’s more than one cabaña accommodation option to choose from, including the overwater gem of Tobacco Caye Paradise. 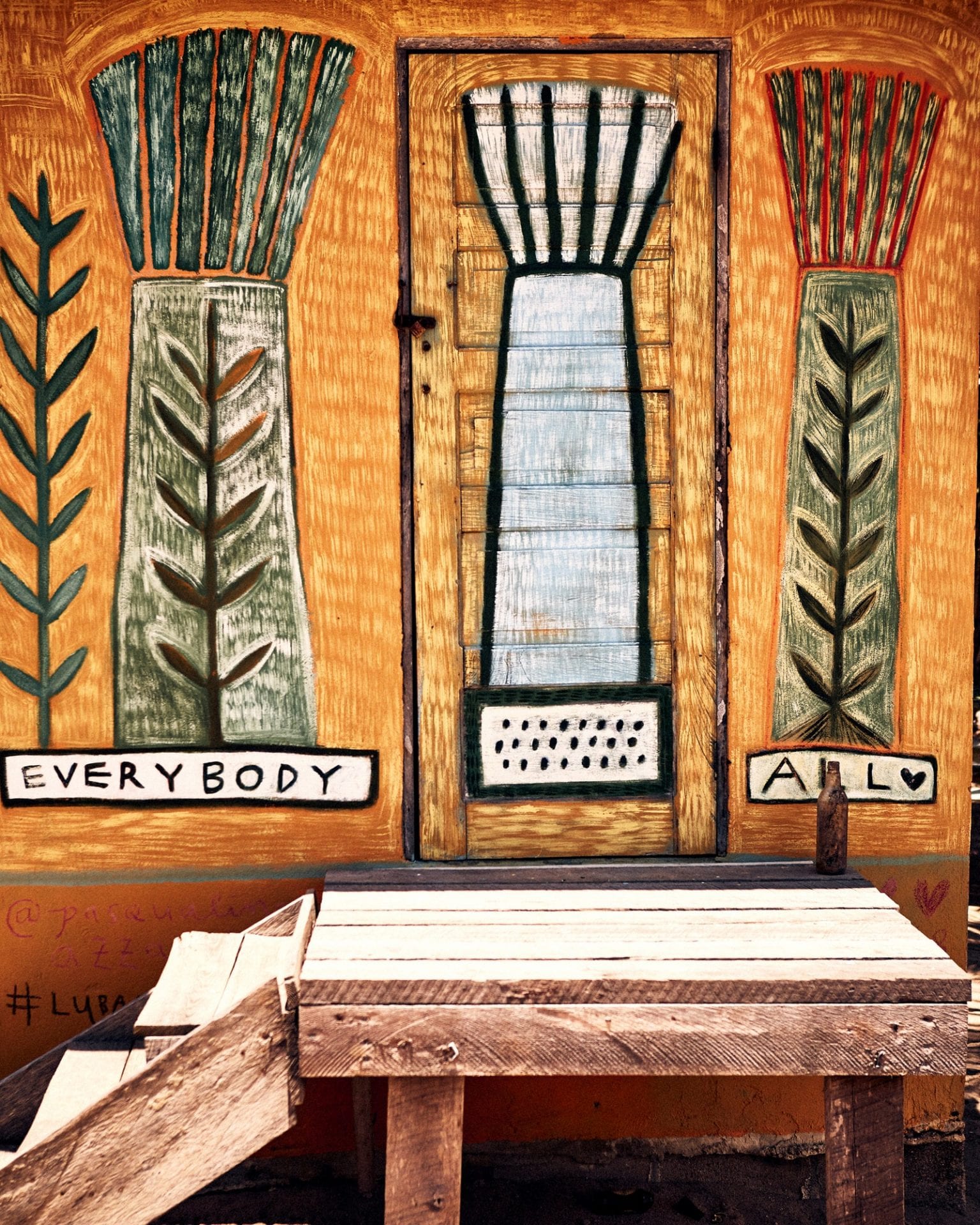 Known as the cultural capital of the country, Dangriga is a proud and festive town, making the most of its vibrant Garifuna heritage. Love culture and no crowds? Despite being the largest town in Southern Belize, Dangriga’s unpretentious coastal vibe and cultural sights are akin to the quintessentially laidback ‘Belize time’. Decorated with colorful stalls, friendly pelicans, and thatch huts, it’s no surprise that the name of this fishing community—Dangriga—loosely translates to “sweet water is close at hand” in Garifuna. Spend your days in fierce domino competitions, sampling fragrantly-fresh Creole bread, or punta-ing into dusk with perfectly pastel sunrises.

Where to stay: In town at Pelican Beach Resort or just offshore on South Water Caye at Blue Marlin Beach Resort.

Both Placencia and Hopkins Village offer up some of the longest and finest sand beaches to be found in the country. With main roads coupling pedestrians and bike paths, Hopkins Village allures with culture, food, and vacation thrills. Travelers looking to soak up sea breezes and Garifuna culture can enjoy the near five-mile-long stretch of Hopkins’ fine coastline, which shines against friendly smiles and an easy pace. Sounds of Garifuna drums become amplified under the thatch roof restaurants that line the beachfront; besides, overlooking the moonlight above the bay in the Caribbean Sea is unmatched. Venture offshore to the beckoning Belize Barrier Reef, like Glover’s Reef Atoll, or inland for a true nature experience within its verdant wilds and meandering riverscapes.

Where to stay: Hamanasi Adventure & Dive Resort or Hopkins Bay, a Muy’Ono Resort. 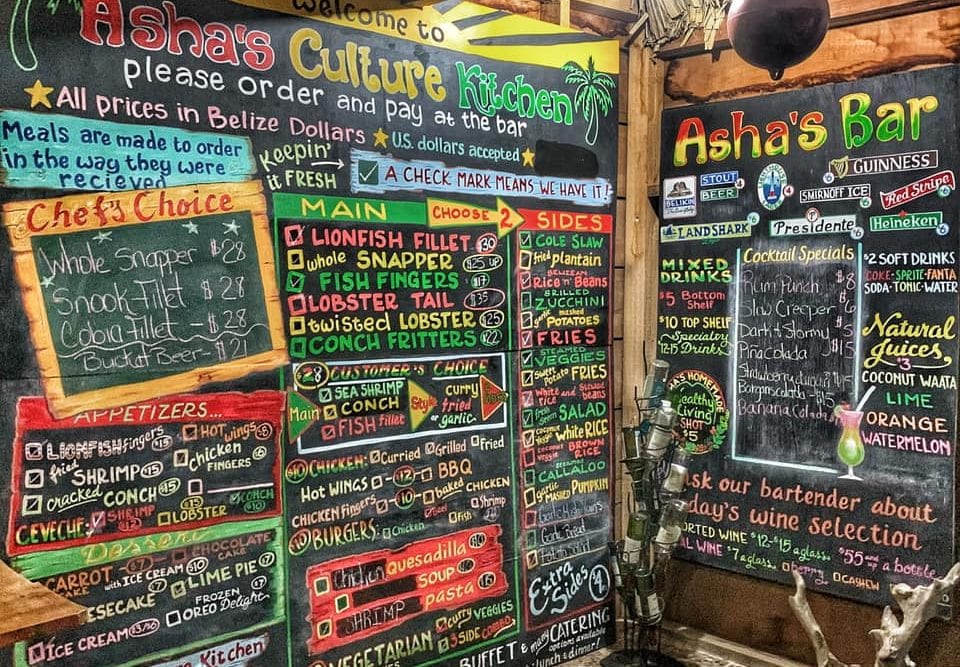 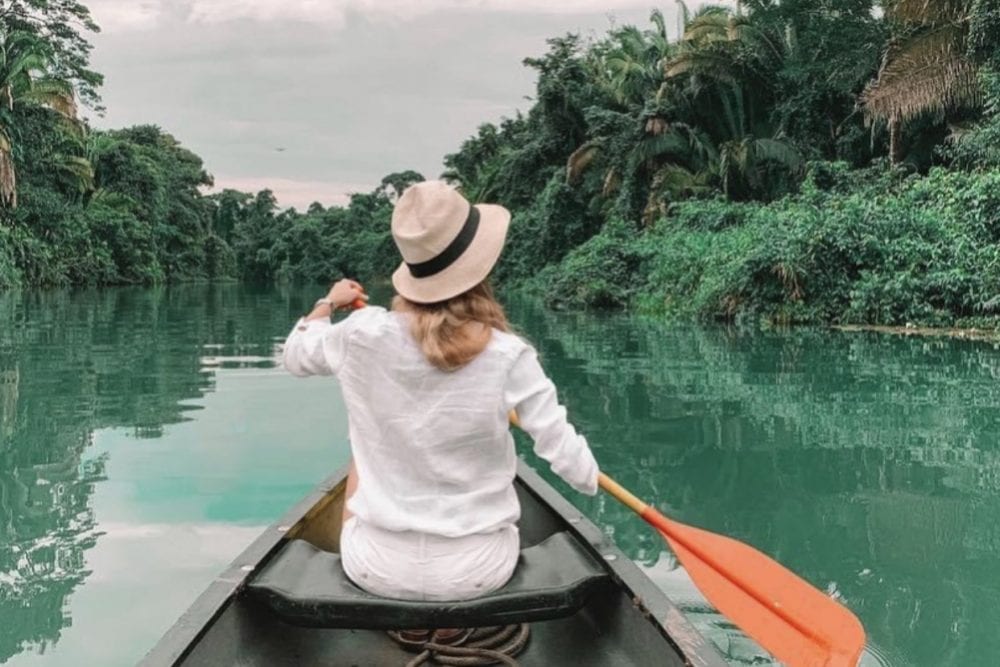 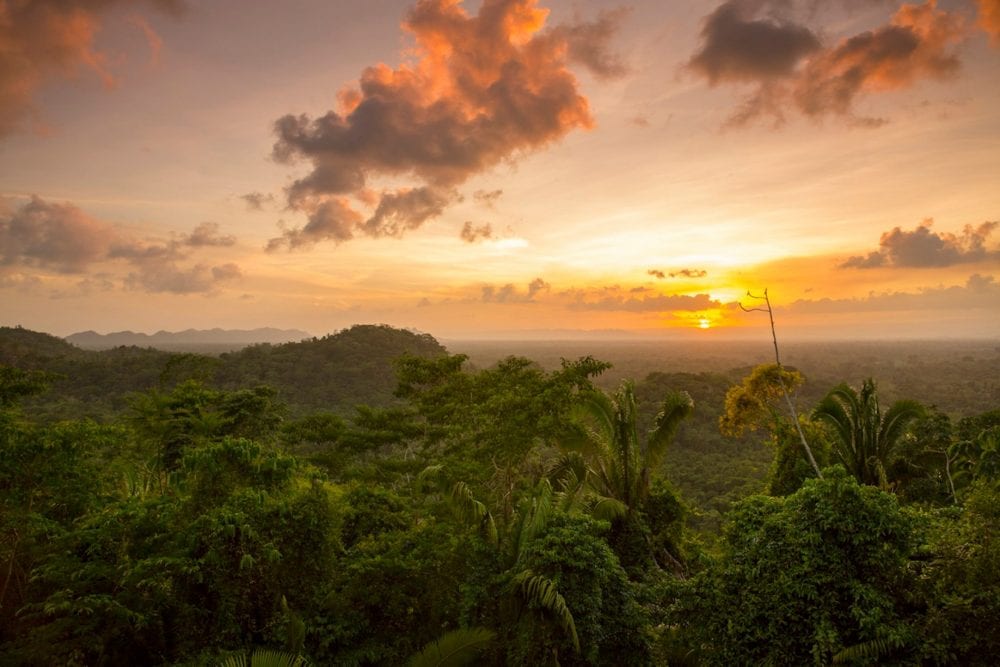 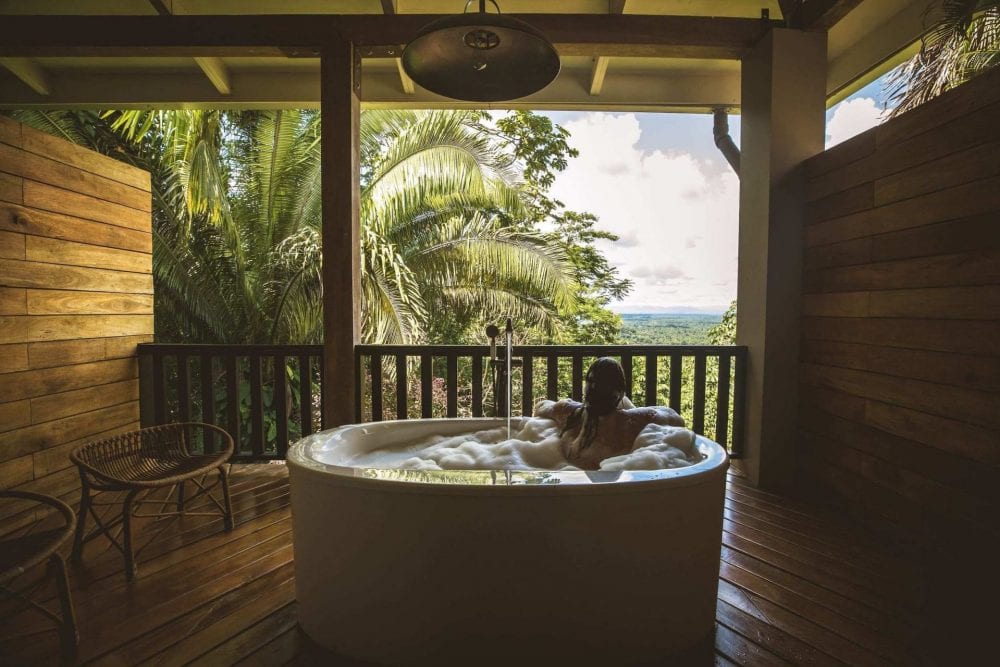 Overlooking the wilds of PG at Copal Tree Lodge.

An unassuming character coming to play, Toledo’s Punta Gorda town—endearingly abbreviated to PG—is attracting visitors big on chill. You’re in the Deep South now; the heart of the district is home to mostly Kek’chi Maya and Garifuna people just blocks from the coast. Downtown, ramshackle structures, and cement homes stretch along the Gulf of Honduras. With Guatemalan towns of Livingston and Puerto Barrios just 70 minutes by skiff, PG was once known only to travelers as a port of disembarkation. The town center is a triangular park with a distinctive blue-and-white clock tower; the airstrip is northwest, on the inland edge of town. 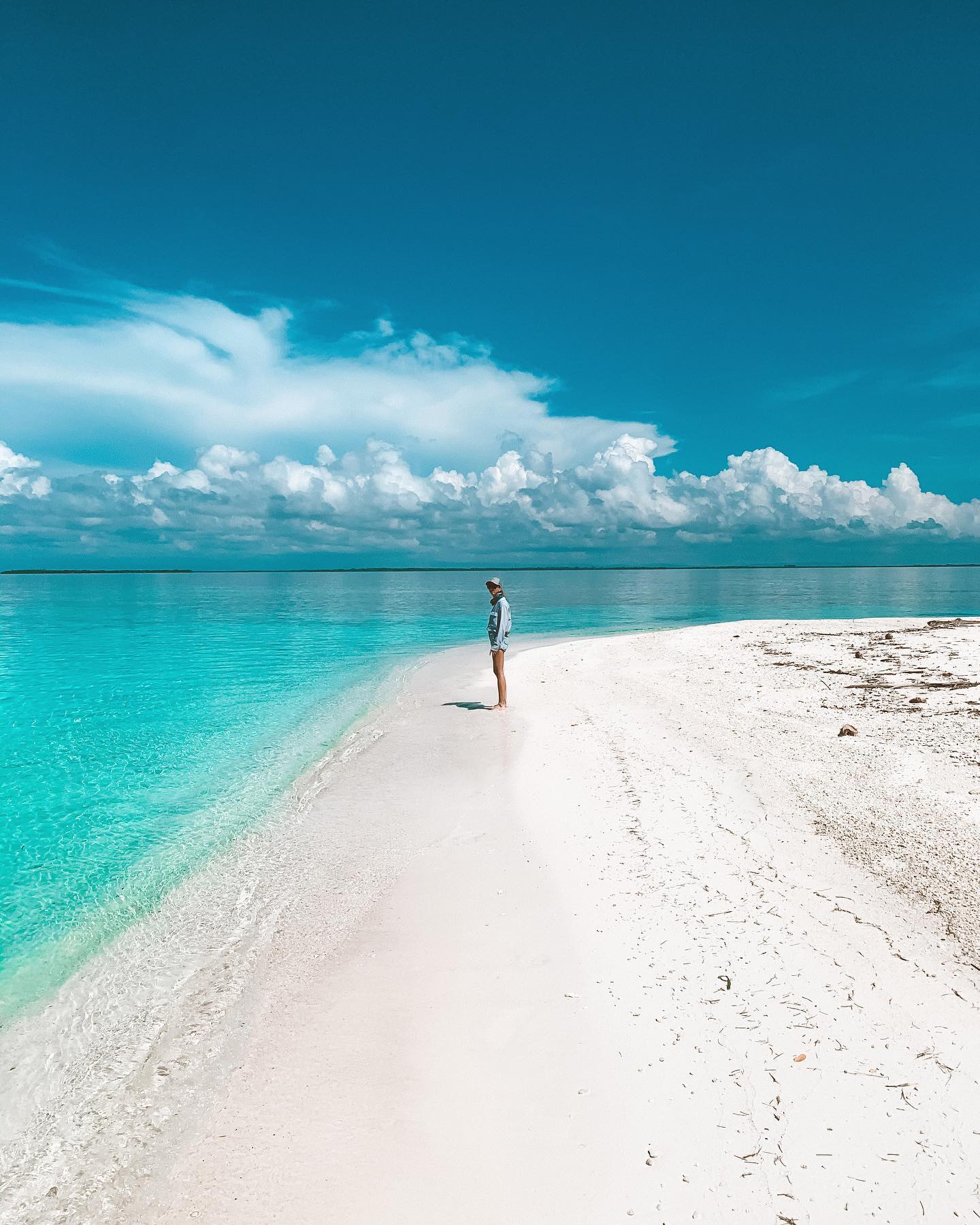 There may not be beaches like its Stann Creek counterpart, but the charm of PG runs far deeper. Seek the most picturesque (and pristine) islands in Belize by visiting the Snake Cayes or any in the Sapodilla Range. Perfection personified, the beauty of the southern isles—especially Lime Caye—instills an unparalleled dose of civic pride; Belizeans, we are truly blessed with wealth untold. Relaxation intensified, there’s a certain je ne sais quoi to the peaceful, near untouched nature of Punta Gorda that simply must be experienced for yourself.

Where to stay: Copal Tree Lodge, a Muy’Ono Resort, or The Lodge at Big Falls

Where to Go For Holidays On A...

How to Plan a Friends Vacation To...