Maya RuinsWhat to Do in Belize

Xunantunich, commonly pronounced “shoo-na-too-nitch,” is one of Belize’s most famous archaeological sites in western Belize. An interactive museum onsite allows visitors to easily learn about this proud city that once served every whim of the Maya elites. These days, visitors reach Xunantunich by ferry across the Mopan River in San Jose Succotz, Cayo District. The reward for climbing to the top of one of its many exquisite temples is a breathtaking panoramic view of the area. 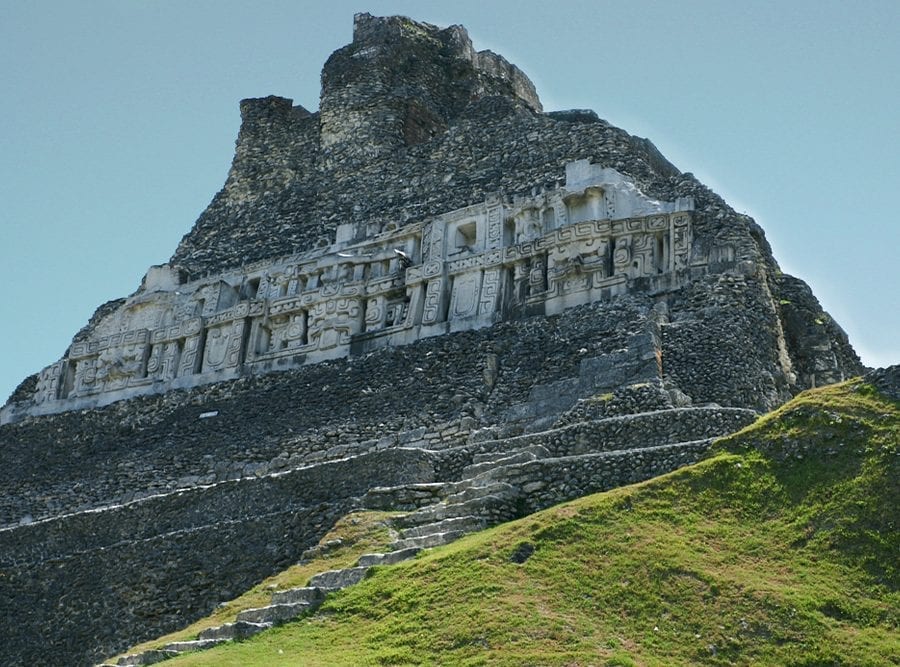 Xunantunich is close to the popular town of San Ignacio in the Cayo District and a kilometer east of the Guatemalan border. The entire site was built atop a natural ridge of limestone and was constructed to cater to every whim of the nobility. While it served as a small village between 600 and 300 BCE, it experienced a brief rise and subsequent fall between 700 and 1000 CE. This probably indicated problems within other Maya settlements between 800 and 900 CE. Likely a satellite of Naranjo in nearby Guatemala since Naranjo’s governance diminished during the same period, Xunantunich was better able to guide Maya interests.

Occupying just one square mile, Xunantunich is hardly the largest Maya site, but size is not why people flock here. What draws crowds are the unique structures that were used for residency and ceremonies by the enigmatic Maya people. After being among the first “lost” cities to be rediscovered in modern times, with the first excavation occurring in 1892, archaeological study of this site has uncovered three ceremonial plazas, homes and even a large palace festooned with friezes and masks.

Xunantunich’s most famous structure would be “El Castillo,” “The Castle,” a pyramid rising 130 feet above the main plaza. El Castillo once held the title of largest man-made structure in Belize until the discovery of Caracol’s Sky Temple. Beyond its height, El Castillo is notable for its stucco friezes. El Castillo’s eastern and western summits feature large stucco friezes with carvings of astronomical symbols, a solar deity, the moon, and Venus.

While the site’s original name has been lost to time, it is known as “Stone Lady,” taken from the English translation of its modern Mayan name of Xunantunich. This nickname arose from recurring stories of people seeing a hauntingly beautiful and immobile woman who seemed completely still and resided near a cave opening. These accounts of seeing a maiden in Maya garb, complete with “huipil” and “pik,” continue to this day and no one witnessing her has been able to enter her cave.

If you are visiting western Belize on your vacation, make sure to add a tour of Xunantunich Maya Ruins to your itinerary.