In the latter part of the 1800’s Belize (British Honduras) was known as a haven for colonizers, buccaneers, and other settlers looking for freedom and a better quality of life.  For some reason, however, it is a little-known fact that, following the Civil War of the States between North and South, ex-Confederates from the states of Louisiana and Mississippi were also drawn to our shores.

At the same time, the abolition of slavery, the emergence of free trade and declining mahogany prices, devastated the colonies of the region. In response to economic decline in the Caribbean, the British reorganized and consolidated their efforts in the Caribbean in order to reduce overall operating expenses. As a result, British Honduras was now administered by a lieutenant governor who was subordinate to the governor of Jamaica. Citizens of British Honduras, realizing the need for economic revitalization, observed the events in the United States immediately following the Civil War (1860 to1865) with considerable interest.  Most believed that an influx of ex-Confederates to the colony would save them from economic ruin and, if numbers were great, set a course toward self-government.

Lieutenant governor John Austin and several wealthy landowners spoke to the U.S. consular agent concerning such prospects once it appeared the Confederacy was lost.  Emigrants knowledgeable in planting cotton, sugar, and tobacco were most desired by the colonial establishment.  Their hope was that the large tracts of cutover mahogany lands throughout the colony might be transformed by educated and industrious people into profitable plantations. However, there were two vital factors that would prove to separate the desire for immigrants and the reality of making it work: transportation barriers and exorbitant land prices.  Roads were nonexistent and rapid growth of underbrush made all road building difficult and expensive.

Travel overland by horse or wagon was tedious, and water transportation was dependent on weather conditions. Besides, transportation to the colony itself became a deterrent as there was no regular steamship service between Belize City and the United States. 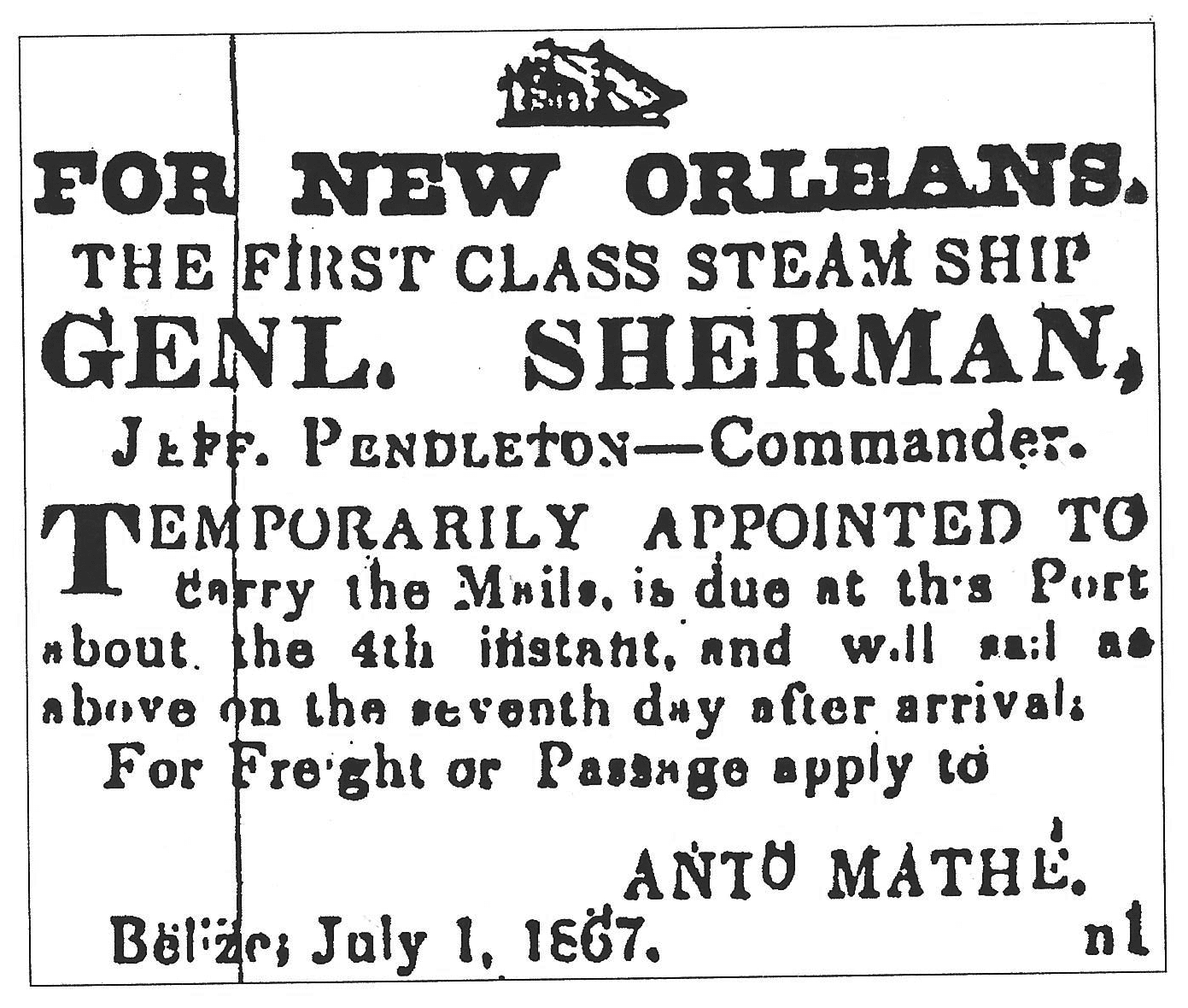 In 1866 one contingent arrived on the extract and sought temporary accommodation in Belize city until they could procure land in the interior.  Taverns, shops, and demand for accommodation soon turned a sleepy port into a boomtown. Messrs. Putnam and Cary, known as Forwarding Merchants established themselves as real estate and procurement agents.

For a while, it seemed that settlements in Toledo would be successful under two Mississippi gentlemen, Mr. Hatch and Mr. Pearce, but it was short-lived. They became discouraged as the climate was not right for growing cotton. They tried other crops but eventually, could not adapt to the sandflies, the homesickness and pervasive stomach issues all took a terrible toll, and they and there was a mass exodus back to the U.S. 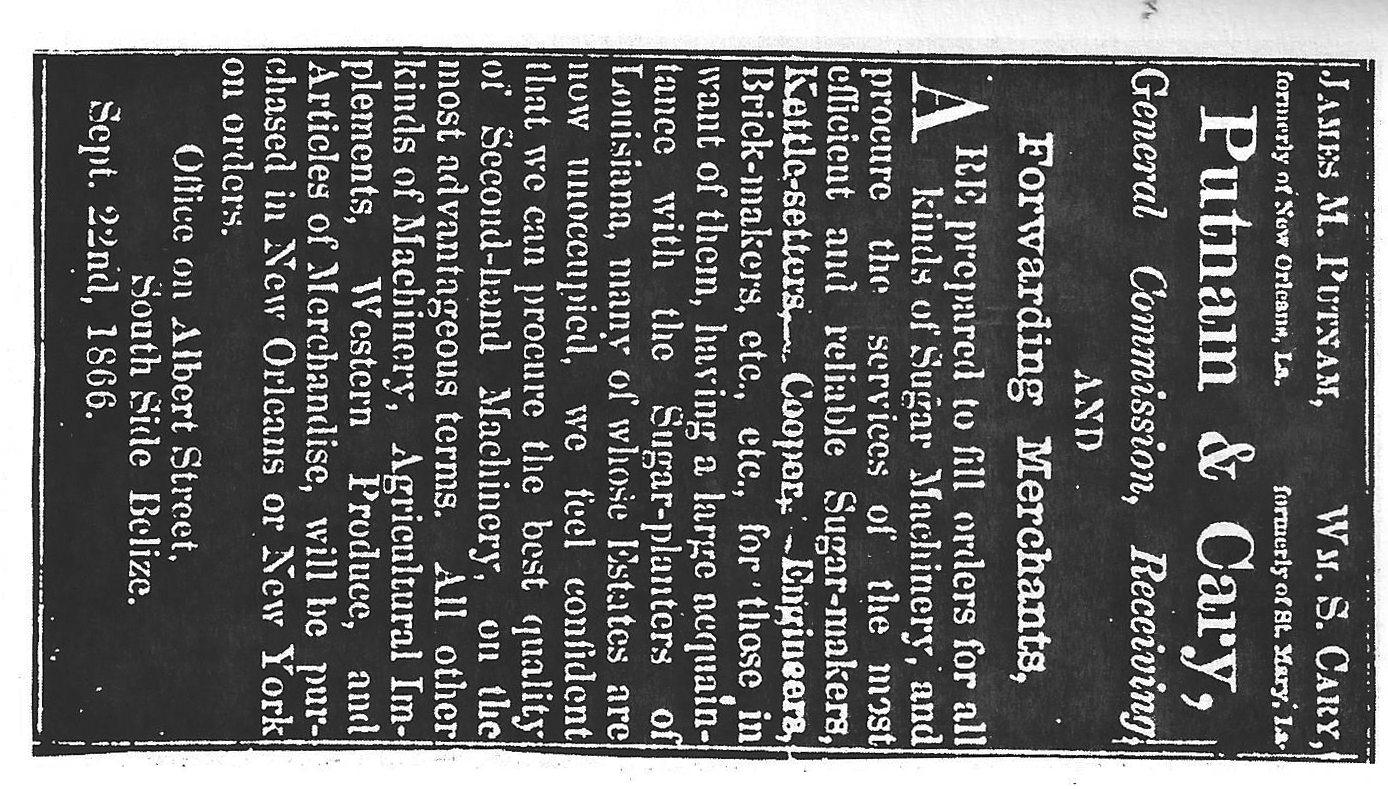 In the northern region of the country, settlers faced a different environment than did their counterparts settling farther south. Here they had to contend with being invaded and terrorized by the Icaiche Indians from Mexico along the colony’s northern border. Those who settled on Corozal soon left.

The most successful were a few who settled along the New River, namely, John Wallace Price of Algiers, Louisiana, along with E. Boudreau, H.J. Archer Kevlin, Doyle, and Doughty purchased large tracts of land for the planting of sugarcane.  The New Era, in 1871 stated that Price was successful in producing at least two tons of sugar per acre for the past season.  While Price’s success in agricultural pursuits is worth noting, it was his fighting ability which brought him lasting fame. Price had considerable experience in the art of modern war.  He had served in a Louisiana artillery company and in the Confederate Medical Department during the Civil War.

Avoiding capture until the very end, he was taken prisoner on the final month of the conflict. Following his parole, he immediately embarked for British Honduras where he purchased what was to become Louisiana Farm at Tower Hill.  Later, he organized a strategy to drive out the Icaiche Invaders and secure a peace.  In 1868, during a cholera outbreak, he donated land to establish an area for quarantine.  He married a young Yucatecan woman and was vital to the further development of the sugar industry.