The Actun Tunichil Muknal Cave, aka ATM Cave, should be on your Belize adventure bucket list! With archeological sites officially reopening in Belize, learn more about the history of ATM cave, just in time to explore. Located in the western part of Belize, its exploration combines adventure with archaeology. You’ll feel like you’re Indiana Jones or the Tomb Raider as you delve into its mysteries. First, you must drive 45 minutes from San Ignacio, then trek 45-minutes through the jungle. Finally, you’ll swim to reach the cave. Once inside, you will need to swim through some sections and remove your shoes in others. Yet visitors who’ve toured the site say it’s more than worth this effort.

Cave of the Stone Sepulcher

Interestingly, Actun Tunichil Muknal is one of the most artifact-rich caves ever found in Belize. Also known as the Cave of the Stone Sepulcher, it was a sacred space to the ancient Maya, where they worshipped their gods and performed human sacrifices to appease them. Archeologists have found items dating back to 250 AD. This is when the Maya first started to explore the cave. However, it was not until about 700 AD that they began to perform religious ceremonies. To find appropriate sites, they went deeper into the 3-mile long cavern system.

Because of the centuries of Maya exploration and use, there are numerous artifacts within Actun Tunichil Muknal. Currently, over 1,400 relics have been found and cataloged. These include ceramic pottery and water vessels as well as tools and weapons. The latest of these dates to 909 AD, at which point the cave was abandoned. However, it wasn’t until 1989 that the site was rediscovered by Dr. Jamie Awe and his Western Belize Regional Cave Project. They explored the cave and conducted archaeological research. Among their finds was a pot adorned with a monkey near its rim. Not to mention, there are only four like it in the entire Central American region! 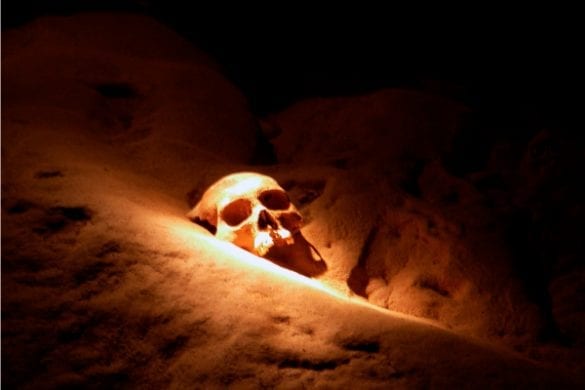 Then, there are the more gruesome finds.

The Maya believed that their gods of rain and agricultural fertility needed to be appeased with human flesh during times of strife. Since these gods were thought to live in the underworld, caves were seen as a gateway to the afterlife. In some cases, it was sufficient for a priest or noble person to offer blood. In the “Stelae Chamber” are two slate alters called stelae set up for this purpose. But in other parts of Actun Tunichil Muknal lies the remains of bound and tortured sacrificial victims. Half of the 14 complete skeletons belonged to children, as the Maya believed that pure victims were most pleasing to their gods.

The most famous of the skeletons in the “Crystal Maiden” whose remains are now coated with crystalline brown calcite that sparkles. With all of these unique wonders, it’s no surprise that the Actun Tunichil Muknal Cave has been the subject of documentaries by the History, Discovery and National Geographic channels since it was rediscovered. The National Geographic Society rated ATM cave as one of the Top Ten Caves in the World. Since its 1998 opening, people have flocked from all over the world ever since. Given the ATM Cave’s fascinating history and cultural significance, you can see why this is a place that should be on your own list of must-see sites while you are in Belize!