All About The Belizean Artist Carolyn Carr

Carolyn Rauch was born in Colorado in the summer of 1944, grew up on a farm in Western Kentucky, and married John Carr in 1968.  She holds a BFA in Design from Utah State University, as well as a Bachelor of Fine Arts.  In 1973, the Carrs bought the Banana Bank property in the Cayo District and finally moved to Belize in 1977, to what is now their home. Mrs. Carr holds a Bachelor of Fine Arts Degree in Design from Utah State University.  Her paintings bear her unique touch, and you surely have seen them everywhere in Belize. 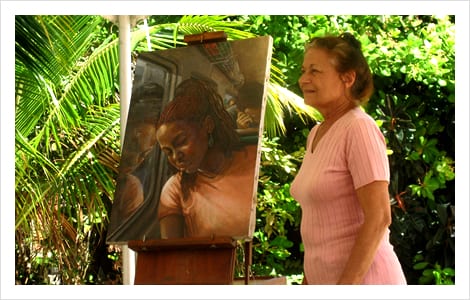 Carolyn Carr has a purpose in creating her portraits of Belizean culture.  Having grown up on a farm, as a child, she witnessed first-hand her parents’ struggle to harness, as well as overcome, the forces of nature.  Forces such as drought, hail, and wind had to be dealt with in order to build and sustain their farm.  These are some of the same obstacles to be overcome in a tropical jungle setting.  What the artist strives to create through her portraits of life, is a space in which she can define, explore and try to understand the inherent problems and seek a solution to manage whatever presents itself. To Mrs. Carr, the canvas is a safe haven, a place where she can lock in cause and effect.

When Carolyn first moved to Banana Bank, she had an experience that reinforced her philosophy.  She had rescued a small creature, not quite realizing what it was.  The little ball of fuzz turned out to be a rat falcon, and as it emerged, she set it free, only to see it swoop down to devour a beautiful Blue Morpho.  Although she didn’t see the outcome, the incident served to reinforce the sense of vulnerability and struggle that is the reality of Nature in all its forms.   Imagine the courage and pioneering spirit it took to go from a life in the expansive skies of the American Prairie, to become ensconced in the dense jungle of Belize.

Carolyn Carr’s paintings are intensely moving and very evocative of Belize. Their range is staggering, using mainly classic watercolor techniques.  One feels drawn in, not only because of the intense riot of color but also because of the experience of the senses, smelling sensing. Feeling. More than any written essay, her paintings reflect an intense understanding of and an almost tender respect for her subjects. Her cattle grazing, are at once majestic and languid. Her Garifuna women are proud and imposing as they sell their wares at the market or dominate their household with a baby slung on her hip. Fish vendors come alive in their white “vests” (undershirts) scaling and cleaning fish at the old market with their sailing sloops on the river.

Mestizo and Maya women in their embroidered “huipiles,” come to life in their colorful simplicity.  Her Street scenes of Belize City, depict the dusty streets, bustling activity, and remnants of dilapidated buildings, mules and carts, and the iconic swing bridge.

We should be proud and grateful to our adopted Belizean sister Carolyn Carr who captures, without words, the essence of our beautiful country and its people through her art. Her work has now become an iconic aspect of Belizean culture.

Visit the Modern Maya of Belize

One Climate, One Caribbean Music Video released by...