Savannahs are described as grasslands with open stands, scattered clumps or individual trees, usually growing on acidic sandy soil of poor fertility, Soil drainage is poor, which causes standing water in the wet season, and cracked dry hardpan in the dry. There are no forest canopies, and vegetation is usually open; conditions are harsh, and food is not abundant. The ecosystem is simple, not rich and complex. It is nevertheless part of a vital chain.

In Belize, there are two major types of savannah, separated by elevation. These are the Mountain Pine Ridge (an upland savannah) and Coastal Savannah (a group of lowland savannahs).  The Mountain Pine Ridge system occurs on an elevated plateau, between 2000 to 3000 feet. The soils are layered granite topped by limestone.  Nature uplifted the plateau and the limestone became eroded. What used to be broadleaf forest is now mostly pine.  Rainfall is about 74 inches per year. 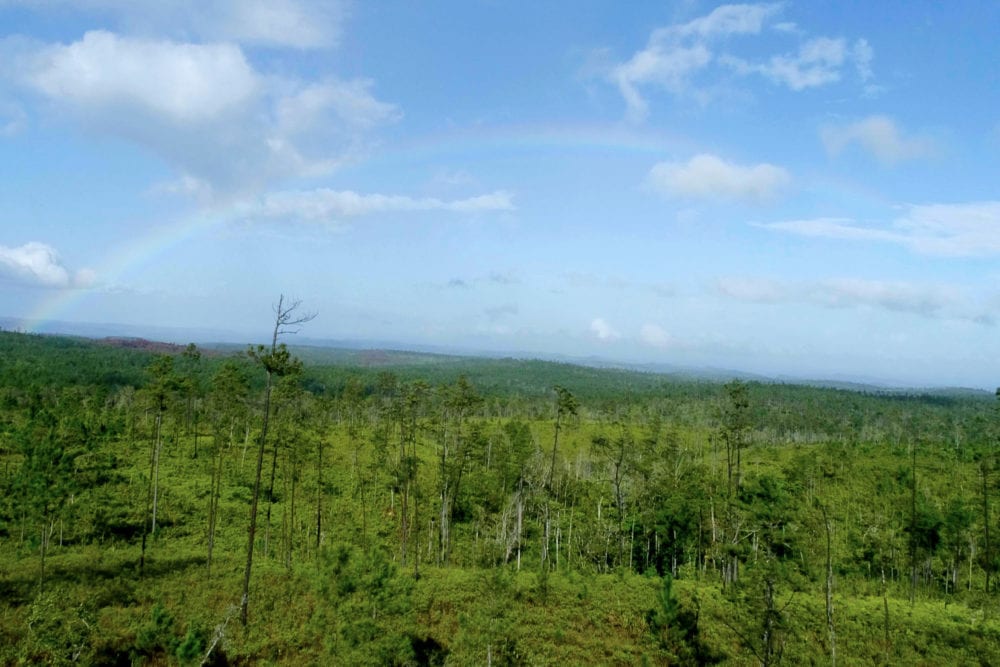 Lowland savannahs are divided yet again into two major types, based on how they were built.  In the north, the topography is constructed of old eroded limestone on flat land featuring poor drainage. Soils vary—sandy topsoils overlying compact clay or limestone.  These types of savannahs are found from Gales Point northward. In the south soil is composed of nutrient-poor acidic quartz and deposited by rivers from the mountains and are found in the coastal lowlands of Toledo and Stann Creek. Here rainfall is variable.

The principal function of savannahs is that they absorb greenhouse gases. Additionally, species lying close to the ground are capable of survival under vast seasonal sheets of rainwater.  The pine trees in savannah ecosystems also serve a purpose: they are an important windbreak, and their roots are like claws that hold on to the soil.  While biodiversity is lower, the savannah is still home to a wide variety of flora and fauna, and also serves as a passageway for other species moving between areas of Broadleaf forest.

Life is tough in savannah ecosystems, and something extraordinary takes place.  Since they depend on fire for renewal, pine trees, their dominant species are rich in highly-flammable pitch or resins. These attract lightning, which starts equally-flammable grass burning.  This may seem like a disaster, but it isn’t.  Although the fire may spread considerable distances and consume considerable amounts of wildlife, brush and young trees, this stimulates pine– cones to open. In turn, this releases the seeds of a new generation of trees.  It also serves to clear the underbrush for the next generation of trees.  Not only do the pine trees survive fire, but they adapt well to the waterlogged conditions of the rainy season.  Flora and fauna too, must adapt and survive.

Mother Nature is wise, and this magical system is especially noteworthy now, at a time when climate change and its solutions are at the forefront of environmental concern.

Belize as a Caribbean Country