Aesthetics aside, Belize stands out in another important respect: food. After all, the Creole diet can be as diverse as their genealogy. Breakfast is usually Johnny cakes or the always-lovable fry jacks. Rice and beans are virtually a daily occurrence (enjoyed by everyone, not just Creoles) alongside some kind of meat, like stewed chicken, fried fish, or even game meat, like peccary, deer, or gibnut. That’s almost always accompanied by fried, perfectly-caramelized fried ripe plantain; add in potato salad, and it’s a foolproof Sunday Dinner. But there’s a special place in the average Belizean’s diet for baked goods, specifically: Johnny Cakes, Powder Buns, Creole Bread, and Creole Bun. And now, you can learn how to make all four. 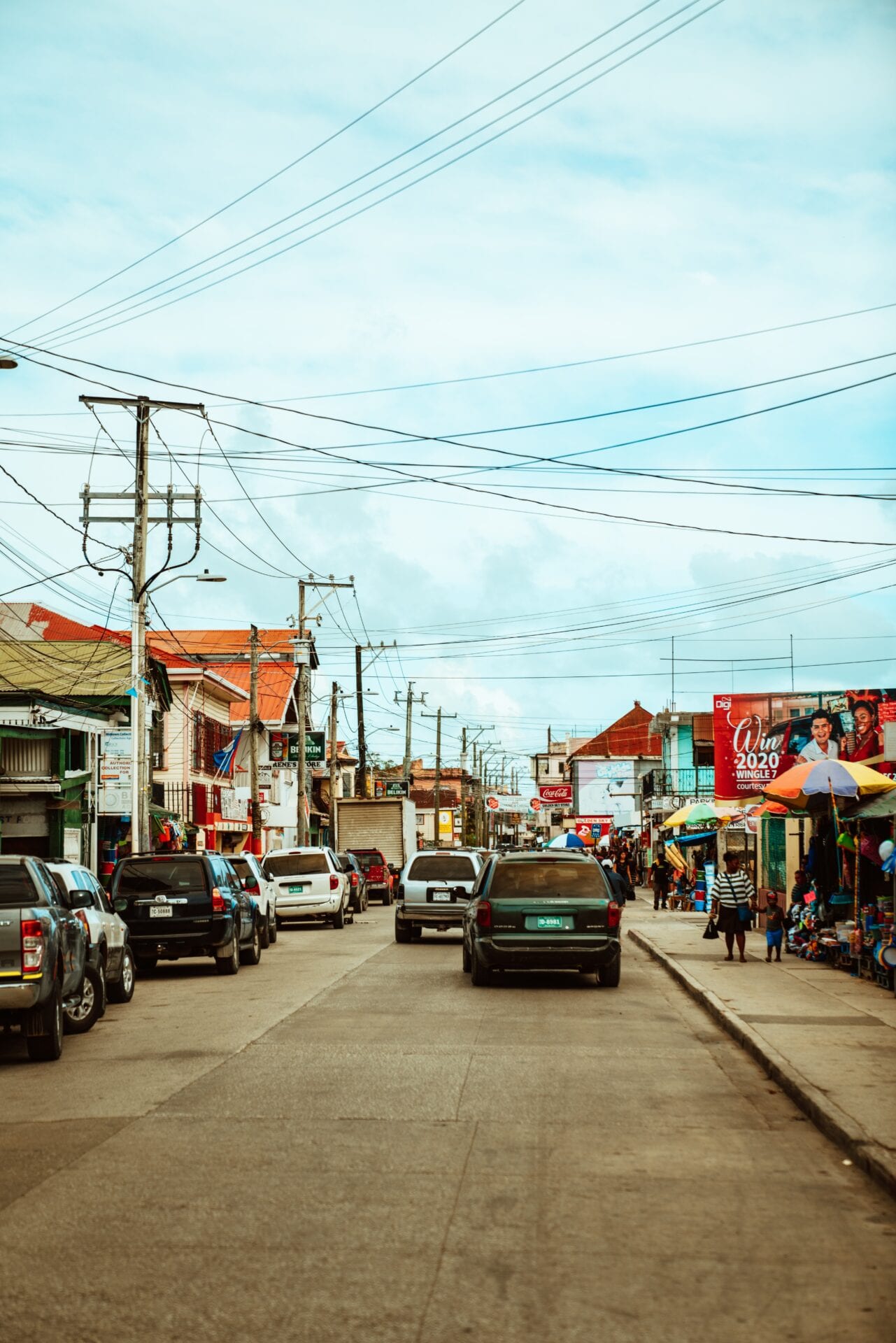 Photo by Meritt Thomas on Unsplash

By 5 pm—at least in Belize City—corners of the neighborhoods are kept company by makeshift street-food stalls, thanks to (talented) home bakers. Still, warm baked goods are stacked tall in Belize, slightly steaming the walls of clear plastic containers they’re housed in, which rest heavily atop white plastic 4×4 folding tables. One of each, and a brown paper bag suddenly becomes laden with fragrantly-spiced Creole Bun bread, powder buns still crisp from the oven, buttery-rich Johnny cakes, and soft Creole bread. So soft, the Creole bread is still indented with the outline of a thumb from the quick grab—separated only by a thin napkin. Can’t make it to one of these corners in Belize? Try your hand at some of the best Belizean baked goods with the following recipes below, including Creole Bread, Powder Buns, Creole Bun, and Johnny Cakes. 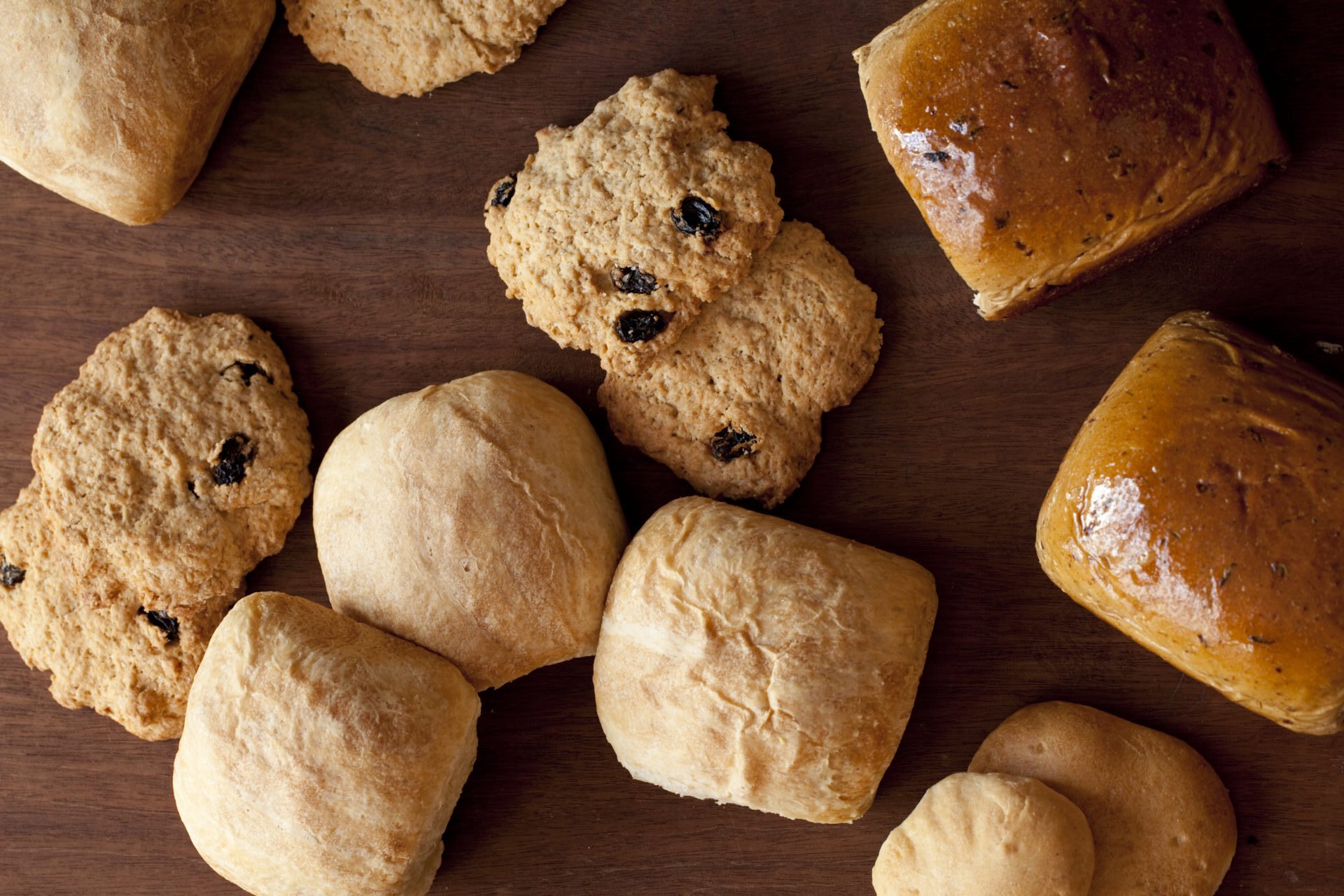 Pulling on Caribbean roots, Creole Bread would just be yet another plain white bread if it weren’t for the addition of fragrant, full-fat coconut milk. Lending to its richness and fat content without weighing down its crumb, Creole Bread is easy to eat still warm from the oven with absolutely nothing on it, with a pat of butter, or my favorite: with a healthy swipe of homemade Guava Jelly from Placencia Village. Pro tip: do as Belizeans do and slice this delicacy down vertically—not across.

Preheat oven to 400° Fahrenheit. Mix all ingredients and knead for about 8 to 10 minutes. Roll into a ball and place in a greased bowl to rise for 1 hour. Remove and knead for about 1 minute. Divide into 6 pieces and shape into rounds. Place on a well-greased baking sheet and flatten slightly. Bake for 25 to 30 minutes or until golden brown. Makes six (6) of 6″ round bread.

Again, because the Creole refers to a mixed-blood descendant of English log caters and African slaves from Jamaica brought to harvest Mahogany trees, the British domain still rules over Belizean cuisine even today. Afternoon tea is popular, with many paying homages to the British tradition—sometimes with the accompaniment of Powder Buns. They’re a cross between a biscuit and a British scone, with a fairly large crumb and crunchy exterior. And don’t get me wrong, they’re timidly sweet enough that having two for breakfast with coffee won’t land you any judge-y looks.

Preheat oven to 350° Fahrenheit. Sift flour and baking powder. Add sugar and nutmeg. Cut shortening into the flour mixture. Combine milk and vanilla, then fold into dry ingredients along with raisins. Roll into equal size balls and slightly flatten on a greased baking tray. Bake 15 to 20 minutes or until golden brown. Makes approximately 12.

Everyone in Belize has their own slight variation of the Creole bun, spiced to family preference. It’s a soft yet dense bun, glazed thick with a sweet, sticky brown sugar simple syrup. It’s delicate in texture, with warm whispers of cinnamon and allspice. The aromas are so thick and palpable, that even the air is tempting. Rich with coconut milk, raisins dot its interiors, but that’s entirely up to you too.

Preheat oven to 350° Fahrenheit. In a bowl, stir all dry ingredients until well combined, including yeast. Add the softened butter and using your hands or a pastry cutter, mix with dry ingredients until the butter pieces are pea-sized and the texture resembles wet sand. In a separate bowl, beat the eggs, vanilla, and half of the warmed coconut milk until well incorporated. Reserve the remaining half of the warmed coconut milk on the side. Add the wet ingredients to the dry and mix well, until the flour is combined. Add the remaining wet ingredients, little by little, until the dough is homogenous, without sticking to your hands or the bowl. If kneading by hand, the dough should come together in about 5 minutes as smooth, glossy, and slightly elastic. Here, add the raisins and knead just until they are well distributed.

Oil the dough slightly with a neutral-flavored oil and let rest; the oil is done to prevent a dry ‘crust’. Cover with plastic wrap, or a kitchen towel, and place in a warm place for 2 hours, or when doubled in size. After, roll the dough into a log and cut it into 12 even-sized portions. Place on a lined or greased baking pan about 2 inches apart. Cover with a kitchen towel and leave in a warm place until doubled in size, about 1 hour. Once removed, brush warm buns liberally with a brown sugar simple syrup glaze and serve. Enjoy sliced with butter, cheese, or on its own. 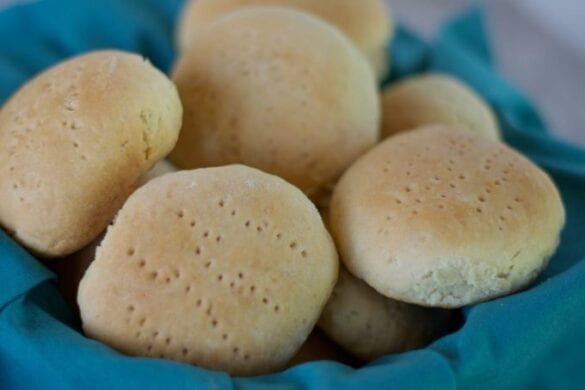 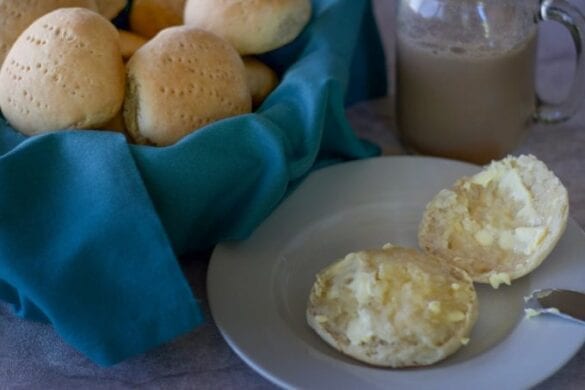 As English muffins are to the English, Johnny cakes are to Belizeans. Johnny Cakes are an essential quick breakfast bread, and they serve as the foundation of what’s arguably the easiest road-friendly meal in the mornings, filled with ham, beans, a fried egg, stewed chicken or cheese—or a combination of two or more. That’s where the name originated after all: made for a journey. They’re hearty and quick to bake, thanks to the presence of baking powder and not yeast, which means there’s no waiting time for them to rise. Unlike the Caribbean counterparts that tend to fry journey cakes, Belizeans will form the dough into balls, flatten it slightly with the back of a fork for its unmistakable textured top, and bake until golden overall.

Coconut milk—or even coconut milk powder—makes these meals in and of themselves slightly indulgent, enriching ribbons of dough inside its crispy exterior. They’re slightly sweet from the coconut milk, yet neutral enough to be enjoyed savory, and the perfect canvas for a slather of butter, jam, or honey.

Find the Flavors of Belize recipe for Johnny Cakes HERE.

Eight Beautiful Birds in Belize To Spot on Your Belize Vacation

5 Things To Do In Northern Ambergris...