Regionally, things are looking up for vaccine rollout programs in the Caribbean—a welcomed comfort for a region dependent on its North American neighbors and visitors. Pre-pandemic, recent calculations by the World Travel Tourism Council placed the Caribbean as the world’s most tourism-reliant region, with crippling economic ripples as the hospitality industry shuttered under closed borders and stay-at-home orders. Made up of dozens of sovereign nations, territories and dependencies that often reacted disparately to the virus, the region was struck unequally by the coronavirus too. Some islands were walloped by staggering caseloads, while infections on others dwindled to single digits.

Recent statistics from PAHO show more than 153.5 million people have been immunized in the Americas, but only 21.6% of these are in Latin America and the Caribbean. Unequally, some—like Turks & Caicos with nearly 60% of adults vaccinated—race ahead to herd immunity while others—like the twin island state of Trinidad & Tobago, currently under a State of Emergency—face a deadly third wave of COVID-19 infections. Now, Jamaica is set to begin receiving approximately 1.5 million doses of the Johnson and Johnson COVID-19 vaccine in August 2021, as confirmed by Chairman of the National Health Fund.

Jamaica received another batch of COVID-19 vaccine manufactured by AstraZeneca. 55,200 doses of the COVID-19 Vaccine arrived in the island yesterday afternoon at the Norman Manley International Airport in Kingston. This batch represents another allocation from the COVAX Facility. pic.twitter.com/ubUaTEZpXH

As of May 28, approximately 155,683 Jamaicans have received the first dose of the COVID-19 Vaccine, representing 8% of the target population (1,924,759) while 22, 206 persons have received their second dose. In addition to the timeline, the Chairman of the National Health Fund was hopeful that the Johnson and Johnson vaccine will arrive in Jamaica at the stipulated time, as the doses were requested on a contractual basis. Jamaica was the first Caribbean country to receive vaccines via COVAX in March 2021. 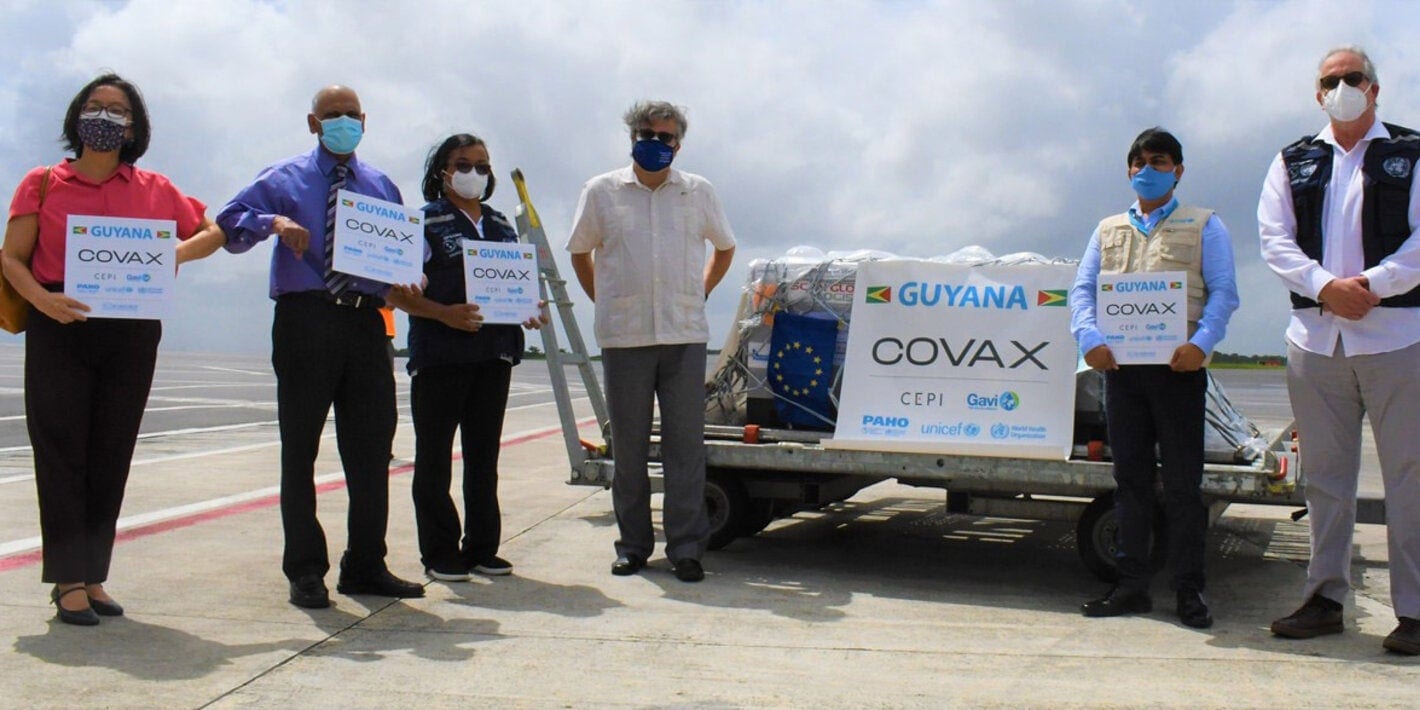 The African Union has allocated 1.5 million doses of the Johnson & Johnson vaccine to the Caribbean Community (CARICOM), Guyana’s Health Minister Dr. Frank Anthony announced on Monday. Speaking in a radio interview, Anthony said that Guyana is expected to receive 150,000 doses of the Johnson & Johnson vaccine by mid-June. Guyana has since made a down payment on its allocation for the J&J Janssen vaccine, the one-shot dose named as 85 percent effective against severe illness from COVID-19, according to the British regulator.

The health minister said that the vaccines will be rolled out as part of the government’s nationwide vaccination drive and that communities in the outlying regions that are difficult to reach will be targeted with the Johnson and Johnson one-shot vaccine. More than 198,000 people have received a first shot of one of the COVID-19 vaccines and more than 60,000 persons have received both shots. 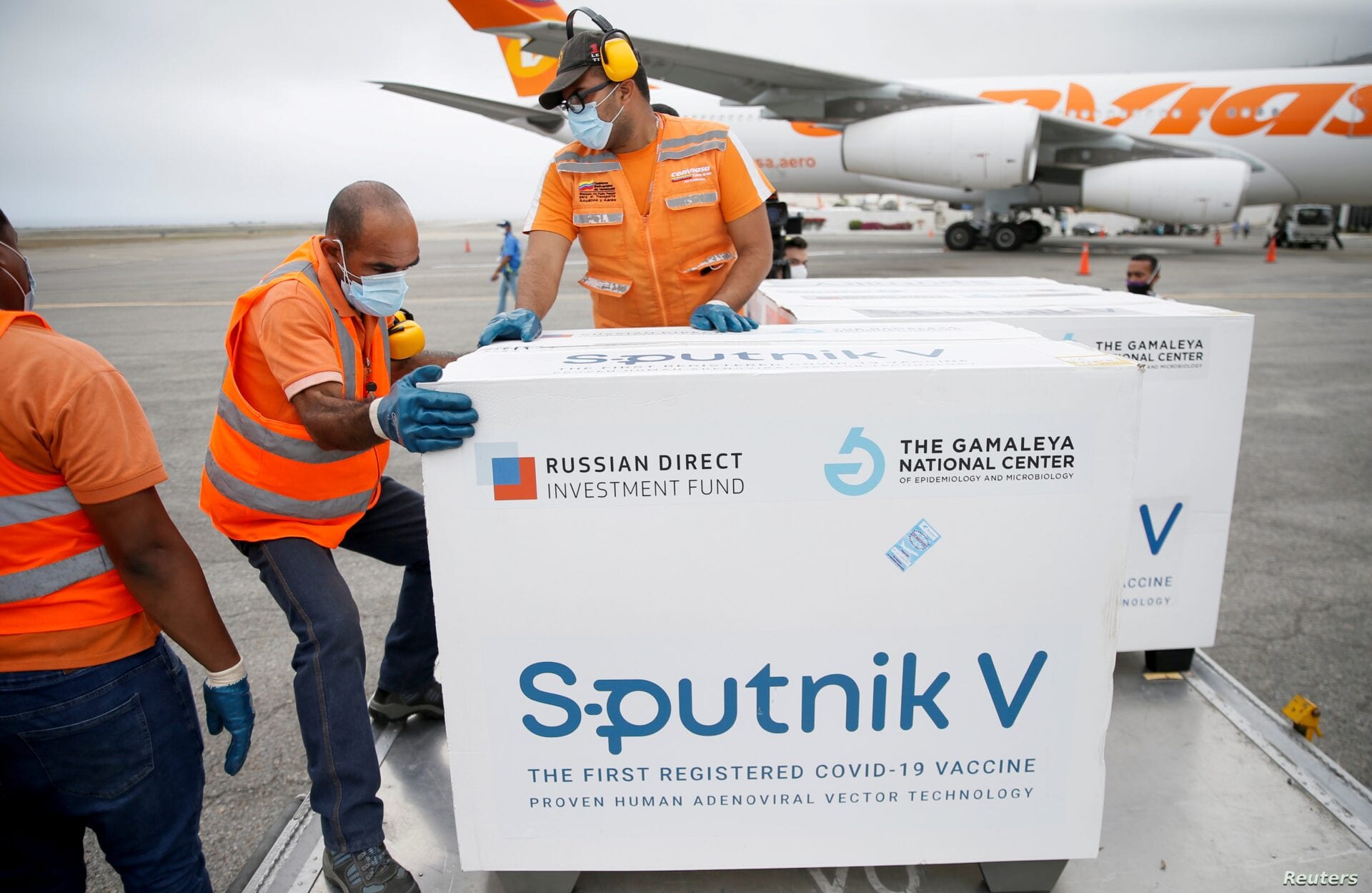 FILE – Workers take care of the shipment of Russia’s Sputnik V vaccine at the airport in Caracas, Venezuela, March 29, 2021. Image via Reuters

Anthony said the second dose of the Russian-made Sputnik vaccine will arrive this week to continue the immunization of persons who have already received a first shot; there are enough vaccines to provide every adult as coverage of 400,000 persons with Sputnik V shots were ordered. Meanwhile, Anthony said those who have received a first shot of the Astrazeneca vaccine can access their second shot once it has been four weeks since that first shot.