Beautiful Belize boasts astonishing biodiversity, varying landscape, an array of curious cultural cuisines, and an assortment of different people with proud history and traditions.  In November we celebrate one such category of people, the eminent and ardent Garifuna.  According to folklore, the Garifuna people landed upon Belizean shores on November 19th, 1802 so we mark this important day in our country’s illustrious history as a national holiday but celebrations continue throughout the entire month.

A look back in time 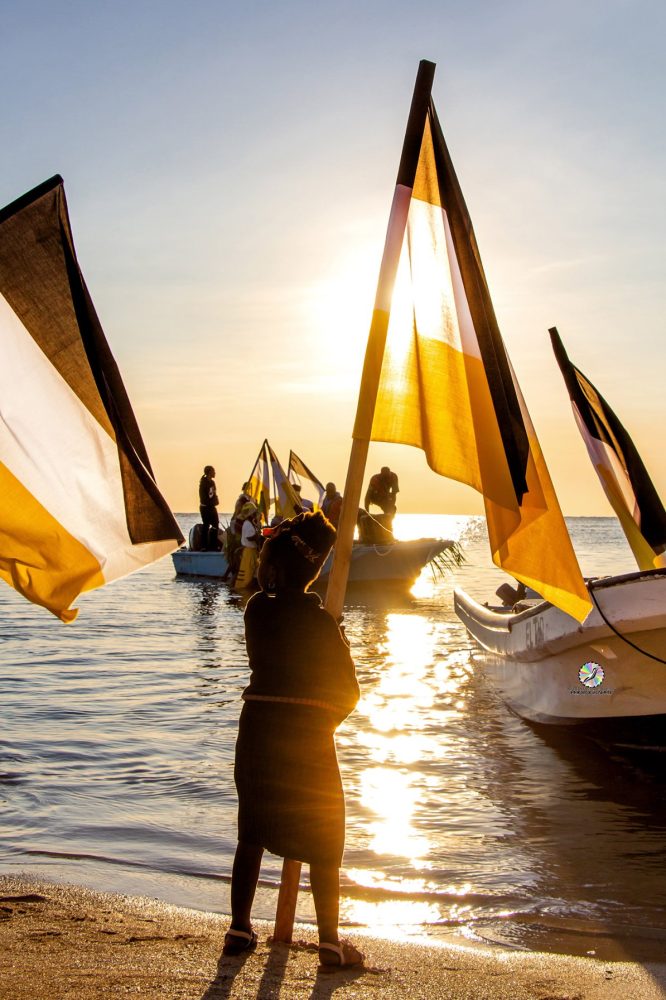 The Garifuna Culture arose in the Caribbean (initially on the island of St. Vincent) from the mixing of the native Arawak people and shipwrecked would-have-been-slaves from West Africa.  Two Spanish slave ships carrying a cargo of peoples from Sub-Sahara Africa enroute to the West Indies floundered off the coast of St. Vincent and the marooned escapees where too spirited and independent to be recaptured and enslaved.  This group of shipwrecked people found refuge on the island with the native Arawak Indians, as did a number of other maroons escaping slavery on other Caribbean islands.  The blending of these two peoples’ knowledge, practices, and bloodlines gave birth to an Afro-indigenous culture uniquely their own and free from the colonial forces ruling the surrounding region.   The Garinagu, or Garifuna as we say here in Belize, are also known as ‘Black Caribs.’  The Garifuna were exiled from St. Vincent to Roatan by the British but this intrepid group re-established themselves and eventually branched out to mainland Honduras, Guatemala, and Belize. 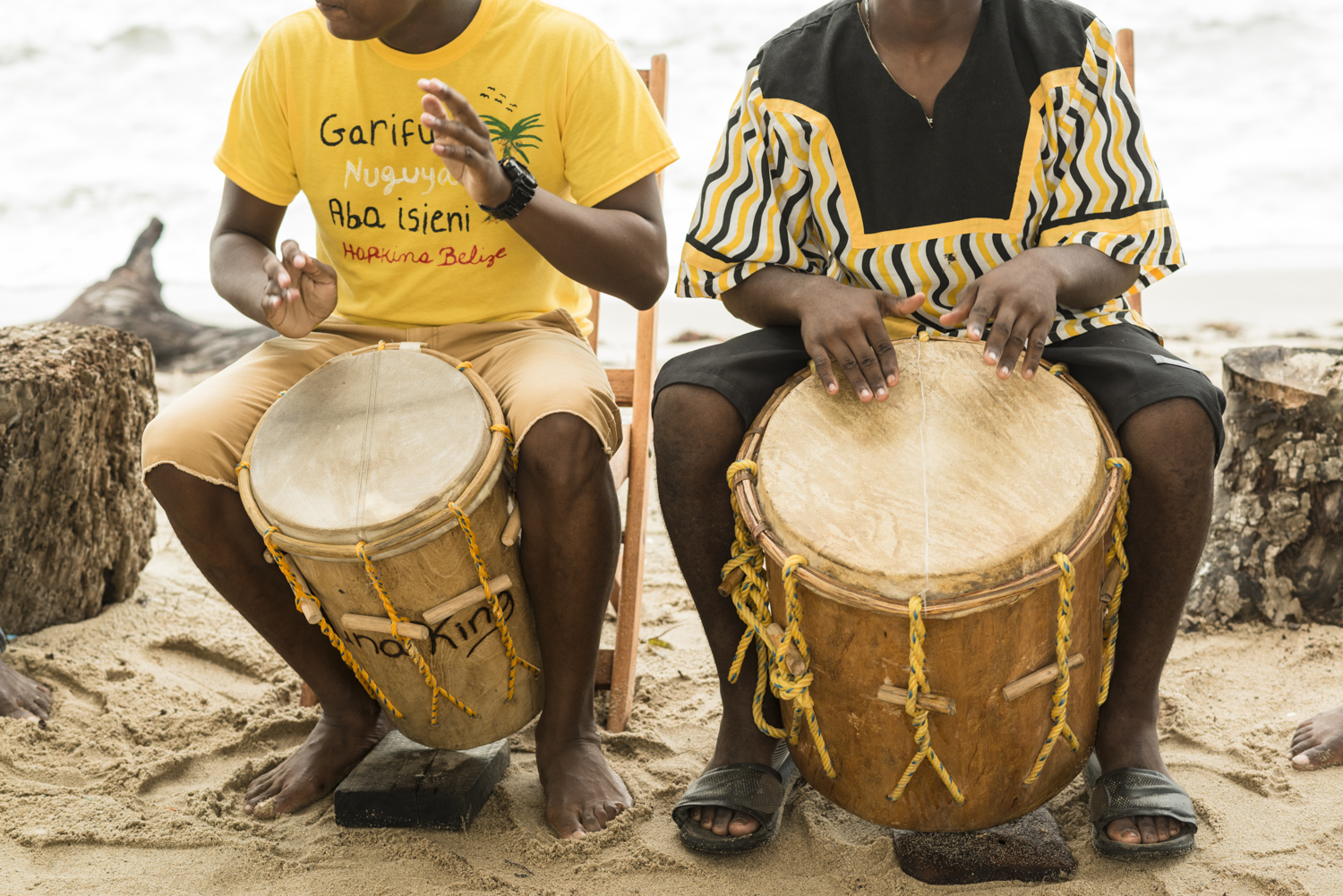 The Garifuna retain their own language, lore, cuisine, and traditional dress.  Drumming, singing, and dancing are an important piece of their heritage.  During the month of November this vibrant culture takes centerstage with various song and drumming competitions held in Belize City, Punta Gorda Town, Dangriga, Hopkins, and Placencia Peninsula’s Seine Bight Village.  On November 19th Belize celebrates Garifuna Settlement Day and festivities typical start the evening before with a Mass and all-night-drumming.  As the sun rises on the holiday, all eyes turn towards the sea searching for the silhouette of men in wooden dories (traditional dug-out canoes typical of the region) as they make their way to shore for the re-enactment of their ancestors’ exile and subsequent landing in their new home. This re-enactment is called Yurumein, which in the Garifuna language translates to ‘Homeland.’  History tells us that the Garifuna carried casava with them on their migration and re-cultivated the crop wherever they settled.  Today, cassava persists as an important part of their diet and is featured in many of the customary dishes. 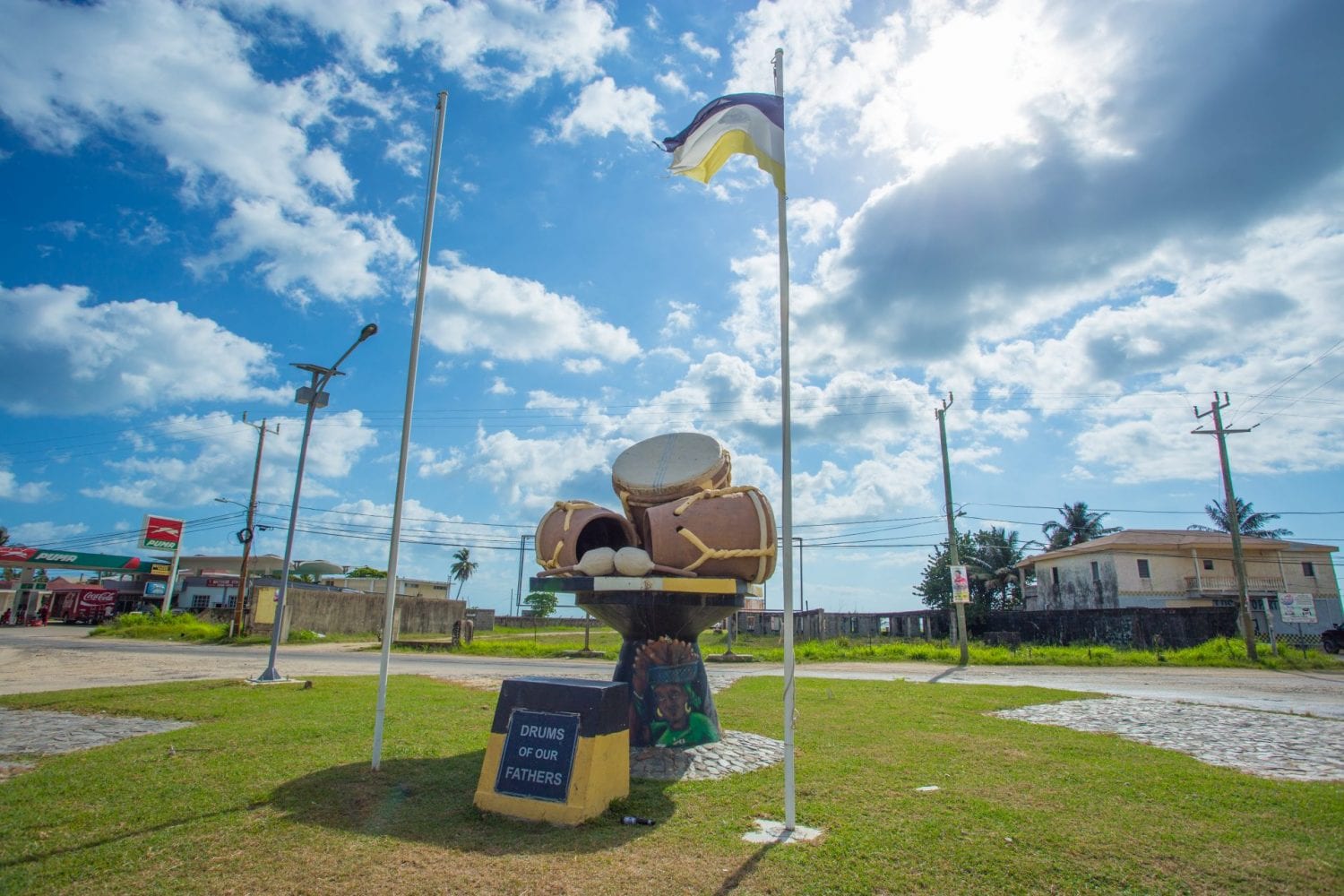 Drums of our Fathers in Dangriga, Belize. Photo by Duarte Dellarole

The town of Dangriga is the first place in Belize that the Garifuna landed upon and settled.  Though there are several other communities of Garifuna throughout Belize, Dangriga is still the Culture Capital of the people.  The name Dangriga can be translated to mean “standing waters” and this seaside town at the mouth of the North Stann Creek River sees a steady stream of tourist traffic as a transfer point to many offshore cayes along the reef.  Joyful drumming can be heard most days in Dangriga but people from outside areas gravitate to town the week leading up to the 19th for parades, ceremonies, singing, dancing, and traditional cooking.

Visitor to Belize can learn more about the fascinating Garifuna people and their history by booking a cultural education tour.  Choose an emphasis on drumming and language or cooking and foraging practices.  Dangriga also has a small, three-room, museum worth a quick visit as the staff are extremely friendly and knowledgeable.

Megan's motto is "work less, play more" and that mantra became the inspiration for both her move to Belize in 2017 and the life she chronicles on her personal blog. She's always on the lookout for the next adventure and delights in daily opportunities to learn more about the fascinating cultures, cuisines, history, and landscapes of this beautiful country. Megan's background in Social Services and Broadcast Media has forged her into a Jack-of-many-trades and a master of none. But that's just fine with her, as she values experiences over achievements.

Why Winter is A Great Time to Visit Ambergris Caye, Belize

If You’re Looking For Fun In Ambergris Caye, This Beach Resort Promise Plenty Of It

Chasing Waterfalls: Use This Guide When Exploring These...

A Brilliant Escape in Belize: Go Private on...

Where to Go For Holidays On A...

How to Plan a Friends Vacation To...