There is a special reason why the flag of Belize is one of a kind.  It is the only flag in all the world depicting human beings.

Belize became independent in 1981. The party in power at that time was the PUP (People’s United Party) and the UDP (United Democratic Party).  Their party colors were blue and red respectively. Prior to the date set for Independence, the government launched a competition for a flag for the new nation of Belize.  The competition was open to the public and sponsored by a bi-partisan committee—The National Symbols Committee. Several designs were submitted and the committee decided on one design proffered by two Public Officers, Mr. Everal Waight, Permanent Secretary, and Mr. Inez Sanchez, Chief Education Officer. Waight had been head of Radio Belize, the only station at that time.

The UDP did not propose a flag but called for a flag that could rally all citizens, regardless of their political affiliation. The winning design was an azure flag with red gules stripes at the top and bottom, representing 1/5 of the total hoist (width) of the flag, and a white circle with the coat of arms in the center. 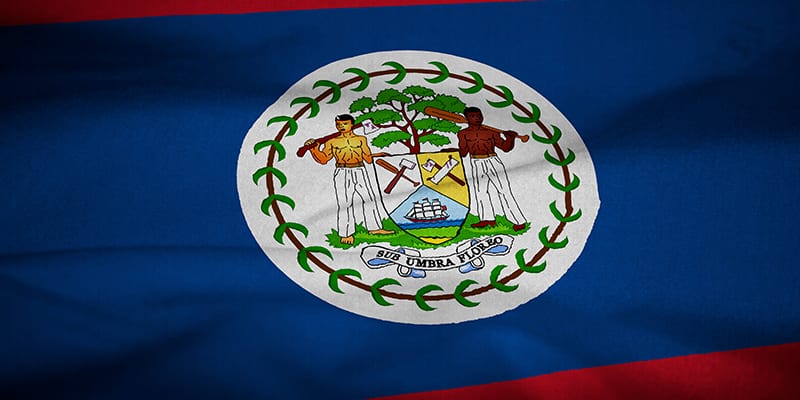 The shield of the Coat of Arms is divided into three sections by a vertical line and an inverted V.  The base section depicts a ship in full sail on the waves of the sea. The two upper sections show the tools of the timber industry in Belize: a paddle and a squaring axe in the right section, and a saw and beating axe in the left section.  Supporting the shield are two woodcutters; the one on the right holding a beating axe over his right hand, and the one on the left holding a paddle over his shoulder with his left hand. Above the shield rises a mahogany tree.

Below the shield is the motto, Sub Umbra Floreo, Latin for Under the Shade We Flourish. The Coat of Arms embodies an important aspect of the history of Belize, as the mahogany industry formed the basis of the economy in the 18th and 19h centuries.

In the draft sent from England, one woodcutter meant to be Mestizo was a rather pink Caucasian. The  Archaeological Commissioner, Harriot Topsy,  was brought in to ensure that one figure was authentic Latino-Mestizo in aspect, and the other a true Afro-Belizean both in color and features.

This is the flag that pervaded.  All other flags in the world depict animals or inanimate symbols.  The Belize flag puts humankind at the forefront.