Throughout the past few years, Belize has landed itself having one of the most enriching culinary scenes in the region. With Mexico to the north, Guatemala to the west and south, and the Caribbean to the East, Belize has become a microcosm of all the rich foods found on this side of the world. Because of this, it makes sense each region in Belize would also have its own ‘must-try’ food or dish that’s considered a specialty. What you may find at the very northern tip of Belize will seem vastly different once you’ve made your way to the southern edge. However, this does not mean that these dishes – and their avid enjoyers – don’t intersect. In fact, this is what makes Belize, Belize. Every single dish across the country is enjoyed by all, no matter the culture or background. If you’re following a foodie guide to hit all the major region specialties while in Belize, here are a few you cannot miss.

Of course, Orange Walk and Corozal’s delicious cuisines are more than just tacos. Still, there’s a reason many from the city make the 1.5-drive up to the northern town of Orange Walk for a bit of tomato sauce-doused tacos. This region has held the title of taco kings & queens for more than a decade, even though many “Orange Walk tacos” replicas have sprouted up in other districts. The tacos are rolled-up corn tortillas, with shredded chicken or pork inside. Inside, there might be hot sauce, chopped onions, or shredded cabbage. While a slew of taco stands are peppered throughout town, what makes these specific tacos special is the way the Orange Walkeños cook their meat. According to decade-long taco connoisseurs, the key is letting the chicken cook overnight to get the right taste and consistency. That’s dedication! So if you find yourself here up north, don’t be afraid to try some authentic tacos where you’ll get three for just $1BZD. 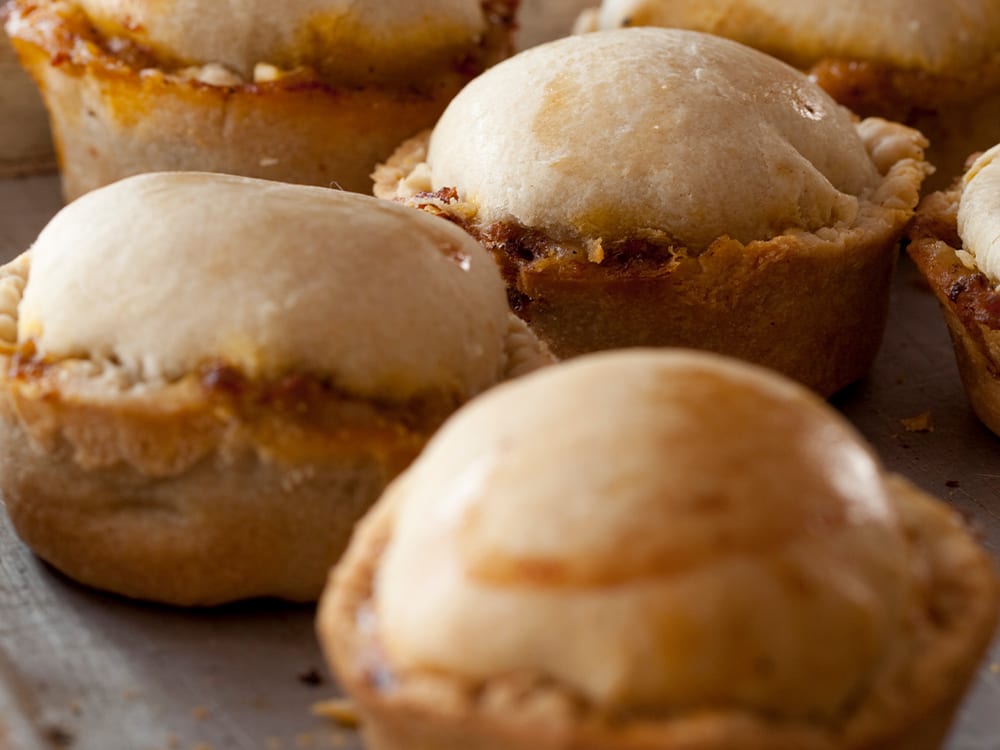 One thing that cannot be denied is the way many Belizeans fiercely advocate for meat pies. These palm-sized dough pies are stuffed with delicious chicken or beef and filled with nice, hot gravy. Each Belizean has their own way of eating a meat pie – whether calculatingly, using the crusty “lid” as a spoon, or diving right in, no precious second wasted. These golden meat pies are a common breakfast item, and one we recommend you taste at least once while in Central Belize. When in Belize City, head to the nationally-known famous Dario’s meat pies to grab a quick breakfast. Out on errands? No problem, vendors on their special bicycles are carrying around enough meat pies for the whole neighborhood in their coolers. Snag one for a mere buck-fifty, and head on your way. Some others we recommend include Pou’s Meat Pies, Ladyville Meat pies, and Belize Meat Pies. 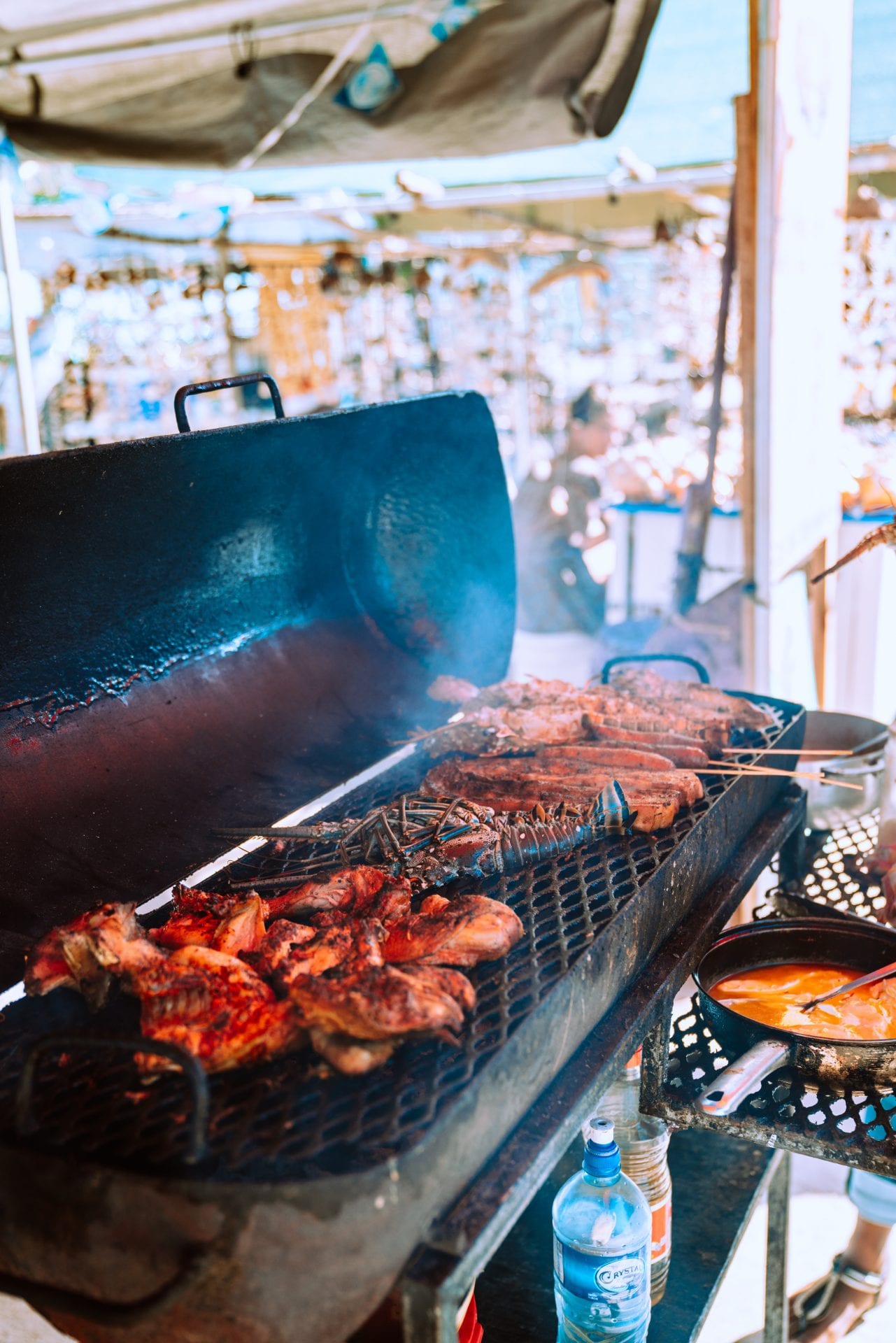 San Ignacio Town knows its way around a great barbecue. About two hours away from the international airport, you’ll find the twin towns of San Ignacio and Santa Elena. Here, they reign in deliciously grilled food. This weekend favorite is often available at many tented stalls touting a “finga-lickin’ BBQ!” sign (finger-licking.) A plate of perfectly barbecued ribs, chicken breasts, or pork chops is never alone. On the side, find coleslaw or potato salad, rice and beans, or freshly hand-made flour tortillas. A hefty plate will run you about $10BZD and you’ll be ready to take a nap after indulging. Western Belize is particularly popular for this cuisine; pedestrians, motorists and those busy doing household chores on a Saturday can’t resist the convenience of a quick, scrumptious plate of BBQ. 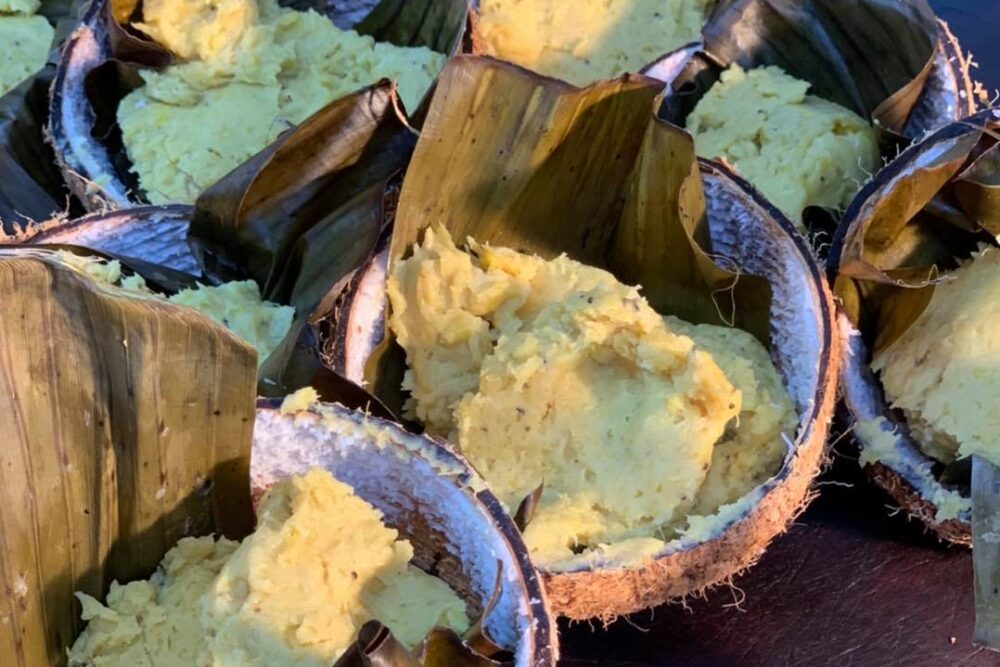 This spice-ridden coconut-based soup is a staple of Garifuna culture. The traditional dish includes mashed plantains and fish, where Belizeans opt to have an entire medium-sized fish seasoned to perfection. When visiting the southeast coast, you can book a traditional Garifuna Cooking Class in Hopkins Village and learn how to make this exquisite dish. The experience involves the traditional way of mashing plantains; with a giant wooden mortar and pestle, the spice-filled soup is boiled until it’s the ideal consistency. The Garifuna culture is known to use coconut and seafood as the key ingredients in many dishes for authentic flavor and history.

Often cited as an ice-cold beer’s best friend, ceviche is a dish best savored near the sea. When venturing to any Ambergris Caye, like Lily’s Treasure Chest or Palapa Bar & Grill, make sure to order this popular appetizer that can be made out of either shrimp or conch. Prepared with pickled cilantro, onions, tomatoes, and freshly squeezed lime, the raw cubed seafood sits to marinate. You can enjoy it with some crispy, perfectly golden tortilla chips. And for a kick, top it off with some diced habanero. Indulging in this savory dish is hard to beat; only edged out when sitting at a beachside bar gazing out to the Caribbean Sea.

5 Wild Belize Experiences Everyone Should Try At Least Once