Native to southern Mexico and domesticated over 9,000 years ago, corn-like wheat in Europe and rice in Asia—rapidly became the staff of life for millions of people across the Americas.

Today, it remains a culturally and spiritually powerful staple in the diet of many regional cultures, including the Kekchi, Mopan, and Yucatec Maya of Belize. 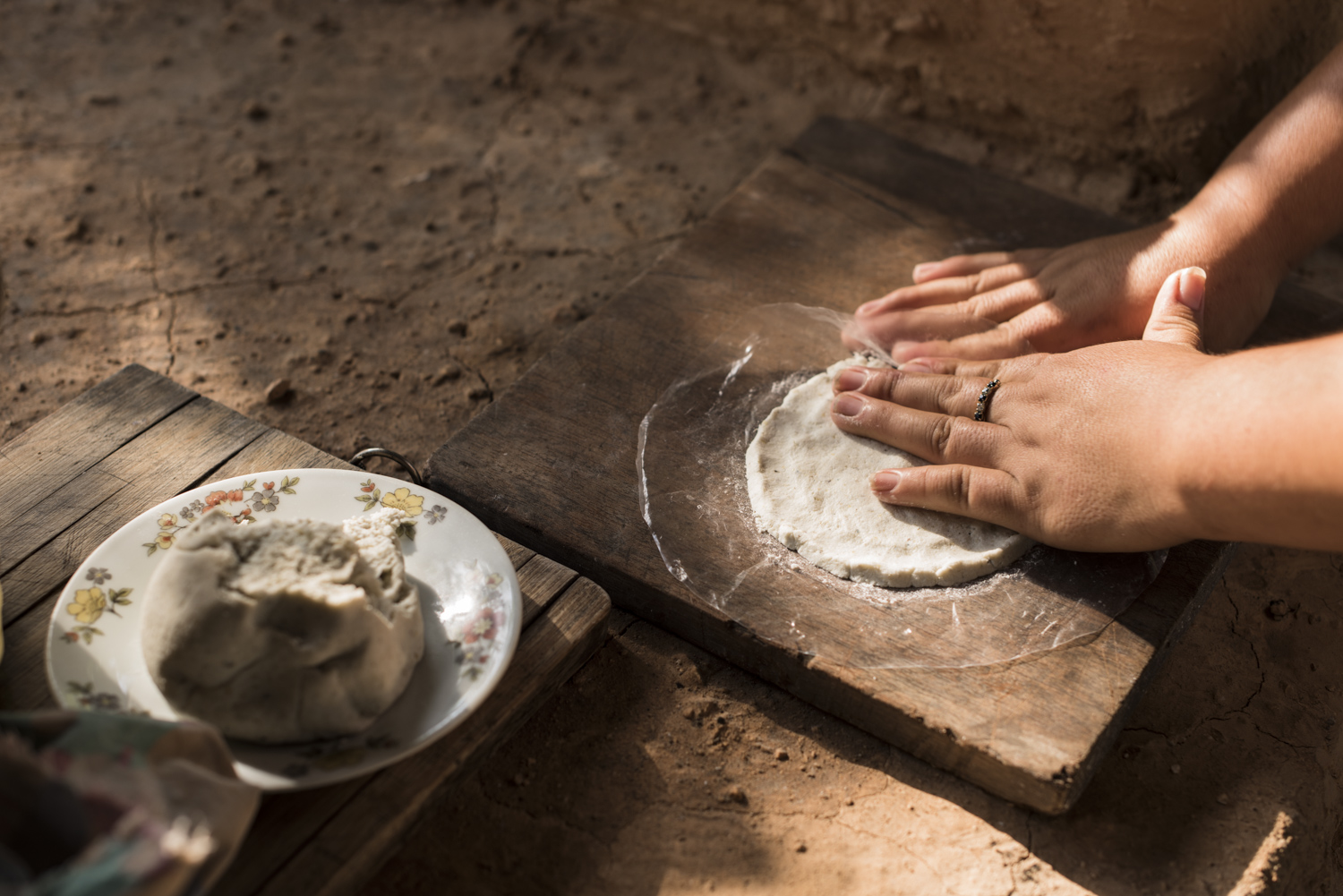 In a ringing endorsement of the power of corn, the Kekchi Maya creation myth—the Popol Vuh—states that the creator gods, after failing with other materials, were finally successful at making humans with fully functioning hearts and minds only when they molded them out of corn dough.

Today, the popularity of corn has spread beyond its indigenous roots to be enjoyed by all cultural groups. The term “corn foods” refers to the many different dishes prepared with corn in the form of corn masa(1). Corn masa is a wet dough made by boiling mature hard grains of corn in water, with calcium carbonate, in the form of a white powder called cal, added to the pot. In Belize, cal is made in wood-fired outdoor kilns in the foothills of the Maya Mountains along the Hummingbird Highway. Chunks of limestone quarried out of the adjacent slopes are heated until they break down into a powder. Boiling corn with calcium carbonate causes the shell of each grain to soften so it can be washed off. This process is called nixtamal. The soft de-shelled kernels are ground into masa dough, used to make corn tortillas, tamales, and dozens of other dishes.

Some of the most popular Belizean foods made from corn masa are:

Tamales are a famous corn-based delicacy with a millennial history in Belize, are made across Central America by taking corn masa and spreading it on a banana leaf or aluminum foil. The center is filled with some variety of cooked meat or vegetable and then folded into a tight package and steamed in boiling water until firm.

1. They are usually filled with bone-in meat, making it entirely possible that you may encounter a whole chicken leg inside your tamale.
2. Belizean tamales are wrapped in the leaf of a rainforest plant called waha, or if that is not available, in a banana leaf. Tamales are plentiful across Belize and are made large enough that one is sufficient for a filling and, at $2-3 each, a super-affordable lunch. 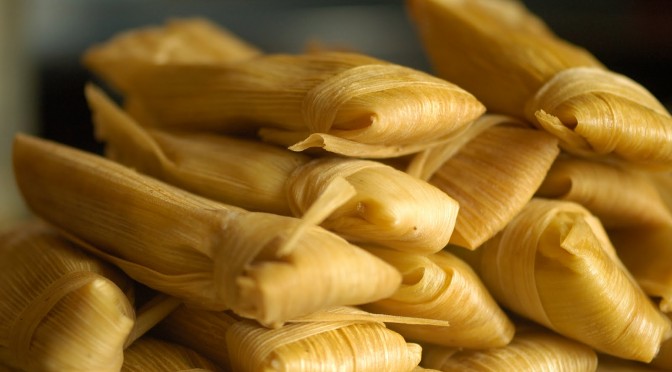 Dukunu and Tamalitos are tamales made from finely grated fresh green corn, wrapped and steamed in the fresh corn husk, usually with no filling. Dukunu, a West African name, refers to green corn tamales that contain coconut milk, while tamalitos do not. They are often served alongside stewed meats, their sweet starchy nature a perfect side to the savory entree.

1) WHETHER THE CORN MASA HAS BEEN PRE-COOKED LIKE POLENTA IN A POT PRIOR TO MAKING THE TAMALES DETERMINES THE TEXTURE—FLUFFY OR DENSE LIKE AL DENTE PASTA—AND THUS THE VARIETY OF TAMALES BEING MADE. IN BELIZE TAMALES MADE WITH UNCOOKED CORN MASA ARE OFTEN CALLED BOLLOS.

Panades are deep-fried, half- moon corn masa pastries seasoned with red recado and filled with pulled seasoned fish or refried beans. Fried to perfection, these golden half-moons of crisp-on-the-outside yet tender-on-the-inside savory goodness are best eaten hot and fresh, topped with a spicy vinegary habanero and onion sauce.

Salbutes are made by patting recado-seasoned-corn masa into the shape of a corn tortilla and then deep- frying it. The masa puffs up and then collapses in on itself, creating a soft surface piled high with richly seasoned pulled chicken, salsa and cheese.

Garnaches are produced by frying an already baked corn tortilla until crispy, turning it into a giant tortilla chip which is then slathered with a layer of refried beans, grated cheese, and tomato salsa. This brings us to the great garnaches controversy: do you or don’t you add a squirt of ketchup? Purists say NEVER, but others argue the sweet/salty contrast is a must. 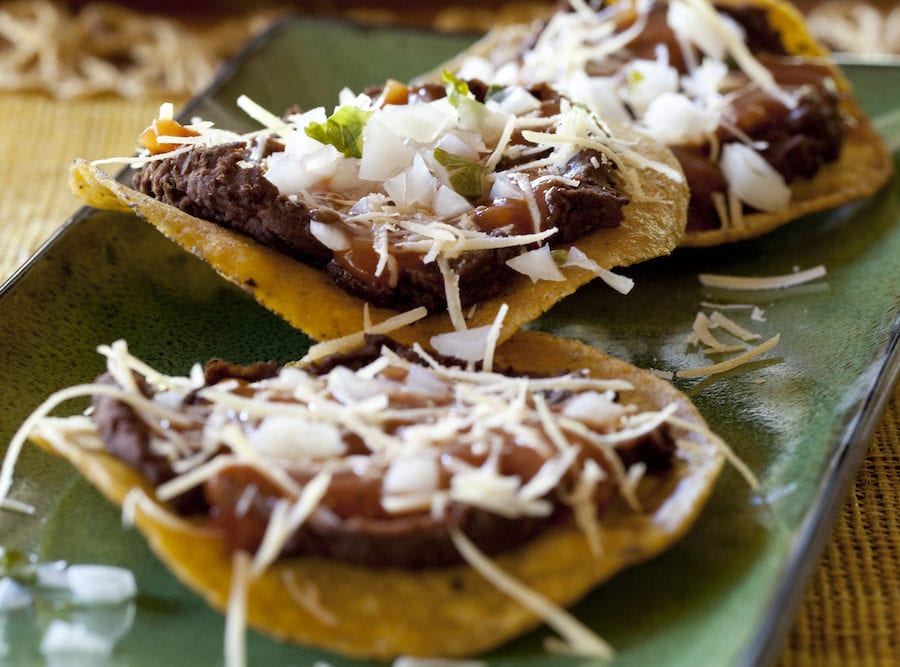 Tacos in Belize, everyone knows that Orange Walk District has the best tacos, but the cigar-shaped, Belizean-style “rolled tacos” can be found across the country. The soft corn tortilla is usually rolled around pulled chicken or pork that has been slowly braised with red recado, onion, garlic and other seasonings and topped to taste with homemade habanero hot sauce. At 2 for $1, these tasty treats can’t be beaten for a quick breakfast, light lunch or even mid-afternoon snack.

DISCOVER THE POWER OF CORN WITH A CULTURAL COOKING CLASS 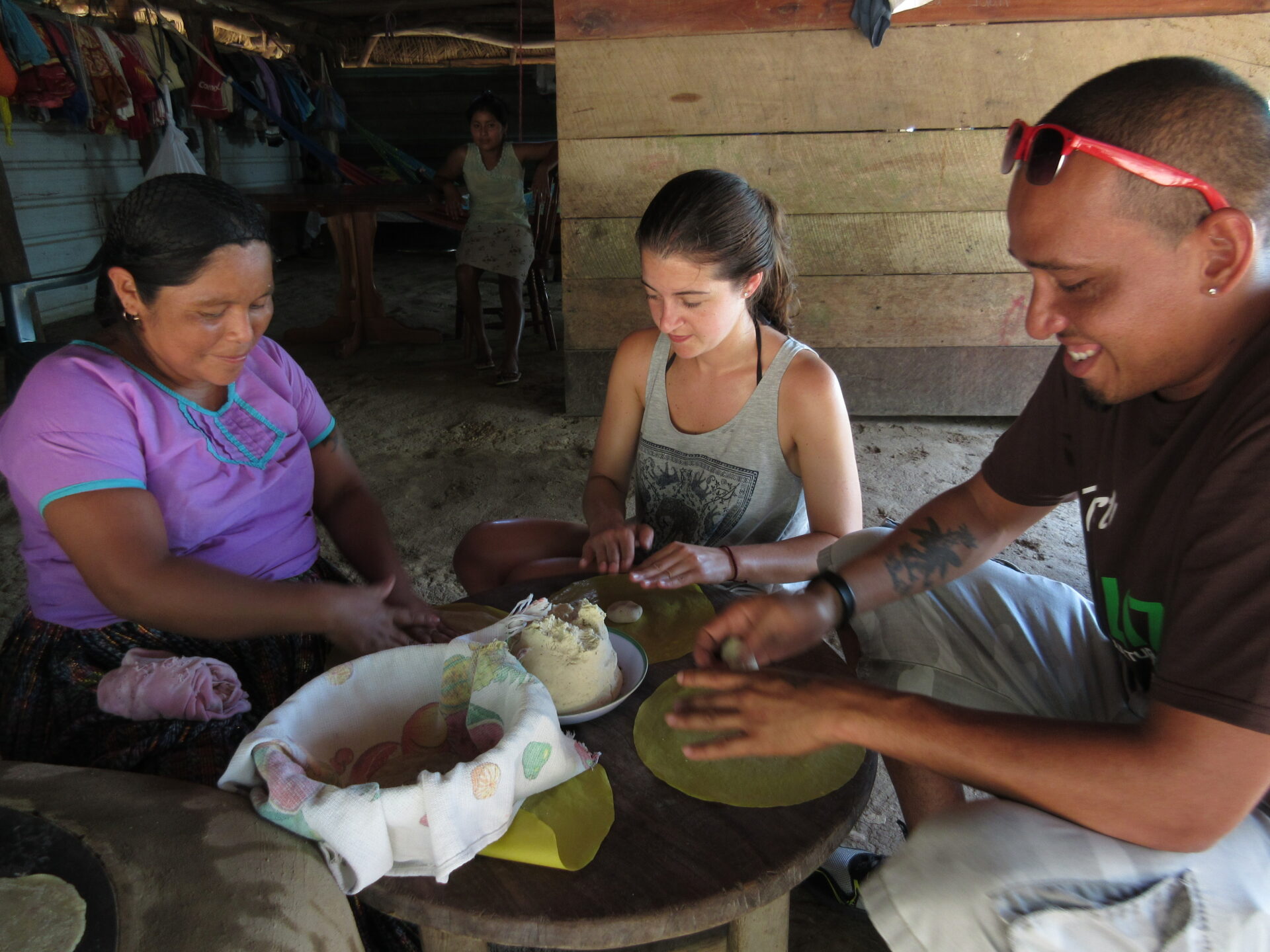 Get hands-on when shadowing a traditionally cultural cook while on a food tour. Image courtesy Lyra Spang/Taste Belize Tours

While you will find these popular corn masa-based meals and snacks all over Belize, there are also dozens of corn dishes that are relatively unknown outside of certain districts or cultural groups.

In our southernmost region, Toledo District, poch (a dense plain corn masa tamal made without filling, usually served with soup) and shuut (similar to tamales but flatter and filled with refried beans) are exclusively associated with Belizean Kekchi and Mopan Maya cultures and are unknown to Belizeans from other parts of the country. In the Cayo District, a special drink made from black corn and allspice called Ix’Pasha is prepared and offered to the ancestors on All Souls Day (called Los Finados in Belize) but is little known outside of the Mopan and Yucatec Maya and Mestizo communities of this region.

Taking a cooking class or cultural tour to a Maya community is a wonderful way to begin to learn hands-on about the extensive repertoire of outstanding and meaningful dishes made from corn in our beautifully diverse Belize.

5 Of The Best Villas For Families in Belize Are At This...

Love Is All You Need: All-Inclusive Romance At The Award-Winning Victoria House

The Chocolate Festival of Belize Returns This May 2022

Staying Off The Beaten Path With A Private (Island) Vacation Rental This...

“I Spent 3 Days On A Private Island In Belize. Here’s What...

Braving The Deep Blue: Recounting The Treasures of Half Moon Caye