Terryl Godoy is a gentle, soft-spoken gentleman who lives in San Pedro, Ambergris Caye.  He is both Musician and Painter, turning out art for 23 years.  In his early career as a painter, Terryl was known as “Man at Work.” He could be seen on the streets of Belize carrying his easel and tools, painting in the open air to capture the light and atmosphere of the city.  He painted streets and old buildings. The streets were his office for what he considered to be his full-time job. 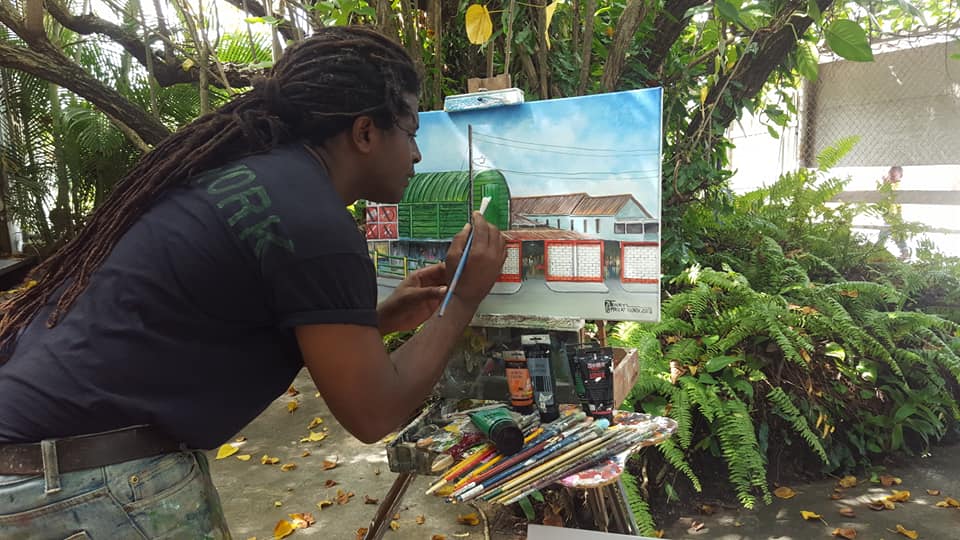 Terryl goes straight to his subject.  He has no studio/no gallery uses no palette, preferring instead to mix his paints in his hand. He doesn’t do portraits, and all his paintings are first drafts, no sketching, just going straight to his subject with paints. His goal is to preserve the culture and look of Belize City. Indeed his street scenes give the sense that one could step right into them.

Terryl says that when he was a child, his big brother Mark used to paint, and Terryl used to go touch and explore his brushes and paints.  His brother took him under his wing, and Terryl was on his way. He started by copying from magazines.  There he saw a picture of a man painting in a street, and the seed for his idea took off.

In 1992, Terryl got to represent Belize in Trinidad at Carifesta.  This opened his eyes to many possibilities and made him realize how little exposure we have to our other Caribbean neighbors. Like a roving ambassador to Belize, and with his spirit of adventure and eagerness to challenge himself, he lived and learned and shared in St. Lucia and Barbados, as well as Jamaica. He even appeared on Television on their Caribbean Dateline.

Terryl was bitten by the travel bug and set out to visit England.  With little money, he reported to the Belize Embassy in London. There he was received and oriented and through a series of amazing chance events, ended up going to Spain, Holland, and Belgium.  Here he learned to market himself. People found his work exotic. The light and color of a Dutch sky is certainly opposite to Belizean skies.  Still, Terryl brought to it his own intensity and style.

It has always been my opinion, that creativity and talent are best accompanied by a passion and willingness to take risks.  Terryl is one such risk-taker, and his work continues to evolve and reflect his spirit.

Where to be on New Year’s Eve!

Where To Go In Belize, Based On Your...

All About The Pizzeria at Turtle Inn Serving...

Looking for the perfect gifts from Belize for your

Lighthouse Reef is one of Conde Nast Traveler's mo